14 European sites shortlisted for ‘The 7 Most Endangered’ Programme

On the eve of the International Day for Monuments and Sites, the leading European heritage organisation Europa Nostra unveils 14 monuments and sites in Europe shortlisted for ‘The 7 Most Endangered’ programme. An international Advisory Panel composed of eminent experts selected these threatened landmarks – including historic city centres, archaeological sites, religious buildings and military fortifications – among 40 nominations submitted by civil society organisations and public bodies from 21 countries. The final list will be announced at Europa Nostra’s 50th Anniversary Congress in Athens on 16 June. Rescue missions will be organised and preliminary action plans proposed until December by a team of heritage specialists together with technical and financial experts from the European Investment Bank Group, founding partner of this programme. 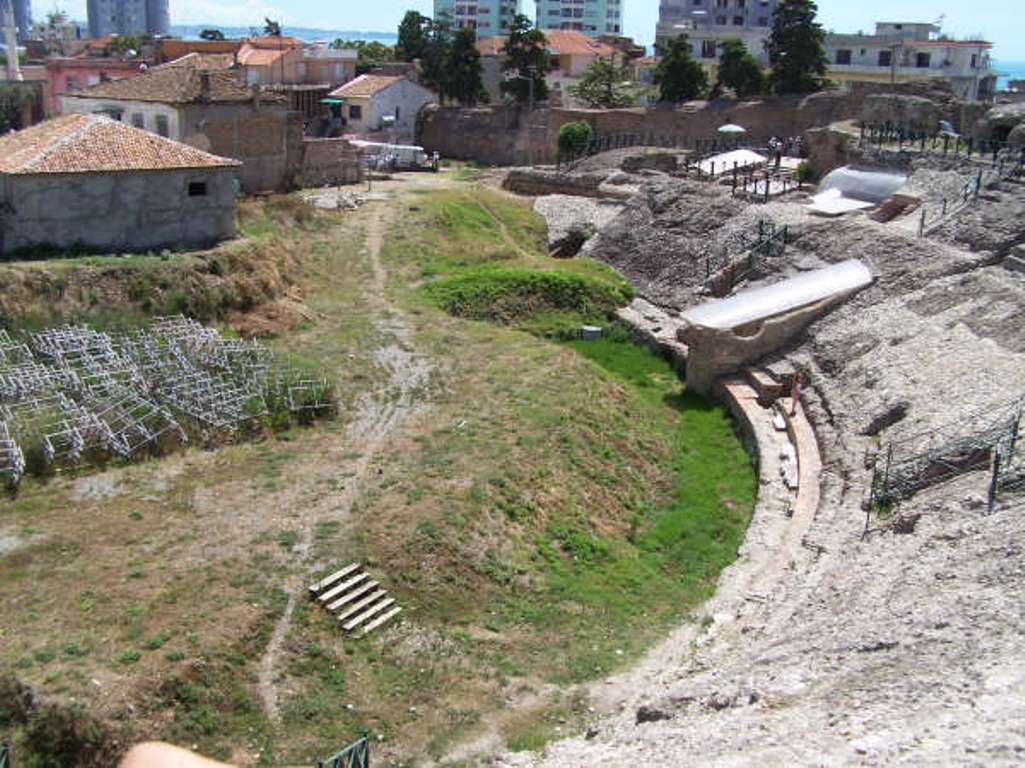 Roman Amphitheatre in Durrës, ALBANIA. Photo: Courtesy of the Association for the Development of Cultural Tourism, Tirana, Albania

“With this new advocacy programme, Europa Nostra aims not only to identify the most endangered monuments and sites in Europe but also to launch a true call for action. By sending multidisciplinary teams of experts to visit the selected sites, together with our partners, we will seek to contribute to finding sustainable and viable solutions for the future. In this way, we hope to inspire and encourage action by various public and private organisations also in other places in Europe and beyond”, stated Denis de Kergorlay, Europa Nostra’s Executive President.

The members of the Advisory Panel stressed that the preservation of the cultural heritage of Europe is a huge task and without any doubt a common responsibility for all parties involved. Investing in heritage is not a luxury; it is a contribution to overcoming the present crisis. This rationale also explains why the European Investment Bank Group, represented by the EIB Institute, is the founding partner of ‘The 7 Most Endangered’ programme. Its contribution will be to provide analysis and advice on the feasibility of the rescue plans and on how funding could be obtained, e.g. by drawing on EU funds or, in appropriate cases, on loans for the endangered sites selected for the final list.

‘The 7 Most Endangered’ programme was launched last January, inspired by a successful programme run by the US National Trust for Historic Preservation. ‘The 7 Most Endangered’ is not a funding programme. Its aim is to serve as a catalyst for action and to promote “the power of example”. It will bring various public and private parties together and identify possible sources of (European) funding. After the summer, teams composed of heritage experts from Europa Nostra and its member organisations as well as of technical and financial specialists from the European Investment Bank Group or the Council of Europe Development Bank, an associate partner of the programme, will visit the selected 7 monuments and sites. In close consultation with local stakeholders, they will assess existing problems and sketch viable and sustainable action plans for each one. All rescue missions will report back before the end of the year and the preliminary results are due to be presented at the European Heritage Policy Conference organised by Europa Nostra in Brussels on 5 December.

“Europa Nostra is very pleased to have received in this pilot year a large number of nominations. I would like to pay tribute to all nominators and their tireless effort to save those threatened places. Europa Nostra is committed to giving support to all nominated sites. Our aim is to create a true European momentum for saving endangered heritage. This will help revitalise local communities and also enhance the uniqueness of Europe”, highlighted Denis de Kergorlay.

14 European Sites shortlisted for ‘The 7 Most Endangered’ programme

Roman Amphitheatre in Durrës, ALBANIA
The discovery of this magnificent early 2nd century amphitheatre, which remained unknown to the world until the 1960’s, put the ancient city of Durrës back on the map of historic sites in Europe. It also poses a major challenge to ensure a successful integration of the site into the urban fabric and local community of Durrës.

St. Paul and Peter Church, Aragatsotn, ARMENIA
Rescuing the remains of one of the earliest Christian structures dating back to 5th century, seriously endangered by regular flooding, can only be accomplished with international expertise and support. The present alarming situation calls for urgent action.

The Buffer Zone of the Historic Centre of Nicosia, CYPRUS
A brilliant example of how cultural heritage can help transcend political conflicts and contribute to the process of reconciliation. Conservationists from the Greek Cypriot and Turkish Cypriot communities have worked together with the UN to produce a European Union / Europa Nostra award-winning master plan for the revitalisation of the lifeless 1.5 km corridor which crosses the historic city of Nicosia, and the time has come for the plan to be gradually implemented.

Vauban’s Fortifications in Briançon, FRANCE
Designed in the 17th century to guard the city, this masterpiece of mountain fortifications now needs to be protected from further decay and given a new and viable use. Due to its size and heritage importance, already recognised by UNESCO, the local, national and international communities are called to team up to save it.

Gaslight and Gas Lamps in Berlin, GERMANY
These romantic, historically valuable and perfectly functioning gas street lights have been part of Berlin’s cityscape for almost 200 years. Today no other city in the world has preserved gas lights to such a scale which confers to the streets of Berlin their unique character. The proposed replacement of gas lights with electrical lamps is opposed by the local community and numerous tourists who are strongly attached to the existing gas lamps.

Former Royal Estate of Tatoi, near Athens, GREECE
This rare and large ensemble combining history, architecture and nature, created from 1872 by King George I but today endangered, is an important “lieu de mémoire” for Greek citizens. Located in the vicinity of Athens, it can be restored to its previous glory for the enjoyment of numerous visitors and can once again become economically viable. Public support is strong but commitment both of the government and the business world is needed for the estate’s successful regeneration.

Citadel of Alessandria, ITALY
It is one of the greatest remaining 18th century military fortifications in Europe with a rich history linked to the Napoleonic times and to the Unification of Italy. In 2012, the Citadel of Alessandria was voted by the citizens the most loved monument in Italy and it is on UNESCO’s Tentative List. Its restoration and revitalization is a huge challenge, both in financial and technical terms, which has to be tackled with widespread (inter)national help.

Renaissance Monastery of San Benedetto Po, near Mantova, ITALY
This 15 – 16th century monastery was heavily damaged by the May 2012 earthquake. This demonstrates that natural disasters continue to be a threat to Europe’s cultural heritage. Given the great historic and artistic importance of this renaissance building, and its impact on cultural tourism in the wider region, the public authorities at all levels should give a higher priority to rescue measures and also to adequate prevention plans for the future.

Manueline Style Monastery and Church of Jesus in Setúbal, PORTUGAL
Recognised as a symbol of Europe’s history – the setting for the ratification of the signature of the Treaty of Tordesillas in 1494 between Spain and Portugal, which paved the way for Europe’s expansion both to the Americas and to the Far East – the Monastery and Church of Jesus is in an advanced state of decay which urgently calls for European support and solidarity. It is expected that the revitalisation of this “European Heritage Label” site would become a catalyst for a true renaissance of the important but neglected historic city of Setúbal.

Roşia Montană Mining Landscape in Transylvania, ROMANIA
The landscape of Roşia Montană and its surrounding villages has for more than three millennia been masterfully transformed by mining activities. However, the present open-cast gold mining project would seriously threaten its unique heritage and environment, including in situ roman mining machinery. This is a typical example when long-term vision and sustainability are at risk of being sacrificed for the pursuit of very short-term gain.

Neolithic Archaeological Site of Vinča-Belo Brdo, near Belgrade, SERBIA
This prehistoric site is highly threatened not only by the structural lack of funds but also by its proximity to the Danube’s river bank. The site’s basic infrastructure needs to be improved to allow the continuation of scholarly excavations, access for tourists and enhanced interaction with the local community. With European expertise and funding, this site could develop into a valuable research and educational site on Europe’s Neolithic era and a key tourist attraction in the Danube Valley.

Neighbourhood of El Cabanyal-Canyamelar in Valencia, SPAIN
The inhabitants of El Cabanyal-Canyamelar in Valencia campaign to save their homes from destruction caused by the proposed new road project. They strongly believe that this unique historic urban neighbourhood, located close to the sea, should be preserved for present and future generations, with ample opportunities for sustainable and long-term investment and development.

St. George Armenian Church in Mardin, TURKEY
The nomination of this derelict church with foundations going back to the 5th century, which served the large Armenian population until the beginning of the 20th century, reflects the commitment of the heritage community in Turkey to preserve the tangible witnesses of the country’s multi-cultural history. The heritage of the ancient town of Mardin reminds us that through the centuries this city has been a melting pot of cultures and religions. Today, this heritage has great potential for sustainable tourism and economic development.

The Historic City of Hasankeyf and its Surroundings, TURKEY
If the construction of the Ilısu hydroelectric dam continues as foreseen, 80 percent of Hasankeyf’s historic monuments will be flooded within the next decade. At present there is no internationally recognized scheme for their conservation, preservation or relocation. If it would be spared from inundation, Hasankeyf has the potential to provide a sustainable anchor for local and regional economic development, providing visitors and scholars with a contextualized record of shared human history, spanning the continents of Europe and Asia.

Information and Photos on the 14 European Sites