This year, the Awards’ Juries granted Special Mentions to 11 heritage achievements from 9 European countries taking part in the Creative Europe programme of the European Union. 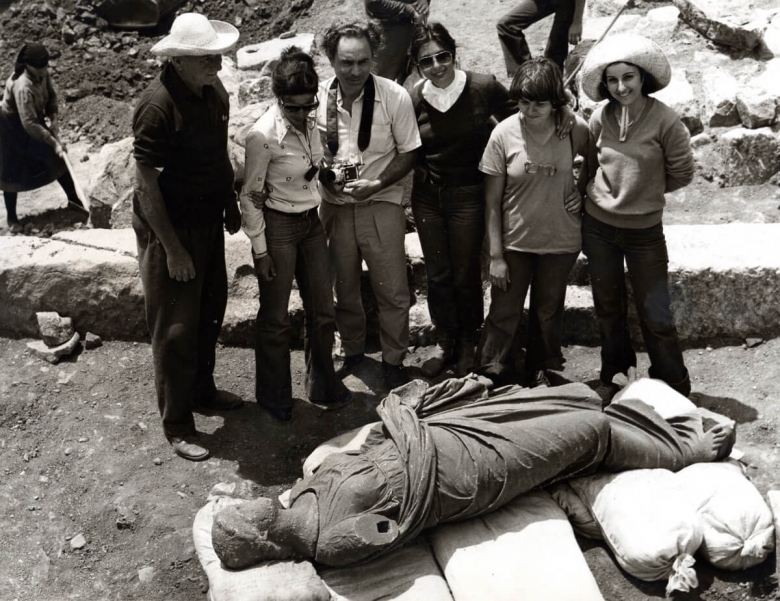 The archaeologist Prof. Petros Themelis, pictured here third from left, was given the Special Mention of the Jury in category Dedicated Service for his lifetime of dedication to cultural heritage.

Adaptive reuse of a Clergy House into a Library, Pont-A-Celles | BELGIUM
Constructed in the 18th century, the Clergy House served for decades as the centre of religious life in Pont-A-Celles, Belgium. However, as a result of a decline in religious interest starting in the 1990s, the municipality decided to transform the building into a communal library. The jury appreciated this excellent instance of adaptive reuse, stating that “it is an exemplary effort of a small local municipality to recover an emblematic building for new community and cultural use.”
More information: www.pontacelles.be/bibliothequepontacelles.wordpress.com

#ShareKambanite – revitalising and socialising a monument | BULGARIA
On the occasion of the International Year of the Child in 1979, the Kambanite monument was erected as a meeting ground for children from all over the world, to exchange knowledge and culture. After a period of neglect following the fall of communism in Bulgaria, the #ShareKambanite project was founded to revitalise the site through renovation, cleaning operations and communal activities. The Jury praised “the recognition of the cultural value of recent European history with modest means, reintegrating a monument into a public park.”
More information: spasisofia.org/en/projects/kambanite-monument

Log Church of St. Peter and Paul, Darosava | SERBIA
In 2014 the roof of the Log Church of St. Peter and Paul in the village of Darosava collapsed under a tree that fell during a heavy storm. The religious site, built in 1832, was in dire need of reconstruction works. The jury was impressed with the meticulousness and inclusivity of the rehabilitation project, citing “a community effort using traditional techniques to recover an important heritage building after a dramatic event.”
More information: www.kulturnonasledje.com

Scientific archives of PSL: a common heritage | FRANCE
This initiative set out to digitise and preserve the scientific heritage collections of all the institutions connected to the Paris Sciences & Lettres – PSL University. The jury was impressed by the scope of the project and the opportunities it had created for future academic research: “The presented file implements an exemplary interdisciplinary approach which allowed to apprehend very diverse archival and documentary elements to offer a homogenous and coherent inventory thanks to the rigorous protocol made by a large number of well-coordinated experts. The digitised tool allows wider accessibility of the results of this research for the European scientific and literary community.”
More information: bibnum.explore.univ-psl.fr/s/psl/page/accueil

Scanning, Digital Restoration and Contextualisation of Dacian artefacts | ROMANIA
This project has created a database of at least 500 artefacts, as well as a digital reconstruction of 30 monuments from the Dacian culture in the Orǎștie Mountains. The aim is to provide a window on what daily life must have looked like in the capital of the ancient Dacian kingdom. The jury appreciated the project as “a good example of the application of various digitisation technologies, exploring innovative ways of engaging with museum visitors . The digitisation of 500 Dacian artifacts are compatible with the Europeana platform. The result allows public access to the virtual reality of these artifacts, accessible online from the website.”
More information: dacit.utcluj.ro

Conservation Methodology for the Fachada dels Apostols | SPAIN
The Church of Santa María la Mayor in Morella, its construction finished in 1330, has one of the few remaining polychrome facades in Europe, the so-called Fachada dels Apostols. Due to extended exposure to the natural elements and the unique nature of the site, a cautious and comprehensive preliminary study was needed prior to any restoration process. The jury commended this far-reaching project as an excellent example of preparatory material research, in view of conservation of stone polychromy.
More information: sites.google.com/site/proyectoportadadelsapostols

Prof. Petros Themelis | GREECE
Prof. Petros Themelis is an archaeologist who has dedicated his life to conserving, enhancing and managing the archaeological heritage of Greece. He was a member of the Archaeological Service of the Hellenic Ministry of Culture and is Professor Emeritus at the University of Crete. Prof. Petros Themelis conducted numerous excavations in various parts of Greece, discovering, researching and displaying significant archaeological monuments and wider complexes. His most notable achievement is the exploration, research and management of the archaeological remains of Messene, an important ancient city in the Peloponnese. Through continuous excavation campaigns carried out there over the past 40 years, Prof. Themelis succeeded in revealing the central area of Ancient Messene, and in displaying its remains in an attractive and understandable way.

“Roots and movements : 7 writers in Picardy” | FRANCE
Picardy, a northern province of France, has been home to several remarkable writers. The “7 writers in Picardy” online documentary explores the lives of seven of them and the region that inspired their writing, through interviews with their relatives and literary experts. The jury lauded the value of this project for the region: “This is an innovative visualisation of the growing depth of knowledge relating to the literary heritage of Picardy. It provides an important additional dimension to heritage discourse in the region.”
More information:Webdoc « Ancrages-Passages : 7 écrivains en Picardie »

The About Art Nouveau Blog | THE NETHERLANDS
The “About Art Nouveau Blog” is an impressive an ambitious initiative by Olga Harmsen, to map out and comment on Art Nouveau in the Netherlands, and elsewhere in the Europe. The main aim of the blog is to raise awareness about the art movement through book reviews, lectures and cooperation with various other social media platforms. “This is an important celebration of a 20th century movement which was a pan-European phenomenon”, notes the jury, “This project reveals Art Nouveau in its many dimensions and brings it closer to an interested audience.”
More information: aboutartnouveau.wordpress.com

Museum of Looted Heritage | POLAND
Every year on the Night of the Museums, the Utracone Museum cooperates with the War Losses Department of the Polish Ministry of Culture, to broadcast a virtual exhibition on the wealth of Polish heritage and the lamented loss of a multitude of artefacts during war and looting. The project sets out to raise awareness and educate the public about these losses. The jury acknowledged the tragedy of lost cultural heritage, stating that “war, conflict and turmoil leave many countries with serious cultural losses. This project successfully raises awareness of this complex issue using a range of virtual tools.”
More information: www.muzeumutracone.pl

National Network of Traditional Building Masters | SPAIN
An especially endangered aspect of cultural heritage is that of traditional craftsmanship. The National Network of Traditional Building Masters aims to preserve this invaluable trade, by offering the craftsmen a free and accessible way to promote themselves to the wider public. The jury appreciated the importance of the project, noting that “the project gives recognition to traditional artisan craft specialists in a variety of disciplines. It creates a platform that celebrates the importance of specialists who have a key role in heritage conservation.”
More information: redmaestros.com