Around 4000 people from all over Europe gathered at the Odeion of Herodes Atticus, at the foot of the Acropolis, to honour the highest achievements in the heritage field and to celebrate a Europe of Culture, on the evening of 16 June. Androulla Vassiliou, European Commissioner for Education, Culture, Multilingualism and Youth, and Plácido Domingo, the world-renowned opera singer and President of Europa Nostra, hosted the European Heritage Awards Ceremony 2013. This memorable event was the closing night of Europa Nostra’s 50th Anniversary Congress in Athens. 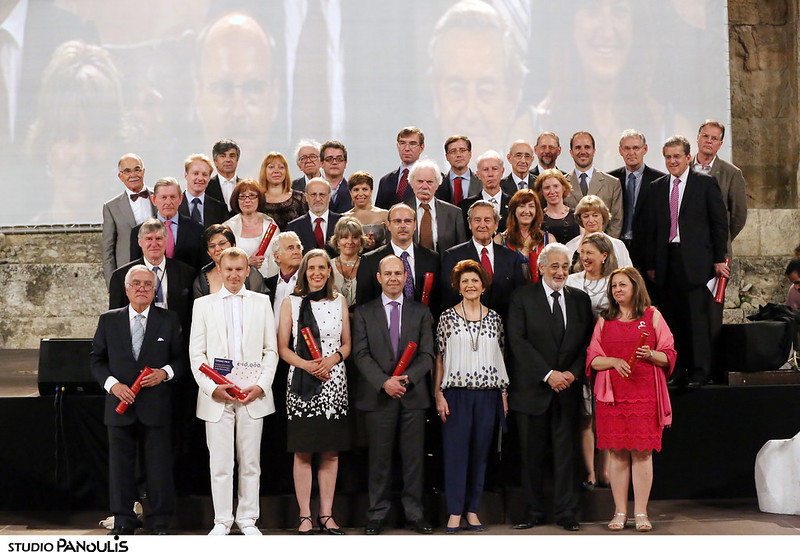 Commissioner Vassiliou and Maestro Domingo paid tribute to the 30 winners of the 2013 European Union Prize for Cultural Heritage / Europa Nostra Awards and made a public announcement of the seven Grand Prix laureates, among which is the Committee for the Preservation of the Acropolis Monuments. It was a double celebration for Greece since the conservation project of the Propylaea Central Building at the Athenian Acropolis received the Public Choice Award.

In his speech, Plácido Domingo conveyed a special message to all the winners: “This is the moment the whole of Europe says ‘thank you’ for your efforts. You have proven, once again, that even in the hardest economic circumstances, cultural heritage projects can inspire talented people and rally support from public and private sources, and can become a success story.” The President of Europa Nostra also called for a New Deal for Culture in Europe: “This is the moment to start a new renaissance for Europe’s cultural heritage, which is a powerful and sustainable way out of difficult times. This is as true for Greece, as it is for any other country in Europe. Our Culture is what makes Europe – Europe”.

In her speech, Androulla Vassiliou highlighted the importance of investing in heritage: “The rich tangible and intangible heritage we share in Europe is a vital part of our identity. It plays a central role in promoting local growth and fosters social inclusion. It builds bridges between the past and the present, the local and the global. During the difficult times we are experiencing in many member states in our Union, I often hear people argue that public spending on culture is a luxury we cannot afford. I would argue the opposite. It is in times of crisis that culture is most needed.”

Costa Carras, a leading figure of Europa Nostra and its country representation in Greece, Elliniki Etairia – the Greek Society for the Environment and Cultural Heritage, also made an inspiring speech, in which he highlighted the legacy of Greece to Europe’s fundamental values and principles. He also reminded us that the beauty of our natural environments together with the breadth and depth of our cultural heritage represent our chief comparative advantages. “May tonight’s recognition by Europe as a whole of a great national accomplishment at the Acropolis help us realise the need to continue on the path of virtue and sustainability in the future. This is the way to regain our self-awareness, self-confidence and self-respect, through academic excellence, dedication to art and effective care for our cities and villages, for the mountains, the seas and the islands of Greece, elements indispensable if we wish to secure a future worthy of our past”, stated Costa Carras.

In recognition of 40 years of his visionary leadership, generous dedication and tireless efforts in promoting Europa Nostra’s mission and in enhancing the organisation’s growth and development, Costa Carras was awarded a Medal of Honour, the highest distinction conferred by Europa Nostra, which he received from Plácido Domingo.

The 15-year-old singer Yiorgos Ioannou from Cyprus, who performed the song Mia Thalassa specially composed for the occasion by Thodoris Economou, and the renowned Greek singer Mario Frangoulis, who sang Imagine by John Lennon, added a very special musical touch to the ceremony.

The prize giving ceremony was followed by an artistic programme entitle ‘The Greek and Nature – from Homer to Elytis’ which was specially prepared for this occasion by Europa Nostra’s country representation in Greece, Elliniki Etairia. This performance highlighted the symbolic and creative interaction between man and nature in Greek culture, a true cornerstone of our European civilisation. Renowned musicians, such as Dionysis Savvopoulos, Maria Farantouri and Alkinoos Ioannides, as well as the actress Lydia Koniordou and the Greek Byzantine Choir, kindly accepted the invitation to perform for the large audience gathered at the Odeion of Herodes Atticus. They took the audience on an epic journey through the rich musical and literary legacies of Greece.

The European Heritage Awards Ceremony 2013 was held under the auspices of Dr. Karolos Papoulias, President of the Hellenic Republic, and was organised with the invaluable cooperation of Elliniki Etairia.

You can watch an extract of a night to remember below.