Home News The 7 Most Endangered 2016: Mission to Helsinki-Malmi Airport undertaken

The 7 Most Endangered 2016: Mission to Helsinki-Malmi Airport undertaken

Helsinki-Malmi Airport in Finland was visited by a delegation of European experts on 2-3 June 2016, less than three months after being listed among ‘The 7 Most Endangered’ heritage sites in Europe in 2016 by Europa Nostra and the European Investment Bank Institute. The heritage experts participated in several working meetings and held a public conference, which gathered media professionals, citizens and City Councillors, at Malmi on the morning of 3 June. The airport is under imminent threat from a new development project. “Given Malmi Airport’s outstanding architecture which is of international significance and the very strong public support for its preservation, the City of Helsinki should implement its residential plan in an alternative area without impairing the function of the airport as it is,” advocated the European delegation. The key findings and recommendations of the expert mission to the site will be presented in the coming months. 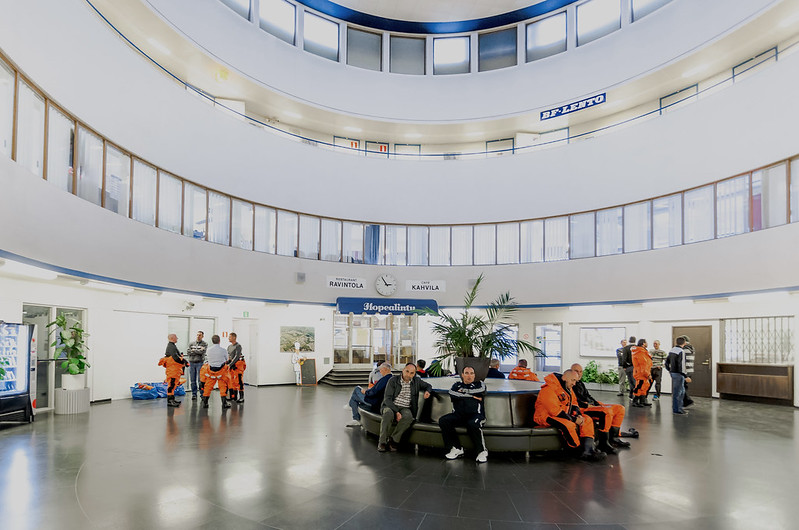 Built in the mid-1930s in the functionalist architectural style, Helsinki-Malmi Airport is one of the best‐preserved still operational pre‐World War II international airports in the world. With about 40,000 landings per year, Malmi is by far the busiest airport in Finland after Helsinki‐Vantaa International. Complete with the original hangar, terminal and runways, the Malmi site, as a whole, has been declared a cultural environment of national significance by Finland’s National Board of Antiquities. However, the City of Helsinki’s General Plan proposes to fill the airport with apartment blocks to be constructed in the early 2020s, while the State of Finland is to withdraw its operations from the airport by the end of 2016.

During the two-day mission, the European delegation – comprised of Sara van Rompaey, Member of the Scientific Council of Europa Nostra, Rienko Wilton, Founding Secretary of the Industrial and Engineering Heritage Committee of Europa Nostra, and Erik Schultz, President of Europa Nostra Norway – and the representatives from the organisations which nominated the site for ‘The 7 Most Endangered’ programme 2016 – namely Europa Nostra Finland, represented by its President Tapani Mustonen, and the Friends of Malmi Airport (FoMA), represented by its Chairman Timo Hyvönen and Benito Casagrande – discussed the main technical, managerial and financial challenges involved in the preservation of Malmi Airport. The expert group also flew over Helsinki to gain a better picture of the site and identify other possible locations for the proposed housing development.

“Malmi Airport is the best-preserved of the three remaining pre-World War II airports in Europe from the pioneering years of the aviation industry, with its original facilities still in place, the other two airports being Lido Airport in Italy and Shoreham in the United Kingdom,” stated the experts.

“The Modernist buildings of Malmi are of outstanding international value, providing not only an excellent example of preserved Modernist aviation architecture, but also exemplifying the extraordinarily progressive period between the two World Wars. In line with the heritage legislation of other European countries, the buildings should be protected in their full context together with the landscape (runways), which means as an operational airport in use,” they added.

“We do not understand why, at a time when air transport is growing rapidly and most capital cities in Europe have several airports and substantial flight congestion, Helsinki is planning to close its only back-up airport. The alternatives for Helsinki Vantaa Airport are the airports in Turku or Tallinn, both two hours away,” the delegates emphasised.

“The City of Helsinki’s new General Plan is based on a level of population growth for the next 35 years not experienced for any length of time in the past. We recognise the need for long-term planning in the housing sector; however, the figures put forward in the General Plan raise questions. We wonder why areas already identified by the City of Helsinki, such as Östersundom, have not been further pursued for residential development,” they noted.