Europa Nostra’s new flagship programme ‘The 7 Most Endangered’, which is being developed in partnership with the European Investment Bank (EIB) Institute, opened the conference on ‘Innovative Financing of Cultural Heritage’ held by the prestigious financial institution in London on 30 May. The conference’s objective was to provide “a forum for discussion of innovative approaches to the challenges of financing heritage investment, particularly in the current European financial environment, where the need to invest to preserve the value of heritage assets for society clashes with constraints on the availability of public funds”. John Sell, Executive Vice-President of Europa Nostra, Jonathan Taylor, Vice-President and Management Committee Member of the EIB, and Francesco Bandarin, UNESCO’s Assistant Director-General for Culture, were among the keynote speakers. 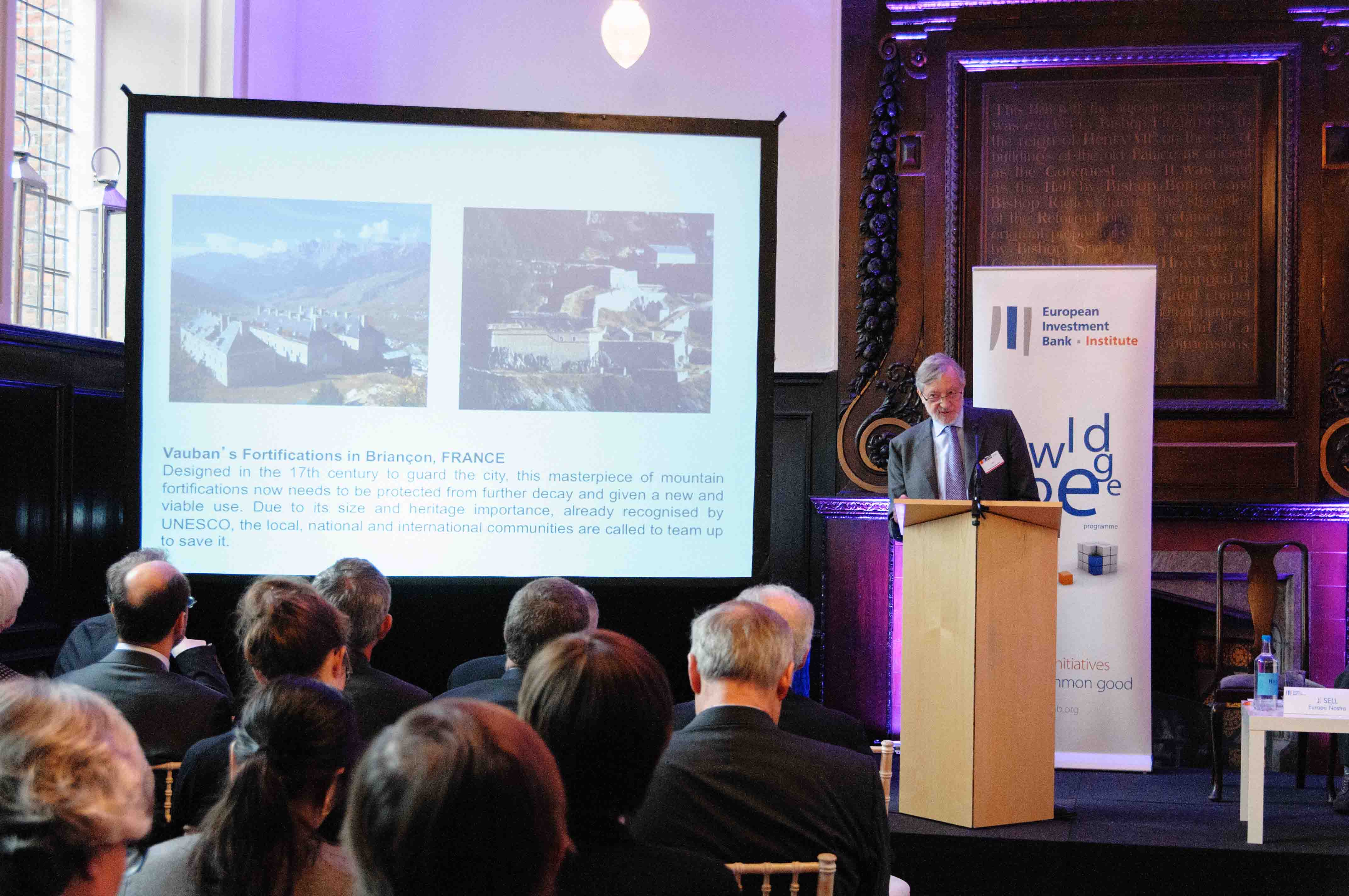 “The management and conservation of heritage goods requires investment and the funding issue needs to be addressed. While the economics of heritage has been often addressed, a less extensively explored aspect concerns the scope to capture financially the benefits associated with investing in heritage and cultural goods and the potential to attract the attention of investors or donors interested in developing self-sustaining revolving instruments to complement grant and sponsorship mechanisms. These opportunities may also encompass tourism, accommodation, multiple uses for the restored facilities and investment in the areas surrounding the sites. They may have an impact on conservation outcomes, and possibly also in terms of revitalising historic town centres, generating employment and improving the environment”, read the statement made by the EIB Institute.

In this context, John Sell introduced the ‘The 7 Most Endangered’ initiative. With this advocacy and operational programme, Europa Nostra and the EIB Institute, its founding partner, aim not only to identify the most threatened monuments and sites in Europe but also to launch a call for action. The two institutions, together with associated partners, will undertake the necessary efforts to assess the selected sites and to contribute to the development of realistic action plans, in close cooperation with national and local public and private entities. More specifically, financial experts will provide analysis and advice on how funding could be obtained, for example, through European Union funds or, in appropriate cases, loans. The 14 European Sites shortlisted for ‘The 7 Most Endangered’ programme were also presented.

The Executive Vice-President of Europa Nostra was followed by Gianni Carbonaro, Head of the Municipal and Regional Unit of the EIB, who spoke about The Case for Innovative Financing, and Francesco Bandarin, UNESCO’s Assistant Director-General for Culture, who gave a lecture on Financing Culture and Heritage: the Emerging Challenges.

The morning session, which was moderated by Wesley Kerr, Chair of the London Committee of the Heritage Lottery Fund, included the presentation of Case Studies and Lessons Learned from Portugal, Spain, England, France and the United States. The afternoon session, which was chaired by Liz Peace, CEO of the British Property Federation, consisted of a panel discussion on Raising Finance: What Scope for Innovation? with heritage experts and investors.

The conference ‘Innovative Financing of Cultural Heritage’ took place at the Fulham Palace in London and brought together policy experts, international institutions, organisations directly engaged in the management of heritage goods, donors and investors. Many invaluable contributions were given during the presentations.