700 people attend debate on the future of Europe and ‘European Inspirations’ concert.

In the evening of 5 December, during a Citizens’ Dialogue at BOZAR in Brussels, Plácido Domingo, President of Europa Nostra, Androulla Vassiliou, European Commissioner for Education, Culture, Multilingualism and Youth, Isabelle Durant, Vice-President of the European Parliament, Michelangelo Pistoletto, the renowned Italian visual artist, and Paul Dujardin, Director of the Palais des Beaux-Arts, debated the future of Europe and the role of culture as a catalyst for European integration. 700 people participated in this Citizens’ Dialogue, organised by the Representation of the European Commission in Belgium and the Chancellery of the Prime Minister in partnership with BOZAR and Europa Nostra, and attended the ‘European Inspirations’ concert. This evening programme coincided with the celebration of the 50th anniversary of Europa Nostra in Brussels. 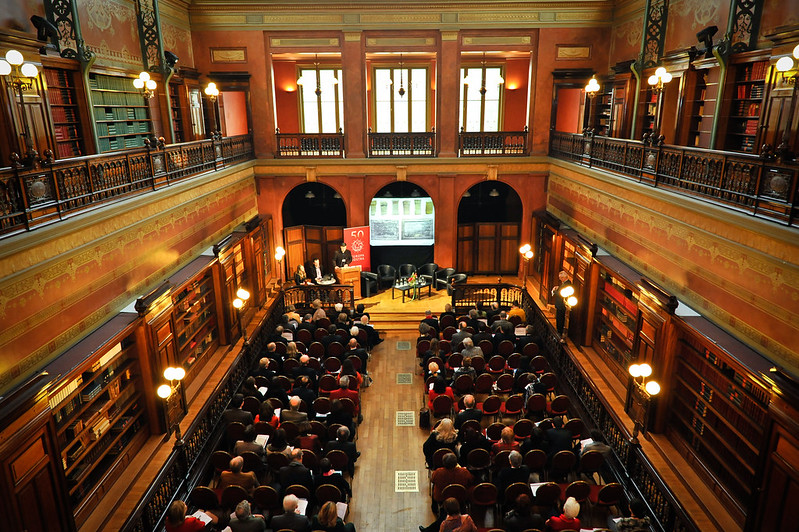 “I am not surprised by these results. The EU is composed of a large number of Member States with millions of citizens. It is therefore difficult to reach each and every citizen. But there are many good reasons to be optimistic about the future of Europe. The European Union has been doing a lot for its citizens. Today, I have had a meeting with President Barroso. He has pointed out to me that nowadays it is very fashionable to be negative about Europe and to complain. This is not a constructive attitude. We must keep a positive perspective,” commented Plácido Domingo.

“What we – the leaders, the elected people from the EU institutions – must do is to no longer be on the defensive. We are so afraid of losing the European project that we sometimes don’t listen to the cultural players and stakeholders. We should speak about emotions and not only about rules and directives. One way of listening to people is to stop being on the defensive,” advocated Isabelle Durant.

“We have to understand that what has been negative until now has to change little by little. That is what culture is about. Something negative can become positive. We have to vote for Europe and we have to continue to work for Europe. Europe is an artistic work that we have to create together and with this artistic work we have to make economic and political changes in order to achieve a real European government,” stressed Michelangelo Pistoletto.

To the question ‘Can we speak of a European culture?’, 67% of the audience answered ‘yes’. In response to another question, 79% voted in favour of a closer political union.

“We have indeed a European culture, a way of life, a way of thinking, our poetry, our music. Let me remind you that very few programmes received increased funding in the new EU budget but the ‘Creative Europe’ programme was one of them. This is indicative of the importance that the Commission attaches to culture. We are devoted to culture; culture is part of our lives and contributes greatly to economic growth and the creation of jobs. Culture has a key role to play in the building of a closer Union”, highlighted Androulla Vassiliou.

“This new initiative launched by President Barroso, a ‘New Narrative for Europe’, is very important. Many intellectuals believe that we are still living in the old times but there is a new reality. We need bottom-up proposals: we need people – academics, economists, Nobel Prize winners, for example – to take responsibility. What is discussed in the European Parliament is extremely complex but culture is a good tool to communicate these issues,” stated Paul Dujardin, member of the Cultural Committee of the ‘New Narrative for Europe’ project.

“We know what the narrative was in the past. We had wars and terrible moments in Europe but these moments progressively led to changes. The latest major problem was the economic crisis. The narrative from the past must become a driving force to think about a ‘New Narrative for Europe’. This new narrative is the commitment that we are making from a cultural perspective in order to change politics,” added Michelangelo Pistoletto, also a member of this Cultural Committee.

“Today, more than ever, Europe needs inspiration. And when I say Europe, I mean European institutions and also European citizens. And where better to find this much-needed inspiration than in our shared culture and cultural heritage: in our monuments and landscapes, in our literature and music, for example. Europa Nostra and I, as its President, are proud to celebrate tonight, together with you all, our 50th anniversary. We seek to be the Voice of Cultural Heritage in Europe and to cooperate fruitfully with EU institutions in order to keep our heritage alive, as a key resource and also as a source of inspiration for Europe,” stated Plácido Domingo, in his introductory speech to the musical programme.