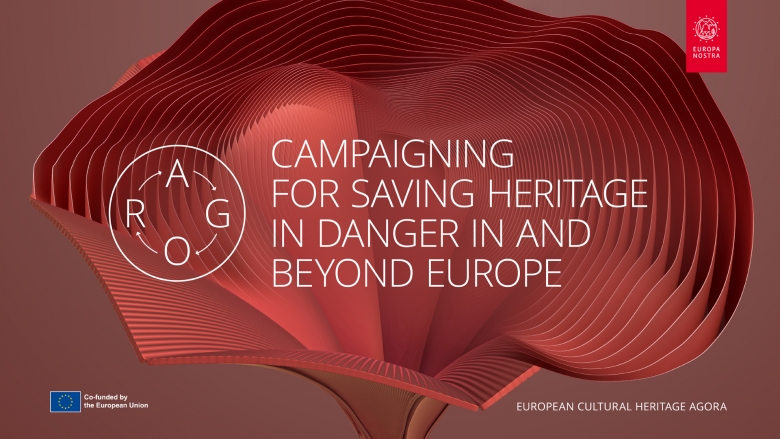 The Work Package 7 of our network project European Cultural Heritage Agora (2022-2024), entitled Campaigning for Saving Heritage in Danger in and beyond Europe, intends deploys campaigns to save endangered heritage in Europe and beyond, whether it is threatened by neglect, lack of funds, unsuitable development, conflicts or due to natural, human-related or climate change causes.

Depending on the case, Europa Nostra shall bring together all stakeholders concerned to find a sustainable future for those sites, provide expertise and/or serve as a bridge with EU institutions. In case of a (post)conflict situation, our organisation shall remain non-partisan and impartial and act in favour of cultural heritage as a bridge builder rather than as a dividing force.

These activities are strongly linked to and support the entire project, notably through networking, capacity building, advocacy, data collection and communication.

Awareness raising via the 7 Most Endangered Programme

This flagship programme, launched in 2013, is run by Europa Nostra in partnership with the European Investment Bank Institute and with the support of the EU Creative Europe programme. The 7 Most Endangered Programme raises awareness, makes independent technical assessments, proposes recommendations for action and seeks to rally support to save the selected endangered sites. It actively involves our network as only member organisations, individual members or members of the European Heritage Alliance can submit nominations.

📢Europa Nostra and @EIBINSTITUTE just announced the 7 most threatened heritage sites in Europe for 2022. 🇪🇺🆘

The #7MostEndangered programme is run by Europa Nostra and @EIBINSTITUTE with the support of @europe_creative!

Other heritage at risk campaigns

Cultural heritage is threatened across Europe and at its immediate borders, especially in the Mediterranean and Middle-East regions, and often due to conflicts. Through this activity, Europa Nostra will deploy and/or support campaigns developed by its network to alert and safeguard meaningful heritage sites in Europe and in the rest of the world which are not covered by the 7 Most Endangered Programme.

A wave of solidarity at today’s webinar for Ukraine! Together with @OurWH50 & @GlobalHeritage, we thank you for your active involvement and eagerness to provide and mobilise support for Ukraine’s endangered heritage. To our collective #civilsociety action! #StandWithUkraine pic.twitter.com/pMvepJlu5U

The expected outcome of this Work Package is stronger awareness raising of cultural heritage as a vector for sustainable development, green transformation and economic prosperity, as well as for trustful and peaceful dialogue between citizens and their communities, and as such as a key pillar of Europe’s external relations.