Home News Armenian church and monastery in Nicosia: this project gives hope to all communities in Cyprus

Armenian church and monastery in Nicosia: this project gives hope to all communities in Cyprus

The exemplary conservation of the Armenian Church and Monastery in Nicosia, winner of a European Union Prize for Cultural Heritage / Europa Nostra Award 2015, was celebrated on its premises on the evening of 27 October 2015. It was a moving and solemn ceremony which brought together the stakeholders keenly committed to preserving the rich cultural heritage of Cyprus. Representatives from the Armenian, Greek Cypriot and Turkish Cypriot communities, high-level officials from the European Commission in the country, Europa Nostra, the United Nations Development Programme – Action for Cooperation & Trust in Cyprus (UNDP-ACT), and the United States Agency for International Development (USAID), as well as ambassadors and heads of diplomatic missions in the country, participated in this memorable event. 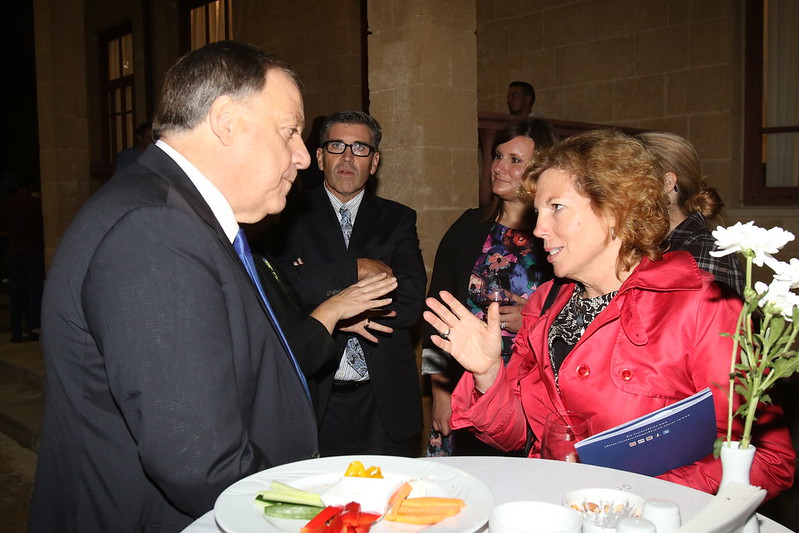 In his opening remarks, Head of the European Commission Representation in Cyprus George Markopouliotis congratulated all those involved in the restoration of the Armenian Church and Monastery in Nicosia. “You have managed to give back to Nicosia a monument that reminds all Cypriots of the diversity that underpins the island’s history, and you have put a cultural landmark back on the map,” he affirmed.

For its part, the Secretary General of Europa Nostra Sneška Quaedvlieg-Mihailović extended the warmest congratulations from the President of the organisation Maestro Plácido Domingo to all project partners: the Italian architect Paolo Vitti and the civil engineer Stefano De Vito; the Armenian Church and the Armenian Community, represented by Vartkes Mahdessian; the contractors; the Turkish and Greek Cypriot experts and relevant authorities; the UNDP-ACT office who was in charge of the coordination between the project partners and various stakeholders; and, finally, the US government who has ensured – through USAID – the funding of this project.

Sneška Quaedvlieg-Mihailović highlighted that this project gives hope to all communities in Cyprus. “Hope that, instead of being an instrument and victim of divisions and confrontations, the extremely rich cultural heritage of Cyprus will from now on serve as a bridge between various cultures, religions and communities.” She emphasised that this message of hope is important for Europe as whole, at a time when the continent is confronted with an unprecedented wave of migrants. “Europe has today an imperative: to invest in projects which promote intercultural and interreligious dialogue. The integration of migrants is not only a political and economic challenge, it is, above all, a cultural and educational mission for all involved.”

Another powerful message was conveyed by Christopher Louise, Project Manager from the United Nations Development Programme – Action for Cooperation & Trust in Cyprus: “Hundreds of years ago this Church was a symbol of the cooperation between the communities of the island. I very much hope that soon the symbolism of this place, which lies on the edge of the Buffer Zone of Nicosia, will be translated into action that reconnects the beating heart of the cultural life of this city.”

Kathleen Ann Doherty, US Ambassador to Cyprus, stated that “the EU Prize for Cultural Heritage / Europa Nostra recognises the work carried out to rehabilitate a unique monument of Cyprus’ cultural heritage” and that “the United States is proud to have funded this project”.

In her address, the Secretary General of Europa Nostra mentioned the visit held the day before to the Buffer Zone of the Historic Centre of Nicosia, listed among ‘The 7 Most Endangered’ heritage sites in Europe in 2013, during which the delegation of representatives from Europa Nostra and the European Investment Bank Institute was informed of plans for the respectful and sustainable regeneration of the entire area by the team of Turkish and Greek Cypriot colleagues. Sneška Quaedvlieg-Mihailović also made reference to the ‘Cultural Heritage Counts for Europe’ event held that morning, during which the key findings and recommendations of this European study produced by Europa Nostra and 5 partners were presented to a wide audience of heritage stakeholders from Cyprus. Finally, she paid special tribute to Androulla Vassiliou, former EU Commissioner for Culture (2010-2014), who was present at the ceremony, “for her inspiring leadership and her tireless commitment to raising the cultural profile of the European Union especially during her mandate as the European Commissioner”.

The Local Award Ceremony for the Armenian Church and Monastery in Nicosia was attended by the Imam of Hala Sultan Tekke Shakir Alemntar, the President of the Chamber Phidias Pilidis, the representatives of the Greek Cypriot and Turkish Cypriot communities of Nicosia, Constantinos Yiorkadjis and Mehmet Charmantzi, and also the former Mayor of Nicosia Lellos Demetriades, among many other important figures from the political, business and cultural worlds.