An exciting evening programme in Marathon took place on 18 June in the framework of the Council/Board meetings of Europa Nostra and the Capacity Building Days organised in cooperation with Erfgoed Brabant, Erfgoed Gelderland and Europa Nostra’s country representation in Greece Elliniki Etairia, with the support of the EU Creative Europe programme. Some 60 Young Heritage Professionals from all over Europe, together with members of Europa Nostra and Elliniki Etairia celebrated the 2019 European Heritage Award / Europa Nostra Award winner ‘Greek Paths of Culture”, listened to famous actor Iannis Simonides reading from Herodotos’ account of the battle of Marathon, before walking the historical path leading to Schinias beach in time for a traditional dinner and music by the sea.

658 km of restored hiking and bicycle routes, many of them dating from ancient and medieval times, in no less than 11 regions across Greece – this is the vast geographical scope of the project ‘Greek Paths of Culture’ initiated by Elliniki Etairia – The Society for the Environment and Cultural Heritage based in Athens, Greece, and supported especially by the A.G. Leventis Foundation, the Stavros Niarchos Foundation and Elliniki Etairia’s Board member Phokion Potamianos & family. The European Commission and Europa Nostra rewarded their outstanding efforts in making public footpaths and Greece’s cultural and natural heritage accessible (again) with a European Heritage Awards / Europa Nostra Awards 2019 and this achievement was celebrated at a special Local Awards Ceremony at the Tumulus of the Athenians in Marathon, Greece, on 18 June.

What an exciting programme in Marathon for #CapacityBuildingDays! We celebrated #EuropeanHeritageAwards winner ‘Greek Paths of Culture’ & walked this historical route altogether to the beach for dinner, traditional music & swimming 🥾🎶🌊🌅 #Heritage4Europe #TheFutureIsHeritage pic.twitter.com/CHf0fuvIG9

Europa Nostra’s Executive President Hermann Parzinger, and Secretary General Sneška Quaedvlieg-Mihailović applauded Elliniki Etairia and particularly its President Lydia Karras who not only had the initial idea for the programme but who had realised it with her energy, passion and commitment. In his speech, Hermann Parzinger underlined the importance of the ‘Greek Paths of Culture” programme both in the field of sustainable development and in the area of raising awareness of the value and protection of historic and environmentally valuable landscapes: “Heritage is materialised history and it is important to care for it. ‘The Greek Paths of Culture’ are an excellent example of the integration of cultural heritage and natural landscape (protection), not only for Greece but for Europe as a whole. Many countries can learn from this project.” And alluding to the historic battlefield on which he was handing over the European Heritage Award / Europa Nostra Award to the President of Elliniki Etairia, he added: “Today our hero is Lydia Karras and not the warriors of Marathon!” 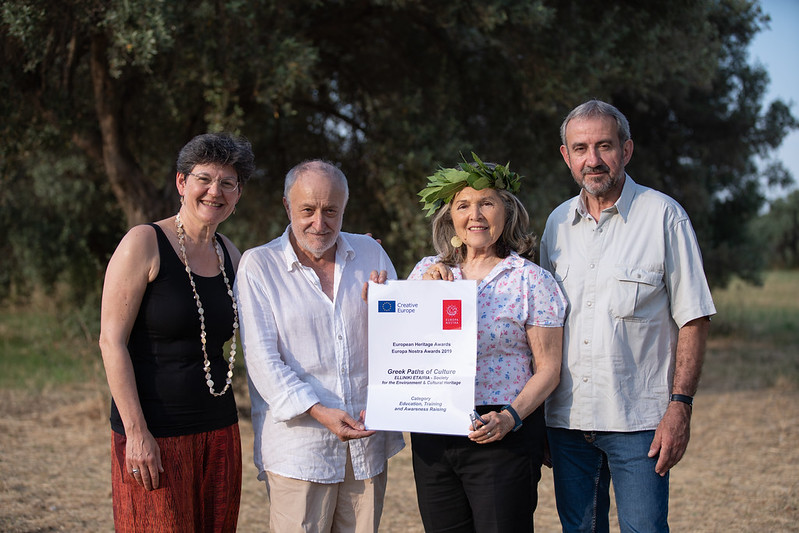 Grateful for the recognition of the work of everyone involved in the project, Lydia Karras thanked Europa Nostra and the European Commission in a moving speech on behalf of all those who made the ‘Greek Paths of Culture’ possible: “What a more symbolic award could there be for this project than a European award?”. Emphasizing the collective nature of the project and the many local communities involved, she noted: “It is a great satisfaction to receive an award that combines protection of heritage and nature, while achieving sustainable development. For every euro invested, the profit is multiple for the local communities. A copy of the prize will be sent to the municipalities and volunteer groups that are an integral part of the programme: this European Heritage Award/ Europa Nostra Award belongs to them as well.”

Special both in terms of the location and of the programme, the ceremony was set in the imposing and austere archaeological site of the Tomb of Marathon, an emblematic historical landscape of Greece shaped by the famous Battle of Marathon (exceptionally opened on Tuesday with the courtesy concession of the Hellenic Ministry of Culture and Sports and the Municipality of Marathon). In this plain, the battle between the Athenians and the Persians took place in 490 BC, a major event from which Marathon owes its world reputation and its excellent position in the consciousness of the ancient Greeks. The tomb was formed above the graves of 192 Athenian men, who had lost their lives in the battle, defending the democratic system of government, that is so valuable until the present day not only to Europe but to the world as well.

Another highlight of the ceremony was the reading from Herodotus’ account of the battle of Marathon by the famous Greek actor Iannis Simonides, who made the audience travel back in time to the battle scene.

After standing ovations for both the laureate and the actor, it was time to”Walk for the Heritage of Europe” on one of the Paths of Culture with some 150 participants from all over Europe going from the historic battlefield through a pine forest leading to the Schinias beach. This beautiful coastal landscape was at the centre of a recent campaign led by Elliniki Etairia to protect its natural heritage, resulting in the removal of the illegal taverns and other constructions. What better way to celebrate this achievement together than with traditional Greek live music, refreshments and a picnic by the sea?