The National Historical and Cultural Museum-Reserve ‘Niasvizh’, winner of a 2016 Europa Nostra Award in the category Dedicated Service, hosted a ceremony to celebrate this remarkable achievement on 14 October. Europa Nostra’s Vice-President Prince Alexander zu Sayn-Wittgenstein presented the Award to the Director of the Museum Sergei Klimov. The Deputy Minister of Culture of the Republic of Belarus Vasili Chernik also addressed the audience. The event was attended by representatives from scientific and public organisations working in the culture field, local and national officials, Maecenas, and artists. As part of the event, a new exhibition entitled ‘The Heritage of Saint Euphrosyne of Polotsk’ was opened.

The Awards’ jury was “impressed by the momentous work which was carried out by the National Historical and Cultural Museum-Reserve in Niasvizh in implementing a museum in the newly renovated Radziwill palace in just six short months. The renovations and the task of installing a whole museum was not an easy undertaking because of the relative remoteness of the location as well as the damage and neglect that the building had suffered for decades. The museum’s ability to maintain public interest and outstanding visitor numbers of approximately 400,000 annually are also praiseworthy for this same reason”. The installation of the museum was a huge project and spanned over 30 exhibition halls with 20,000 exhibits. 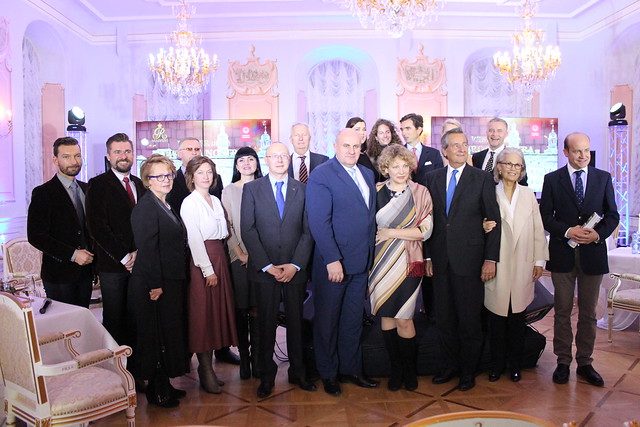 Europa Nostra’s Vice-President Prince Alexander zu Sayn-Wittgenstein stated: “Just by walking through the palace compound today, it is wholly apparent how well-deserved this Europa Nostra Award is. Not only has the meticulous work of the conservators revitalised the spirit of this house – with all its exquisite embellishments – but also allows us a rare glimpse back through the past. Let me stress that all Europeans are as proud as you can be about what has been done here, the restoration of an exceptional piece of our common cultural heritage. And this is only part of the outstanding work that has been carried out in Belarus in recent years to safeguard and restore your treasures – treasures that are a very essential part of our European culture and identity”.

The Deputy Minister of Culture of the Republic of Belarus Vasili Chernik recognised the outstanding service of all those who worked on the restoration of Museum-Reserve ‘Niasvizh’, be it museum workers, conservationists or scientists. He took the opportunity to present an honorary diploma from the Ministry of Culture to the Deputy Director of the Museum, Natalia Zherko, for her many years of service in the field of culture.
Sergei Klimov, Director of Museum-Reserve ‘Niasvizh’, and Prince Matei Radziwiłł, also spoke during the event held at the Theatre Hall of the Niasvish Palace.
The ceremony was enhanced by performances by Belarusian theatre and cinema artists, musicians, and dancers. During their performance the names were announced of those who made the greatest contribution to the restoration of the Museum-Reserve ‘Niasvizh’.

The exhibition ‘The Heritage of Saint Euphrosyne of Polotsk’, funded by Polotsk National Historical and Cultural Museum-Reserve, presents the unique exfoliated paintings from the 12th century Saviour Transfiguration church in Polotsk. The wall paintings of the church consist of three layers of paintings superimposed on one another – with the layers dating back to the 12th century, 1835 and 1885. In order to uncover the earliest paintings without causing damage to the paintings of the later period, a number of conservationists worked on this project for years. The exfoliated frescos were then transferred to special tablets so that they could be exhibited in stationary and mobile expositions. The technology used was unique not only for Belarus, but for the entire region. In addition, the exhibited objects – 12th century body crosses and encolpia crosses, sculptures, books, and icons – illustrate the heritage of saint Euphrosyne of Polotsk, honoured by all the Christian denominations.