The Hague / Berlin, 20 June 2018 – Bettany Hughes, historian, author and broadcaster from the United Kingdom, is the winner of the Helena Vaz da Silva European Award for Raising Public Awareness on Cultural Heritage 2018. The Award pays tribute to Hughes’ unique contribution to communicating Europe’s history and cultural heritage over the last 30 years. Throughout her distinguished career, she has written and presented over 50 TV and radio documentaries – for the BBC, Channel 4 and Discovery, among others – which have been seen by over 250 million people worldwide. The announcement of the Award was made today by Europa Nostra, the leading European heritage network, on the occasion of the participation of Bettany Hughes in the first ever European Cultural Heritage Summit in Berlin. 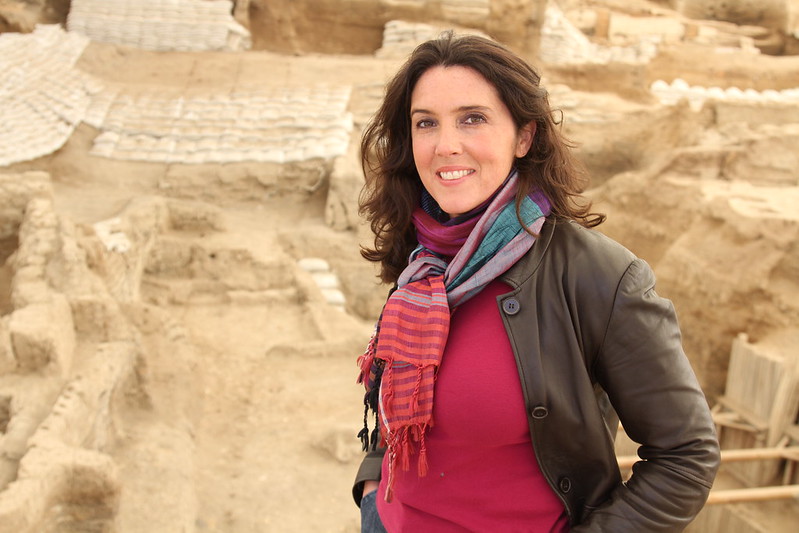 Reacting to the news, Bettany Hughes stated: “I am indeed entirely thrilled by the decision of the jury of the European Award for Raising Public Awareness on Cultural Heritage, which is named after the late Portuguese cultural activist Helena Vaz da Silva. This is a most wonderful surprise and I am truly honoured both by the choice and by the association with Helena Vaz da Silva. This inspires me to re-double my efforts to strive to support, celebrate and save Europe’s heritage”.

The British historian, author and broadcaster is the keynote speaker of the Creative Session ‘Communicating Heritage in the 21st Century’, which will take place this afternoon in Berlin, in the framework of the European Cultural Heritage Summit. During the Creative Session, co-hosted by Europa Nostra and Bertelsmann, journalists, experts and artists from several European countries will discuss ways of engaging citizens for cultural heritage through imaginative and innovative ways of communication.

The Helena Vaz da Silva European Award was established in 2013 by Europa Nostra and its representation in Portugal, Centro Nacional de Cultura, in cooperation with the Clube Português de Imprensa.

Bettany Hughes will receive the Helena Vaz da Silva European Award for Raising Public Awareness on Cultural Heritage 2018 at an official ceremony on 15 November at the Calouste Gulbenkian Foundation in Lisbon.

“Bettany Hughes, particularly through her television appearances, but also through radio broadcasts and publications, has done much to bring history to life and introduce a wide public to the founding stories of Europe’s heritage. Her energy and enthusiasm is evident in all of her work and it is that enthusiasm that makes her scholarship accessible to a non-academic audience. Because her knowledge is rooted in antiquity, Bettany Hughes has an ability to see and compare such matters as religious belief and gender roles in a very broad context. Her delight in and belief in the importance of the classical and pre-classical worlds for an understanding of the development of European history have led her to campaign to promote the teaching of Greek and Latin in schools,” noted the Jury of the Helena Vaz da Silva European Award.

Maria Calado, President of the Centro Nacional de Cultura, emphasised: “Bettany Hughes retells stories from the past which transcend millennia and thus creates meaning for us today. In our society, nationalism and populism seem too easily to be growing in influence, making it vital to build insight into our multi-layered and multifaceted identity, and to open doors into the rich sources of knowledge and inspiration we have inherited.”

Professor Bettany Hughes is an award-winning historian, author and broadcaster, who has devoted three decades to vibrantly communicating the past. Her speciality is ancient and medieval history and culture. A Scholar at Oxford University she has taught at Oxford and Cambridge Universities and lectured at Cornell, Bristol, UCL, Maastricht, Utrecht and Manchester. She is a Tutor for Cambridge University’s Institute of Continuing Education and a Research Fellow of King’s College London.

Her first book Helen of Troy: Goddess, Princess, Whore (2005) has been translated into ten languages. Her second, The Hemlock Cup: Socrates, Athens and the Search for the Good Life (2010), was a New York Times bestseller and was shortlisted for the Writer’s Guild Award. She has written and presented over 50 TV and radio documentaries on both ancient and modern cultural heritage subjects for the BBC, Channel 4, Discovery, PBS, The History Channel, National Geographic, Discovery, BBC World and ITV.

In her latest podcast series Europe and Us, Bettany Hughes travels around some of the most splendid heritage sites in England to investigate their deep-rooted connections to Europe and the wider world. Guided by experts from the National Trust, she travels through time, from prehistory to the 20th century, to unravel Europe’s influence on 10 inspiring heritage sites. The podcasts made it to the top ten in the iTunes charts.

Hughes’ latest book, Istanbul: A Tale of Three Cities, was shortlisted for the Runciman Prize and is a Sunday Times bestseller. She is currently writing a book on the truth of the Seven Wonders of the World. Her latest film on The Scythians, produced by SandStone Global in association with BBC World News, will go out on BBC World on 7/8/9/10 July. With SandStone Global she is now working on a film about the god Mars, and the worship of war through the centuries.