The EU Prize for Cultural Heritage / Europa Nostra Awards were officially presented to four exceptional Italian winners – the rehabilitation of the Diocletian Baths, the research project ‘Granaries of Memory’, Mrs Giulia Maria Crespi, who has devoted her life to the vigorous defence of Italy’s cultural heritage, and the education programme ‘Apprendisti Ciceroni’ – during a high-profile event held  on 14 November 2016 at the National Roman Museum of the Diocletian Baths in Rome. 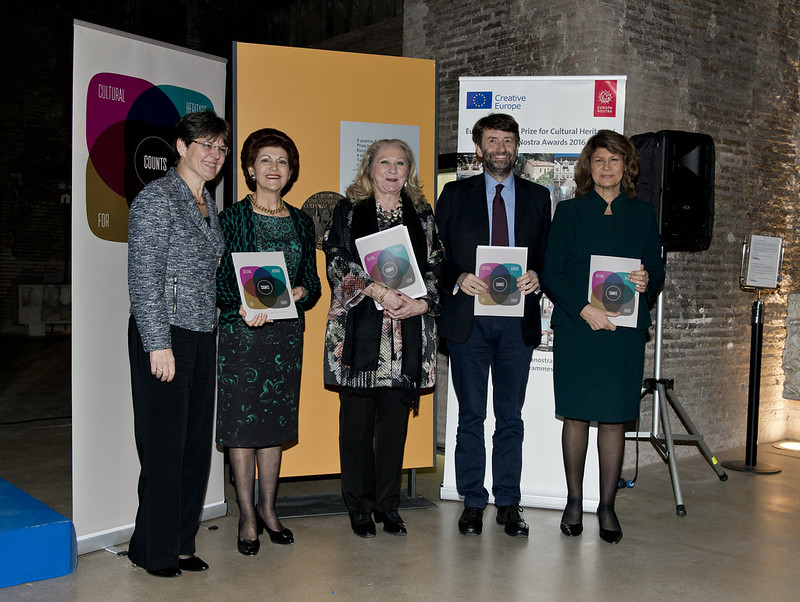 In front of 170 guests, Dario Franceschini, Italian Minister of Cultural Heritage, Silvia Costa, Chair of the Committee on Culture and Education of the European Parliament, and Androulla Vassiliou, Vice-President of Europa Nostra and former European Commissioner for Culture, praised these remarkable laureates from Italy.

Marco Magnifico, Executive Vice-President of FAI – Fondo Ambiente Italiano, read a message on behalf of Giulia Maria Crespi, winner of the Grand Prix in category Dedicated Service. “In this world currently troubled by dangerous trends and totalitarian yet aggressive forces as well as by widespread globalization, our little continent Europe might be important in the future. It will emerge especially if able to offer the future generations its intrinsic values, which have been embedded in its ground since ancient times. Namely, incomparable fine arts, diverse landscapes, handicrafts and food, and spiritual values of fraternity and mutual democratic cooperation,” he stated.

Rosanna Friggeri, Director of the National Roman Museum, and Marina Magnani Cianetti, Architect, spoke about the rehabilitation of the Diocletian Baths. Piercarlo Grimaldi, Dean of the University of Gastronomic Sciences in Pollenzo, presented the research project ‘Granaries of Memory’, while Annamaria Ansaloni, Delegation of FAI in Rome, delivered the results of the education programme ‘Apprendisti Ciceroni’.

The event also included the presentation of the Italian Edition of the ‘Cultural Heritage Counts for Europe’ Executive Summary, produced by Europa Nostra with the support of the Ministry of Cultural Heritage, Cultural Activities and Tourism (MiBACT). The presentation was made by Rossana Bettinelli, Board member of Europa Nostra. All speakers stressed the positive impact of heritage on Europe’s economy, culture, society and environment.

“Now we need the concrete comparison of the participatory governance models and public/private co-financing models; we asked for the establishment of a portal dedicated to EU funding and instruments, and for the development of qualitative and quantitative indicators. There is a need for a stronger focus on results in terms of enhancement of the territories, new skills, innovation and social inclusion. The European Cultural Heritage Year in 2018 will also serve to this scope,” advocated Silvia Costa, Chair of the Committee on Culture and Education of the European Parliament.

“We live in difficult times in Europe and the populist xenophobic and Eurosceptic forces are trying to destroy our European Project. We have to fight these forces by concentrating on those wonderful elements that can unite all Europeans. And I believe we all agree that European cultural diversity and European Cultural Heritage can indeed serve as a uniting force,” noted Androulla Vassiliou, Vice-President of Europa Nostra.