Home News Celebration to mark success of The Secret Life of a Palace project in Gödöllő, Hungary

The success of The Secret Life of a Palace project in the European Heritage Awards / Europa Nostra Awards 2020 was celebrated on 6 September at the Royal Palace of Gödöllő, Hungary. The programme featured an award ceremony, the opening of a new permanent exhibition and a theatrical performance. Due to the safety precautions against COVID-19, the celebratory event was held for a restricted group of 50 participants, but was followed live on the local television channel (watch video of the ceremony). 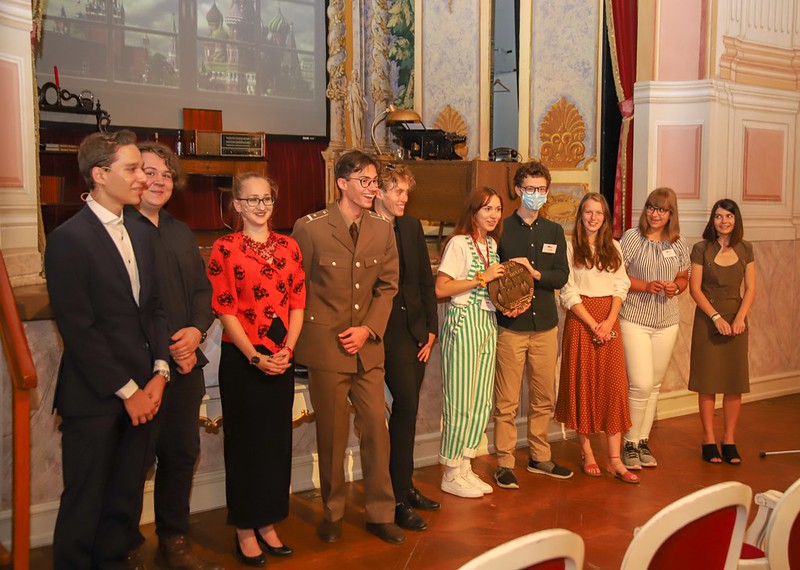 The Secret Life of a Palace project raised awareness of the lesser known history of the Royal Palace in the town of Gödöllő. From the 1950s until the fall of the Hungarian socialist government in 1990, the Palace was divided in two: one part was assigned to the Metropolitan Nursing Home, while the barracks of the Soviet army was set up in the other part, with a number of apartments also assigned to some army officers and their families. This ambitious educational and awareness-raising project closely involved a group of young students aged 12 to 18-years-old. They contributed to the development of a concept, to the researching of the history of the Palace and to the design, building and marketing of exhibitions, under the supervision of expert museologists.

The artefacts and oral stories collected as a result of the 2018-2019 youth project are now presented in a new location, according to a new concept, complemented with an explanation of the stages and results of the renovation of the Palace after the change of regime.

In a video message specially recorded for the event, Graham Bell, Board Member of Europa Nostra, stated:

“There was a wall in the Royal Palace of Gödöllő from 1950 to 1990. It was a dividing wall between two functions, two very different groups of people. Future historians could have assumed there was no contact, nothing in common between the elderly residents and the Russian officers. But you, students and professionals working together, have discovered that the wall did not divide; that being in the Palace brought people together, and what you discovered means their stories live on. All of that could have been lost during this generation if you had not shown interest and captured the moment in the lives of those who were there.

We have given this Award in recognition of how you have revealed the humanity behind the facts. The Award is an inspiration to others around Europe, especially students, to do the same: ‘listen while the storytellers can still tell their story’”.

Graham Bell paid tribute to all those involved in the project, Dr. Tamás Ujváry, Managing Director of the Royal Palace of Gödöllő, and especially the students who have given this story new life, namely Ábris, Hanna, Csenge, Vince, Balázs, Máté, Fruzsi, Soma, Gáspár, Kinga, Anna, Marcell, Sophie, Vilmos and Levente.

Dr. Tamás Ujváry, Managing Director of the Royal Palace of Gödöllő, affirmed: “I think we were able to tell human stories, to release feelings across generations that are difficult to put into words.”

During the celebratory event, the students performed their own play reminiscent of the era and conducted guided tours of the new permanent exhibition The Secret Life of the Palace (1950-1990). The exhibition can be seen free-of-charge on the ground floor of the Royal Palace of Gödöllő.