More than 150 people, mostly professionals from the heritage and culture sectors, participated in the local award ceremony for the VERONA (Van Eyck Research in OpeN Access) project by the Royal Institute for Cultural Heritage (KIK-IRPA), winner of the European Heritage Awards / Europa Nostra Awards 2019. The festive event took place on 14 January at BOZAR – Centre for Fine Arts in Brussels. On this occasion, photos and scientific images of several of Jan Van Eyck’s top works, plus miniatures from the manuscript Turin-Milan Hours, were added to the website Closer to Van Eyck. The painted oeuvre of Jan Van Eyck can now be admired online down to the very last detail. During the ceremony, it was announced that the VERONA images will be shown in the exhibition Facing Van Eyck. The Miracle of the Detail, which will run at BOZAR from 24 September to 10 January. 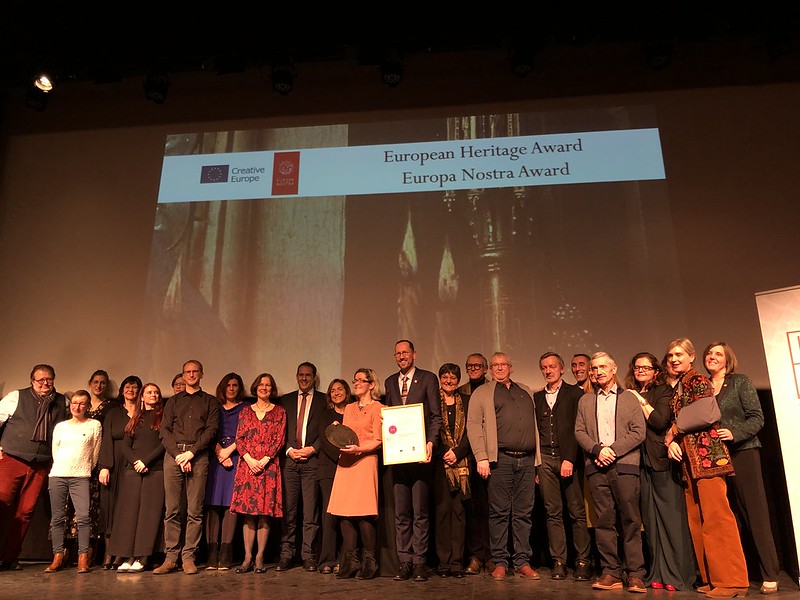 Sneška Quaedvlieg-Mihailović, Secretary General of Europa Nostra, and Paul Dujardin, President of Europa Nostra Belgium, unveiled the Awards plaque. Themis Christophidou, Director-General of the DG for Education, Youth, Sport and Culture of the European Commission, assisted by David Clarinval, Deputy Prime Minister and Minister of Budget, Civil Service, National Lottery and Science Policy, handed over the plaque to Hilde De Clercq, Acting Director General of the KIK-IRPA, who shared the stage with the entire VERONA team. This once more confirmed the large scale of this interdisciplinary endeavor, which moreover received the collaboration of museums throughout the world. 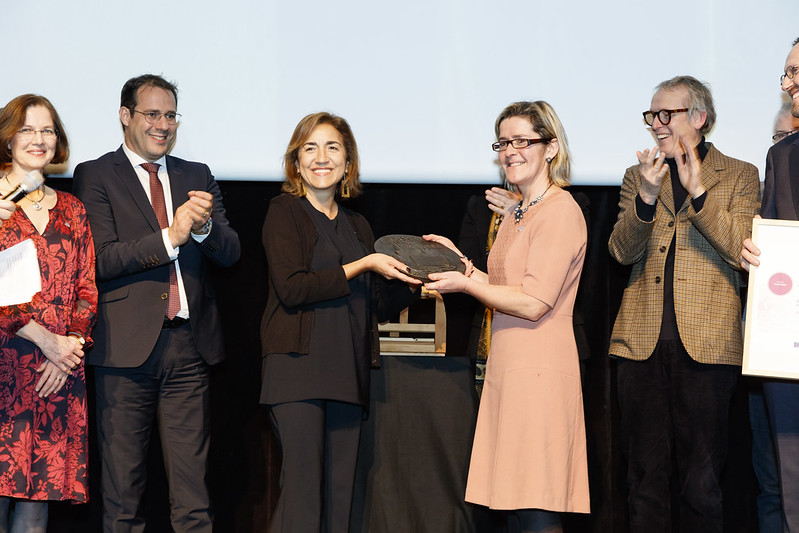 The Secretary General of Europa Nostra praised the VERONA project for its European dimension and for its merits for research, benefits for the broad public and political significance. She also explained the political dimension of the Awards: “The Award-winning projects are regularly used to convince decision-makers and thus improve heritage policies and funding. Just as they are also used for new heritage research that benefits not only the winners themselves but also the sector as a whole.”

Hilde De Clercq elaborated upon her corporate vision and the importance of open data therein: “What we strive for is to evolve further into an open, dynamic and competent crossroads institution for heritage care in Belgium and expand our role as a window on Europe. That our VERONA project received this prestigious Award is a confirmation that we are moving in the right direction. I can proudly state that this project is a model for the possibilities of open data as well as a reflection of the KIK-IRPA’s efforts to make its documentation widely accessible. It is also an encouragement to continue, with increased commitment, on that open access path.”

During the event, the HESCIDA (Heritage Science Data Archive) project was presented to the audience. HESCIDA serves as a pilot for the creation of interconnected digital repositories for heritage science data and the KIK-IRPA plays a pioneering role in this European project, another great example of open data policy.

Paul Dujardin, President of Europa Nostra Belgium and CEO and Artistic Director of BOZAR, congratulated the VERONA team members for their achievement. He moreover announced the forthcoming BOZAR exhibition Facing Van Eyck: The Miracle of the Detail which will feature the VERONA images. “In Facing Van Eyck you can literally dive into Jan Van Eyck’s paintings. Thanks to amazing digital techniques and new scientific research at the Royal Institute for Cultural Heritage (KIK-IRPA), all the secrets of his work are revealed, pixel by pixel,” he stated.