In the aftermath of the tragic Paris attacks and in the midst of a heightened security alert in Brussels, Europa Nostra Secretary General, Sneska Quaedvlieg-Mihailovic, attended the third edition of the Brussels Days of L’Obs dedicated to “Europe: last chance” at which European Commission President Jean-Claude Juncker engaged in an open and direct citizens’ dialogue with an audience of cc. 1000 people gathered at BOZAR. 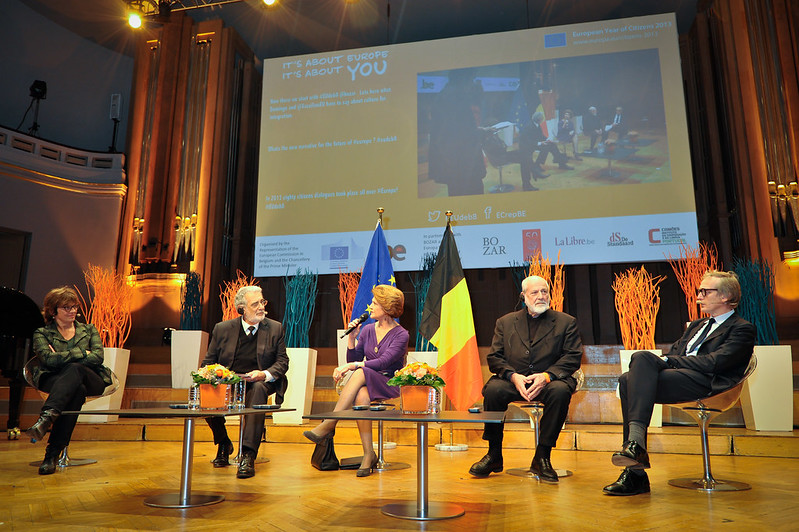 The journalists’ led discussion revolved inevitably overwhelmingly on security issues, especially on the specific role of the European Union, and the European Commission in responding to and preventing terrorist attacks, and more generally in tackling various forms of radicalisation, both inside and outside Europe. During the question time reserved for the audience, Sneska Quaedvlieg-Mihailovic urged President Juncker to make better use of culture and education as key resources for Europe. “We fully respect the ten priorities identified by the European Commission but we believe that culture and education can and ought to contribute to the better implementation of all those priorities”, stated the Secretary General of Europa Nostra. President Juncker acknowledged the significance of culture and education for Europe and stressed the important role of the European Commissioner for Education, Culture, Youth and Sport, Tibor Navracsics, who forms part of the EC team. He also stated that a global response to terrorism and radicalism of all sorts indeed also requires the necessary attention for and investment in culture and education as a means to promote Europe’s shared values which are today under threat.

The new series of Citizens’ Dialogues started in January 2015. This year, 49 Dialogues have taken place in 26 Member States around issues related to the ten policy priorities of the European Commission. The Brussels Days were organised by the French weekly L’ Obs took at BOZAR, in partnership with Belgian daily newspapers Le Soir and De Standaard and with the support of the European Commission’s Representation in Belgium. It is the 50th Dialogue but the first one with President Juncker himself.

Reminder:
The ten priorities of the Juncker Commission are:
1. A New Boost for Jobs, Growth and Investment
2. A Connected Digital Single Market
3. A Resilient Energy Union with a Forward-Looking Climate Change Policy
4. A Deeper and Fairer Internal Market with a Strengthened Industrial Base
5. A Deeper and Fairer Economic and Monetary Union
6. A Reasonable and Balanced Free Trade Agreement with the U.S.
7. An Area of Justice and Fundamental Rights Based on Mutual Trust
8. Towards a New Policy on Migration
9. A Stronger Global Actor
10. A Union of Democratic Change