Finding a viable future for the 19th century Patarei Sea Fortress in Tallinn, considered a unique ensemble of classical defence architecture and a powerful symbol of national resistance to both the communist and Nazi regimes, was the focus of an international conference held at Patarei’s Boilerhouse on 25 August 2015. Academics, heritage and museum experts, and representatives of public and private bodies participated in the full-day event, which gathered around 200 people. Europa Nostra was represented by its Vice-President Piet Jaspaert. Patarei Sea Fortress has been nominated for ‘The 7 Most Endangered’ programme 2016 by the Estonian Heritage Society. 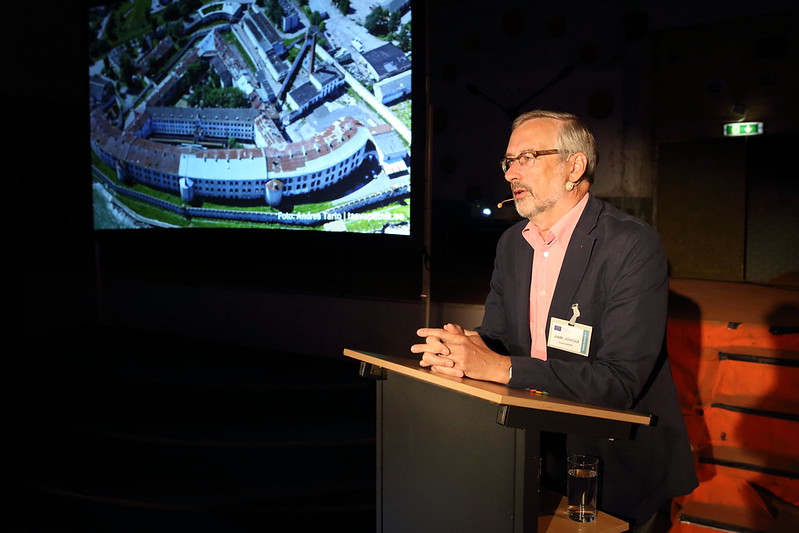 Patarei Sea Fortress is a collection of historic buildings on the coast of Tallinn. Its construction was started in 1829 by order of the Russian Czar Nicholas I and it was completed in 1840. During the Crimean War from 1853-1856, the fortress was partly rebuilt. Since then, it has performed many functions, reflecting the dramatic and manifold history of Estonia. Between 1920 and 2002, the complex was converted into a prison, serving the different political regimes. Patarei Sea Fortress is the largest and most impressive classical style defence ensemble in Estonia, being significant for the entire Baltic Sea. Currently the buildings stand neglected and face an increasing danger of destruction.

The conference entitled ‘Patarei Comes to Life!‘ was opened by Ambassador Jaak Jõerüüt and Piet Jaspaert.

“It is more than a lucky coincidence that all of you are assembled here today to brainstorm the future of Patarei, rightly considered as being endangered, but at the same time a potential Estonian cultural heritage flagship project, following the neighbouring Tallinn Seaplane Harbour, which received an EU Prize for Cultural Heritage / Europa Nostra Award in 2013,” stated Europa Nostra’s Vice-President.

“Yesterday I had the opportunity to take part in a guided tour of Patarei. Alongside tens of young adult Estonians, I walked through its endless corridors, imagining what kind of life was possible behind its walls and doors, listening to the voices of the past crying for justice, human dignity, liberty and freedom of speech, exploring and discovering a unique testimony of Estonia’s vitality, history and identity,” he added.

The morning session of the conference featured presentations on various issues by Professor David Vseviov, from the Estonian Academy of Arts, Merilin Piipuu, Managing Director of the Occupations Museum, and Hellar Lill, Director of the Estonian War Museum. In the afternoon, the floor was given to Professor Roode Liias, from Tallinn Technical University, Jaak Saarniit, Chairman of the Management Board of Riigi Kinnisvara AS, Triin Talk, Inspector-General of the Architectural Monuments of the National Heritage Board, Heikki Lahdenmäki, Restoration Director of Suomenlinna Sea Fortress, and Liis Vahter, from Tallinn CityLab.

Trivimi Velliste, Honorary Chairman of the Estonian Heritage Society, advocated that there were several possible future uses for the historic buildings, which spread over 17,000 square metres; for example, a museum complex, a recreation and culture centre, a hotel, or offices and apartments. He stressed that an effective partnership between the public and private sectors was needed to restore the historic site to life.

Hellar Lill proposed that “in addition to the War Museum, Patarei could also house the Occupations Museum, the Internal Security Museum, the Museum of Communist Crimes and the Prison Museum – all of crucial importance to the history of Estonia”.

For his part, Jaak Saarniit, Chairman of the Management Board of Riigi Kinnisvara AS, affirmed that “five investment groups in Estonia and Scandinavia have recently expressed an interest in developing the Patarei complex”.

The nomination of Patarei Sea Fortress for ‘The 7 Most Endangered’ programme 2016 was submitted in July 2015 by the Estonian Heritage Society, a Member Organisation of Europa Nostra. An international advisory panel, comprising specialists in history, archaeology, architecture, conservation and finance, will meet in November 2015 to discuss the applications made by civil society organisations and public bodies from all over Europe and shortlist the most endangered heritage landmarks.