In the frame of the French Presidency of the Council of the European Union, the conference “Heritage and Architecture: What are the risks and responses in Europe?” took place on 24-25 March at the Institut National du Patrimoine in Paris, with the participation of the French Minister of Culture, Roselyne Bachelot, and the Ukrainian Ambassador to France, Vadym Omelchenko. The conference gathered experts, specialists and representatives of European Institutions, international organisations and civil society organisations. It provided an opportunity for debate and best practice sharing at European level in order to enhance knowledge, anticipation and response against the many risks facing Europe’s shared heritage. The Secretary General of Europa Nostra, Sneška Quaedvlieg-Mihailović, moderated the roundtable discussion “Our common heritage as a vector of peace, cohesion and attractiveness of territories”. 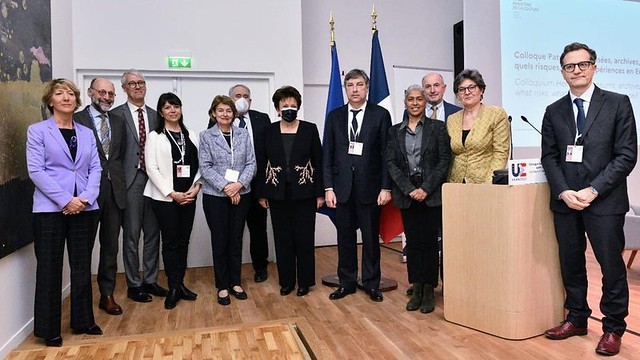 In a special address, the Ukrainian Ambassador to France, Vadym Omelchenko, condemned the destruction of many cultural, heritage and education sites in Ukraine by the Russian armed forces and called on Russia to stop this intentional destruction. “Protecting our culture might not seem like an immediate priority in this context of humanitarian emergency, but Russia is destroying our memory, our soul”, he said.

In response, the French Minister of Culture and Acting Chair of the EU Council of Ministers, Roselyne Bachelot, reiterated her full solidarity and admiration for the courage of citizens in Ukraine, and especially the culture and heritage defenders who are protecting their identity, which is also profoundly European. “The tragic events in Ukraine remind us of the fragility of our common heritage, at the mercy of the murderous madness of humans. The destruction of the enemy’s heritage can be part of war goals since it can reach people in their hearts“, said Minister Roselyne Bachelot.

Roundtable “Our common heritage as a vector of peace, cohesion and attractiveness of territories” 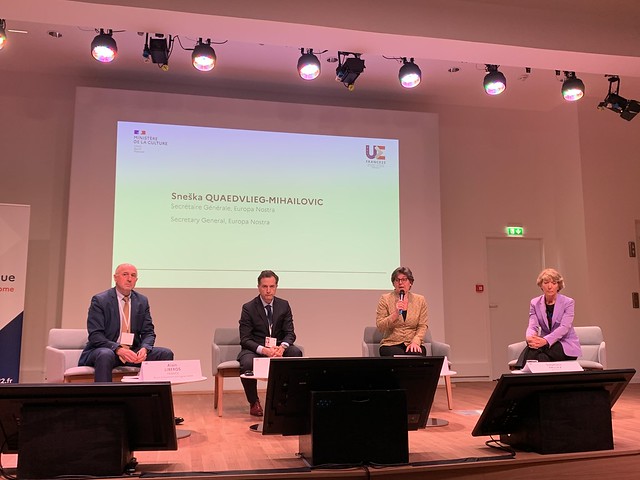 In her introductory remarks, Sneška Quaedvlieg-Mihailović congratulated Minister Bachelot for organising this important conference during the French Presidency of the EU Council. In such a difficult international context, the conference provides an occasion to mobilise, show solidarity and demonstrate that heritage fosters our shared sense of belonging to Europe. “The Europe of culture and heritage is the Europe of values, our most precious intangible heritage, which will always be at risk”. The Secretary General of Europa Nostra then appealed to the EU and its Member States as well as international organisations to scale up the ongoing humanitarian help by providing support to the cultural and heritage defenders in Ukraine to safeguard our shared legacy for future generations.

Stefano Dominioni reminded the values at the core of the Council of Europe and how the Cultural Routes contribute to human rights, cultural diversity, intercultural dialogue and mutual exchanges across borders. He also emphasised the importance of the programme in teaching history in a European context and fostering awareness and a shared sense of belonging. Mr Dominioni then presented a few Cultural Routes among the 30 existing ones, which cover various themes, such as architecture, landscapes, religious heritage, gastronomy and music.

Alain Libéros presented a concrete example of a Cultural Route of the Council of Europe: the European Route d’Artagnan, the very first equestrian itinerary for tourism and culture. The itinerary features incredible cultural and natural heritage, including 172 historical sites across 6 countries, 17 regions, 60 departments and 400 municipalities, and thus makes culture accessible to all citizens. As such, it is a perfect example of social and sustainable cultural tourism, at a time when well-being has gained importance across citizens and communities.

In a video message, Béatrice Taulegne underlined that culture and heritage are vital resources for regions and cities across Europe as a societal, economic and budgetary pillar, but also as a vector of dialogue between communities. In the frame of the Conference on the Future of Europe, citizens have expressed their interest in promoting and raising awareness of Europe’s shared culture and heritage and its transformative power for our societies. As the level closest to citizens, it is therefore essential to ensure the due involvement of local and regional authorities in heritage policies and actions.

In the current international context, Stéphane Pallez recalled that lotteries across Europe were born as an emergency and solidarity initiative to rebuild our continent after World War II. She then presented the Loto du Patrimoine, a successful initiative to save endangered heritage in France and an exemplary public-private partnership between the Française des Jeux, the Fondation du Patrimoine – through the Mission Stéphane Bern – and the French Ministry of Culture. Since 2018, it has increasingly sparked citizens’ mobilisation around their shared heritage, thus fostering their multi-layered identity – local, regional, national and European.

The roundtable concluded with a few questions from the audience and the moderator, particularly on the possibility to organise a coordinated heritage lottery at European level, which could take place on the occasion of the European Heritage Days – an innovative funding instrument that could be launched in the frame of the French Presidency of the EU Council.

The Secretary General of Europa Nostra summarised the discussion and emphasised the key words: solidarity, values, partnerships and hope.

After welcoming all participants, Jean-François Hebert, Director General of Heritage and Architecture at the French Ministry of Culture, expressed his solidarity with Ukraine, its citizens and its heritage, which is endangered due to human-made and intentional destruction. He then provided an overview of the conference programme, each roundtable focusing on a specific risk: sanitary crisis, climate change, illicit trafficking, mass tourism, digital transition or knowledge transfer.

Catherine Magnant, Head of the Culture Unit at the European Commission, highlighted the integration of cultural heritage across European policies as a success story, especially since the milestone of the European Year of Cultural Heritage 2018, which culminated with the publication of the European Framework for Action on Cultural Heritage. Only 4 years later, cultural heritage has been duly integrated into key policies and programmes of the EU, such as regional development, the environment, education and the digital transition.

Bénédicte Selfslagh, engineer-architect, President of the European Jury 2013-2019, President of ICOMOS Belgium (2017-2020), and Alberto Garlandini, President of ICOM International, introduced the theme, defining the risks, state of play and typology of responses. Bénédicte Selfslagh focused on the history of risks in the international conventions, the new types of risks, the need to improve risk management, as well as upcoming challenges. Alberto Garlandini highlighted how ICOM is supporting museum professionals in Ukraine to mitigate risks to cultural heritage. He also emphasised that crises and risks are also opportunities to create new and more sustainable models, fostered by international cooperation.

In a video message, MEP Laurence Farreng (Renew Europe, France) presented how cultural heritage is a strategic resource as a vector to achieve key policy priorities of the European Union. As coordinator of the Culture and Education working group of the Conference on the Future of Europe, she also highlighted that citizens value culture and heritage as elements that bind Europeans together.