The expert mission to the former Prinkipo Orphanage, listed among the 7 Most Endangered heritage sites in Europe in 2018, took place in Istanbul on 29-31 May. The building is in in a very poor condition and deteriorating rapidly but, despite its unsafe state, the members of the mission were able to spend some time assessing its condition and the surrounding area. This mission had been preceded by a visit from Clive Dawson, a structural engineer with wide experience of work on historic buildings. His report reinforced the need for urgent action to save the building. The former orphanage is situated on Buyukada, one of the Prince’s Islands, a fairly short ferry ride across the Sea of Marmara from Istanbul. John Sell, chair of the 7 Most Endangered Advisory Panel, Mario Aymerich, Technical Advisor to the European Investment Bank Institute (EIB-I) and Ambassador Alexander Philon of Europa Nostra, were hosted by Europa Nostra Turkey, nominator of the site, and the Istanbul Orthodox Patriarchate of Constantinople, the owner of the building. The main organisers of the mission were Burçin Altinsay Özgüner, Chair of Europa Nostra Turkey and Laki Vi̇ngas, representative of the Patriarchate. 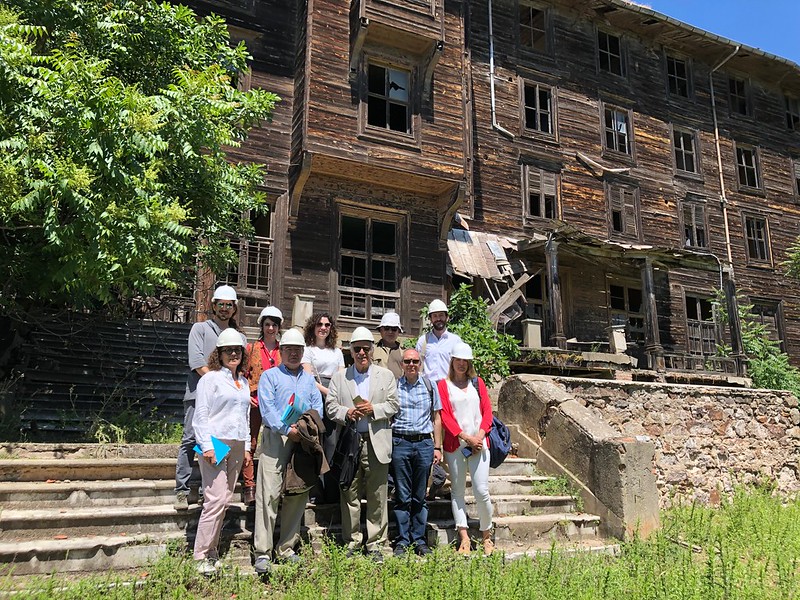 On Büyükada island, the mission met the deputy mayor, the head of Municipal Planning Office and representatives of local NGOs. Back in Istanbul, a series of meetings were hosted at the Istanbul Orthodox Patriarchate designed to elicit the views of the immediate and main stakeholders, and to agree a way of securing the long-term future of the building.

On 30 May, back in Istanbul, a productive exchange of views took place with members of the Protection Board, part of the Ministry of Culture and Tourism of the Republic of Turkey who recognised the urgency of the situation and undertook to deal with a request for permission to carry out temporary stabilisation and protection of the building both expeditiously and flexibly. His holiness the Patriarch personally attended and expressed his views regarding the future of the Orphanage.

On the same day in the afternoon, main stakeholders were asked for their views on possible future uses for Prinkipo Orphanage among which was the use of the building as a center for interfaith dialogue and for addressing environmental issues. It was also noted that because of its former use, the Orphanage had emotional and other intangible values in addition to the architectural and historic values demonstrated by the physical fabric of the building. Few possible uses were ruled out and there was a general recognition that the size of the building (about 15,000 m2) meant that a likely outcome would be a mix of compatible uses.

On the final day of the visit, members of the mission, meeting at the Istanbul Ecumenical Patriarchate, Fener, were delighted to be joined by Mr. Christian Berger, EU Ambassador to Turkey, who reinforced the importance of the former orphanage not only within greater Istanbul and Turkey but to the whole of Europe.

Members of the mission emphasised the importance of carrying out temporary works of stabilisation and protection as a matter of urgency. They welcomed the very supportive actions of the Protection Board and urged the Patriarchate to make use of the knowledge and skills of Europa Nostra and Europa Nostra Turkey in obtaining that advice. This urgent work is necessary to allow for the careful consideration of the future of the former Prinkipo Orphanage. A full report of the mission and its findings, including a summary of the preliminary report by Clive Dawson, will be published shortly.