Europa Nostra, the European Voice of Civil Society committed to Cultural Heritage, has backed the campaign to save the ‘Y-block’ in Oslo, one of Norway’s most important modern buildings. The ‘Y-block’ is among the 14 European heritage sites shortlisted for the 7 Most Endangered programme 2020, which is run by Europa Nostra in partnership with the European Investment Bank Institute.

The ‘Y-block’ in Oslo, so-called because of its plan shape, is recognised in Norway and internationally as a leading example of modernist architecture, enhanced by famous murals specially created by Picasso in cooperation with the Norwegian and international artist Carl Nesjar. The government plans to demolish the building because of security concerns in the wake of the 2011 tragedy, but Fortidsminneforeningen – The National Trust for Norway believes the building’s international significance means it deserves a reprieve and nominated it for the 7 Most Endangered programme 2020. 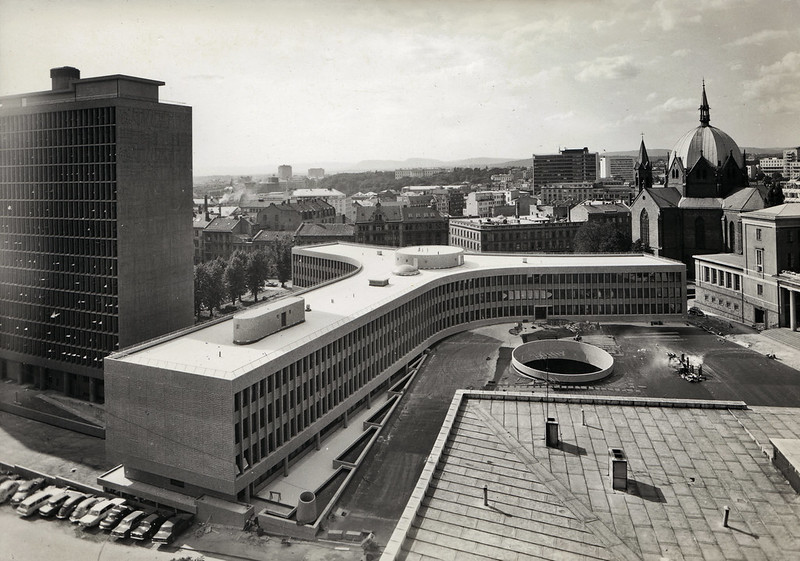 Fortidsminneforeningen believes the Y-block has a future which can translate a dark moment into a lasting meaningful benefit, symbolising peace in European society. The huge front wall with the three youngsters standing in a boat under the sun, pulling in a net with three big fishes, is already a vibrant memorial to the value of youth and their many meaningful activities aimed at the future.

In November 2019, the Advisory Panel of the 7 Most Endangered, comprising international experts in history, archaeology, architecture, conservation and finance, included the Y-block in the 2020 shortlist. This provides an opportunity for anyone who wants to save the building to support Fortidsminneforeningen.

In December 2019 Graham Bell, a member of Europa Nostra’s Board and the 7 Most Endangered Advisory Panel, joined Fortidsminneforeningen to celebrate its 175th anniversary. His mission was to present Fortidsminneforeningen with a Grand Prix of the European Heritage Awards / Europa Nostra Awards 2019 for outstanding dedicated service to European cultural heritage, and support its campaign for the Y-block. Bell has been involved in a range of comparable modernist buildings at risk in the United Kingdom and around Europe, including Helsinki-Malmi Airport in Finland and the Buzludzha Monument in Bulgaria, which were included in the lists of 7 Most Endangered 2016 and 2018, respectively.

Having joined a candle-lit gathering outside the building, and with various briefing meetings to hear more about the issues, Graham Bell could see an alternative way forward which offers benefits for everyone: “demolition of a problem is not a solution here or an appropriate precedent for Europe. Fortidsminneforeningen has suggested the building should house the Nobel Peace Center, which is a much more constructive approach, adopting the creative inspiration of Picasso and demonstrating the resilience of Norway. It also removes the risk to government, which has been a key argument; the area has capacity to build additional accommodation to relocate staff.” Bell went on to say, “at a time when climate concerns are causing all of us to question how we can reduce our environmental impact, demolishing a perfectly sound building would be a waste of carbon in the energy consumed in demolition and in lost materials.”

Europa Nostra has offered to meet government representatives and will continue to support Fortidsminneforeningen.