Europa Nostra was delighted to attend the conference “Fostering European Cooperation for Cultural Heritage at Risk” that took place on 27-28 February 2020 in Dubrovnik, Croatia. The objective of the conference was to discuss the state of play at national, international and European level of preparedness strategies and to raise awareness on the available instruments at EU level for risk reduction, both in terms of innovation and management. Moreover, the event stressed also the importance of the integration of cultural heritage in disaster risk management and the necessity to foster international and European coordination at multiple levels, especially in case of disasters with a transnational impact. 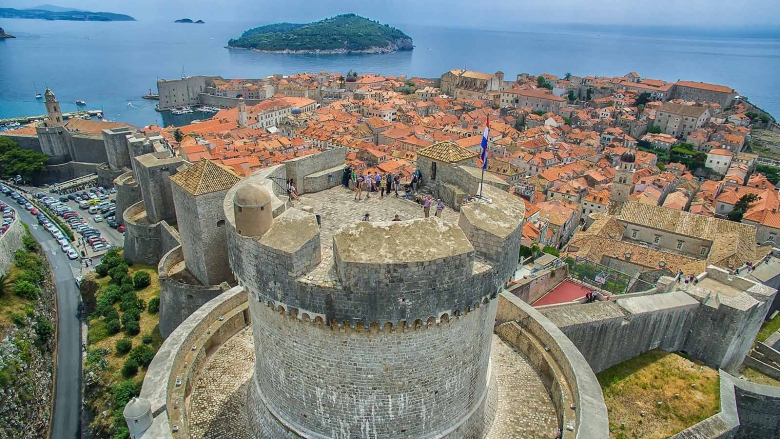 Around 160 participants from national, European and International institutions, such as the European Commission, UNESCO, ICOMOS and ICCROM, universities and civil society organisations attended the conference, certainly one of the most relevant cultural heritage events organised during the Croatian Presidency.

The event was organised during Croatia’s EU Council Presidency by the Ministry of Culture of Croatia with the support of the European Commission, the City of Dubrovnik, the Dubrovnik-Neretva County and the Dubrovnik Tourist Board. The conference took place in the Lazareti, the historic quarantine structure of the city and a remarkable monument, once endangered and recently restored and transformed into a cultural and creative hub with the support of Croatian authorities and EU funds, and with the involvement of local NGOs.

The opening session of the conference was introduced by a message from Mariya Gabriel, European Commissioner for Innovation, Research, Culture, Education and Youth, which addressed the risks affecting Cultural Heritage and the important contribution of the European Commission via programmes, studies and also thanks to the help of the Civil Protection Mechanism work at European level.

We 💯% support the powerful message sent by Commissioner @GabrielMariya to #HeritageDubrovnik2020 Conference:

“We need to ensure that #CulturalHeritage in Europe passes safely to the next generation”.

You can count on us for this important task! @min_kulture_hr @EU2020HR

Welcome speeches featured, among others, powerful messages delivered by the Minister of Culture of the Republic of Croatia, Nina Obuljen Koržinek, and the Mayor of Dubrovnik, Mato Franković.

In her speech, the Minister of Culture of the Republic of Croatia stressed the need to build resilience to raise awareness about endangered heritage and its preservation, especially at local level. She stated: “If Cultural Heritage is high on the political agenda, everything else will follow!” Europa Nostra fully supports her statement and the important priority which the Croatian Presidency has given to Europe’s cultural heritage which is facing many threats.

Moreover, the Mayor of Dubrovnik highlighted that tourism and urbanisation are major interlinked risks for historic cities like Dubrovnik and gave participants an overview of the challenging but necessary “sustainability path” that the city is following in the past years. “We must put people and not income at the centre of our strategy and action”, he stressed.

Our Secretary General, Sneška Quaedvlieg-Mihailović, together with Board Member from Italy, Prof. Paolo Vitti, featured as speakers during the two days of this important debate. Moreover, Jimmy Jamar, Director of the Brussels Office, Sara Zanini, Project officer responsible for the 7 Most Endangered programme, also attended the conference as part of the Europa Nostra delegation. Bruno Rossignol, representative of our partner, the European Investment Bank Institute, was also among the participants.

Together with our Secretary General, the final panel of the conference was constituted by Catherine Magnant, Head of the Cultural Policy Unit at the European Commission (DG EAC), Lazare Eloundou Assomo, Director of Culture and Emergencies at UNESCO, Andrew Potts, Coordinator of the Climate Heritage Network and Chair of the ICOMOS Climate Change and Heritage Working Group, and Patrick Dondelinger, Head of Studies at the National Centre for Audiovisual of the Ministry of Culture of Luxembourg.

In her concluding intervention entitled “Civil Society, a Vital Partner for Europe’s Mobilization to Save Endangered Heritage”, Sneška Quaedvlieg-Mihailović stressed the importance to act at all levels of governance, civil society and expertise in the common mission to prevent and avoid further loss of heritage. Asking whether we could imagine Europe and our society without heritage, she underlined the need for political courage in making choices that can benefit the people and their quality of life, especially in destinations where mass tourism is becoming increasingly difficult to manage.

Furthermore, our Secretary General re-launched the idea of the creation of a “European Solidarity Fund for Heritage at Risk” to urgently help endangered heritage in Europe. In this regard, Europa Nostra has been running the “7 Most Endangered” since 2013, with the fundamental support of the European Investment Bank Institute and the European Union. This programme is our flagship for heritage at risk. It identifies endangered monuments and sites in Europe and mobilises public and private partners – on a local, national and European level – providing technical heritage and financial expertise to find a viable future for sites that are crying for help. Our Secretary General also stressed the necessity of a long-term, shared vision, where the 7 Most Endangered programme could be used as an instrument for a much larger mobilisation on a technical, financial and political level, unified under the Europa Nostra motto “Pour le meilleure, contre le pire !”.

“Two years after the #EYCH2018 & our #BerlinCallToAction we have a momentum, but ⏰ is still ticking and it’s high time for #culturalheritage to go on 🔝 of the political agenda.”#EuropeForCulture pic.twitter.com/UA0hz1KymO

During the conference, Sneška Quaedvlieg-Mihailović, together with Catherine Magnant from the European Commission, presented to the Minister of Culture of Croatia, Nina Obuljen Koržinek, the “Europe Special ” of our magazine “Heritage in Action” covering the messages and achievements of the European Year of Cultural Heritage 2018.

At #HeritageDubrovnik2020 Conference we had the pleasure of presenting to Croatian Minister of Culture @NObuljen the “Europe Special” of our #HeritageInAction Magazine.
We applaud her commitment to pursue & step up the momentum of the #EYCH2018 during @EU2020HR & beyond 👏👏👏 pic.twitter.com/OmfxdYxe1T

Prof. Paolo Vitti contributed to the panel on “how to strengthen the capacity for disaster response and recovery” with an intervention entitled ‘Time to reconsider our strategies: heritage as a beacon for a better future’. He highlighted the important role played by quality interventions and expertise in heritage restoration works and interventions. Furthermore, he called on the importance to convince decision-makers to allocate funds and to switch into a participatory approach in heritage interventions to improve social cohesion and quality of life.

“By a matter of fact, heritage does not exist per se, but it needs to be acknowledged. A heritage which loses values is a heritage at risk as much as a heritage threatened by climate or war disasters. Bringing back heritage as a central value of the society can thus mitigate damage on heritage.”

Our Board member @pauvitti at #HeritageDubrovnik2020 Conference calls for➕sustainable & resilient policies on heritage and tourism: “We need a change of approach on #CulturalHeritage interventions, towards a participatory approach to support social cohesion and quality of life” https://t.co/NyWQV6gL42

One of the overall key messages from the conference focused on the role of community resilience and international cooperation when it comes to endangered heritage projects and risk prevention. It emerged that not many countries are trained for post-disaster risk preparedness and there is a lack of coordination when it comes to heritage risk assessment measures.

Furthermore, another fundamental topic discussed at the conference was the current climate emergency and how heritage professionals can work and be prepared by sharing their know-how and by acknowledging their role and contribution. In this regard, as Andrew Potts suggested, we all need to engage across different fields to achieve “win-win” situations through engagement and complete support to climate action and also to consider climate change as a fundamental component of risk preparedness for cultural heritage.

Our organisation is actively part of the Climate Heritage Network and in Dubrovnik our Secretary General announced a new cooperation between Europa Nostra and Andrew Potts, in his capacity as the Chair of the ICOMOS Working Group on Climate Change and Cultural Heritage. The outcome of this cooperation will be a “Green Paper” as a contribution of the cultural heritage community to the EU Green Deal to be submitted to the European Commission ahead of our European Cultural Heritage Summit in June 2020 in Brussels.