A delegation composed of representatives of Europa Nostra and its partner the European Investment Bank Institute (EIBI) went to Kosovo* last week for a series of heritage visits and exchanges with local and international stakeholders. This visit was organised, primarily, as a follow-up to the inclusion of the Dečani Monastery (which was inscribed on the UNESCO List of World Heritage in Danger1 in 2006) on the 2021 List of 7 Most Endangered heritage sites in Europe, as part of the 7 Most Endangered programme run by Europa Nostra in partnership with the European Investment Bank Institute. 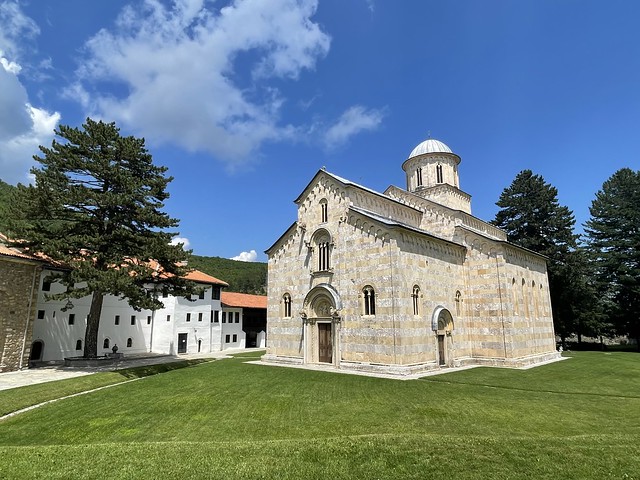 The Europa Nostra/EIBI delegation visited the following heritage sites: Novobërdë/Novo Brdo (on 4 July), the Visoki Dečani Monastery (on 5/6 July), the historic town of Prizreni/Prizren, including its historic cinema Kino Lumbardhi (on 6 July), and the Church of the Holy Virgin of Ljeviš (on 7 July), as well as the Gračanica Monastery (on 7 July).

The key issue discussed with various interlocutors was the inclusion of the 14th century Serbian Orthodox Monastery of Visoki Dečani on the 2021 List of 7 Most Endangered sites in Europe and the options to improve the situation. One year after the publication of this List, the main reasons for the inclusion of this World Heritage Site in Danger also on Europa Nostra’s List of 7 Most Endangered have remained valid. Firstly, no final solution has yet been agreed by all parties with regard to the consequences caused by the plans to increase traffic within and around the Special Protective Zone of the Dečani Monastery, nor regarding other announced interventions, such as the riverside project, that could negatively affect the natural environment of the Monastery which is to be considered as an integral part of its outstanding heritage value. Secondly, the 2016 decision of the Kosovo Constitutional Court confirming the Dečani Monastery’s ownership of 24 hectares of land has not yet been implemented through lawful registration of the Monastery’s land, which undermines the rule of law and the legal security of this living Monastery with its surrounding land. Thirdly, due to complex security challenges, the Monastery needs to continue to be guarded 24/7 by KFOR troops, as confirmed by the KFOR Commander. The Dečani Monastery is also occasionally confronted with unfounded attempts to revise the cultural and historical identity of this religious heritage site, a tendency which is not in line with the European and international principles of accurate historical and artistic interpretation of historic monuments and heritage sites.

Bishop Teodosije received the @europanostra delegation at Gračanica #Monastery today. #Serbian #Orthodox #Church is determined to preserve her holy sites in #Kosovo & is open for dialog with all people of good will. But SOC expects authorities to honor its legal commitments too. pic.twitter.com/PrNBtRZ8V9

Ministers Aliu and Çeku restated the strong objection of the Kosovo Government to the inclusion of the Dečani Monastery on the 2021 List of 7 Most Endangered Sites in Europe, which they see as damaging to the reputation of Kosovo. According to their assessment, this heritage site is not endangered. Concerning the traffic issue, it is encouraging that Minister Aliu presented a new plan of the Kosovo Government to solve this matter, as part of the wider spatial planning as well as the sustainable and green development of the Bjeshkët e Nemuna/Prokletije National Park. It is important that this plan is discussed – both at technical and political level – within the Implementation and Monitoring Council set up by the Kosovo Law on Special Protective Zones.

Many thanks to Minister of Environment, #LiburnAliu & Minister of Culture @HCeku for receiving our delegation at the end of our visit to Kosovo. Minister Aliu presented a constructive plan for green tourism in SPZ & wider region of @DecaniMonastery which excludes heavy traffic pic.twitter.com/zvIxZqB5MU

On the basis of the meetings and talks held last week in Kosovo, on the basis of the visit to the Dečani Monastery and its Special Protective Zone, as well as on the basis of any further talks and examination of relevant additional documents, Europa Nostra and the European Investment Bank Institute will produce – in line with the standard procedure of our 7 Most Endangered Programme – a comprehensive report with a series of recommendations to be made public in the autumn.

“Our annual List of 7 Most Endangered aims to act as a positive catalyst for change by building bridges between various stakeholders concerned and by mobilising their joint action for ensuring a sustainable future for each of the selected sites. We are glad that over the years, we were able to contribute to finding constructive and satisfactory solutions to save a series of heritage sites included on our List of 7 Most Endangered, always in respect and dialogue with authorities concerned. We are confident that we shall eventually be able to play such a positive civil society role also in the case of the Serbian Orthodox Monastery of Visoki Dečani with the vital contribution of all relevant local and European authorities. In this way, we shall together contribute to the enhancement of Europe’s shared values and shared heritage as a vector of peace and prosperity in Kosovo and in the wider region of the Western Balkans,” stated Guy Clausse, Executive Vice-President of Europa Nostra, who acted as the head of delegation during its visit to Kosovo.

Productive meeting with NGO @ChwbKosovo Team & Director @salishoshi during our visit to #Kosovo.
We discussed their action & views on cultural heritage situation in Kosovo, focusing a.o. on spatial planning issues & involvement of local community in the area of #DečaniMonastery pic.twitter.com/13D9Nvftkf

As mentioned above, representatives of Europa Nostra and the EIBI also visited the heritage site of Novobërdë/Novo Brdo, which is listed among the 46 Special Protective Zones in Kosovo. Following the serious technical errors that occurred during the latest “Revitalisation of Novobërdë/Novo Brdo Fortress Project”, which was funded by the European Union and implemented via UNESCO, this site has been nominated for the 7 Most Endangered Programme 2022 by Cultural Heritage without Borders Kosovo, with the endorsement of the Kosovo Minister of Culture Youth and Sport. Taking into account that the project implementation partners confirmed that they are ready and able to repair the works which were executed with unsuitable material and techniques, Europa Nostra and EIBI did not consider it necessary to include this site on the 2022 List of 7 Most Endangered. However, the Europa Nostra/EIBI delegation visited the Fortress as well as the remains of the medieval St Nicholas Church, located nearby the Fortress, with some recent and similarly damaging interventions. Europa Nostra deplores the shortcoming of these interventions and remains at the disposal of authorities concerned to offer any additional international heritage expertise which could be useful for ensuring the highest standards of heritage protection, conservation and interpretation for any future project to be undertaken at the site of Novobërdë/Novo Brdo, which has a heritage significance for the whole of Europe.

Last but not least, in Prizreni/Prizren, the delegation of Europa Nostra and EIBI had the pleasure of visiting the Lumbardhi Cinema, congratulating the Lumbardhi Foundation and their partners DokuFest, EC Ma Ndryshe and CHwB Kosovo on winning one of the European Heritage Awards / Europa Nostra Awards 2022. The delegation was impressed by the wide civil society mobilisation to save this cinema from privatisation and demolition, transform it into a protected heritage site open for all and ensure significant EU funding for the forthcoming revitalisation of the Lumbardhi Cinema building. Representatives of the Lumbardhi Foundation and their partners will celebrate their Award on 7 August in Prizreni/Prizren during the DokuFest 2022 and at the European Heritage Awards Ceremony on 26 September in Prague, a highlight of the European Cultural Heritage Summit 2022 organised by Europa Nostra as part of the official programme of the Czech Presidency of the Council of the European Union.

👏Energizing meeting at #kinolumbardhi with proud winners of one of 2022 #EuropeanHeritageAwards.
📽️By mobilising #CivilSociety, a beloved cinema in #Prizren was saved from privatisation & demolition & reclaimed as #culturalheritage site open to all.
See you in Prague on 26/9! pic.twitter.com/gnUEOSWNzv

* This designation is without prejudice to positions on status, and is in line with UNSCR 1244/1999 and the ICJ Opinion on the Kosovo declaration of independence.
1 This status was reconfirmed once again at the last annual meeting of the UNESCO World Heritage Committee held in Fuzhou (China) in July 2021.