May it please Your Majesty,

I write on behalf of Europa Nostra, the European Voice of Civil Society committed to cultural heritage to offer you, the Royal Family and the British people our deepest condolences upon the passing of Her Majesty, The Queen. We have the highest esteem and profound admiration for the unique legacy which your beloved mother left in the UK, in Europe and across the world during the 70 years of her reign. Together with our President Cecilia Bartoli, our Executive President Professor Dr. Hermann Parzinger and all our members and supporters across Europe and beyond, we mourn the loss of such an exceptional woman and leader who will be celebrated and remembered as one of the most remarkable – if not the most remarkable – world personality of the 20th and early 21st century.

At the same time, may we humbly and respectfully honour your accession, wishing you grace and success in the exercise of your important duties. Alongside your mother, HM the Queen, you have been an inspiration to so many people and organisations in the UK and across Europe. This is especially the case for those concerned with safeguarding and promoting cultural identity, tradition, the sense of place and the sense of belonging as key values for forging a beneficial relationship between communities and their living environment. The spheres of influence of your respective and complementary roles across the world have been appreciated in the numerous messages of gratitude expressed over recent days. 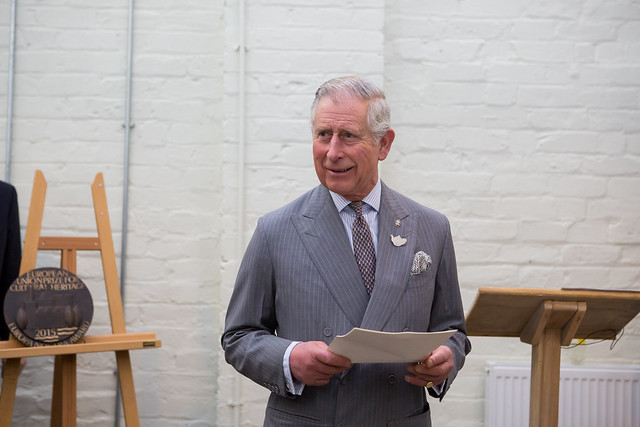 Europa Nostra has pride and pleasure in having been able to confer upon you, in your capacity as the visionary Founder and Patron of the Prince’s Regeneration Trust, one of our European Heritage Awards/Europa Nostra Awards (2015) for the exemplary revitalisation of the Middelport Pottery in Stoke-upon-Trent. This has been amplified and deepened by the events currently unfolding. Your personal enduring commitment to the people of Europe, both notable and unsung, with their values and needs, combined with your exceptional care for Europe’s shared heritage, has resonated with and encouraged many people across national borders. Whilst acknowledging that accession will entail changed responsibilities and priorities, we sincerely hope that your dedication to leading by example on cultural and environmental issues will somehow find us continuing to share our common agendas, especially with regard to the vital intersection between cultural heritage and climate action.

The forthcoming 60th anniversary of Europa Nostra, which we shall celebrate throughout 2023, provides us with an ideal opportunity to remain closely aligned and to give a renewed impetus to the exemplary role of heritage organisations in the United Kingdom within our large European movement of civil society committed to cultural heritage.

I have the honour to remain, Sir,