The leading European heritage organisation Europa Nostra has been selected by the European Commission to be the organising partner of the annual European Union Prize for Cultural Heritage for a new period of 4 years, from 2015 to 2018. The selection was made following an open call for proposals launched at the beginning of this year on the basis of the new EU Creative Europe programme. The aim of the Prize is to highlight exemplary achievements related to heritage conservation, management, research, education and communication. In this way, the Prize will bring cultural heritage closer to European citizens and contribute to a stronger public recognition of cultural heritage as a strategic resource for Europe’s society and economy. It will also promote audience development for heritage in Europe. 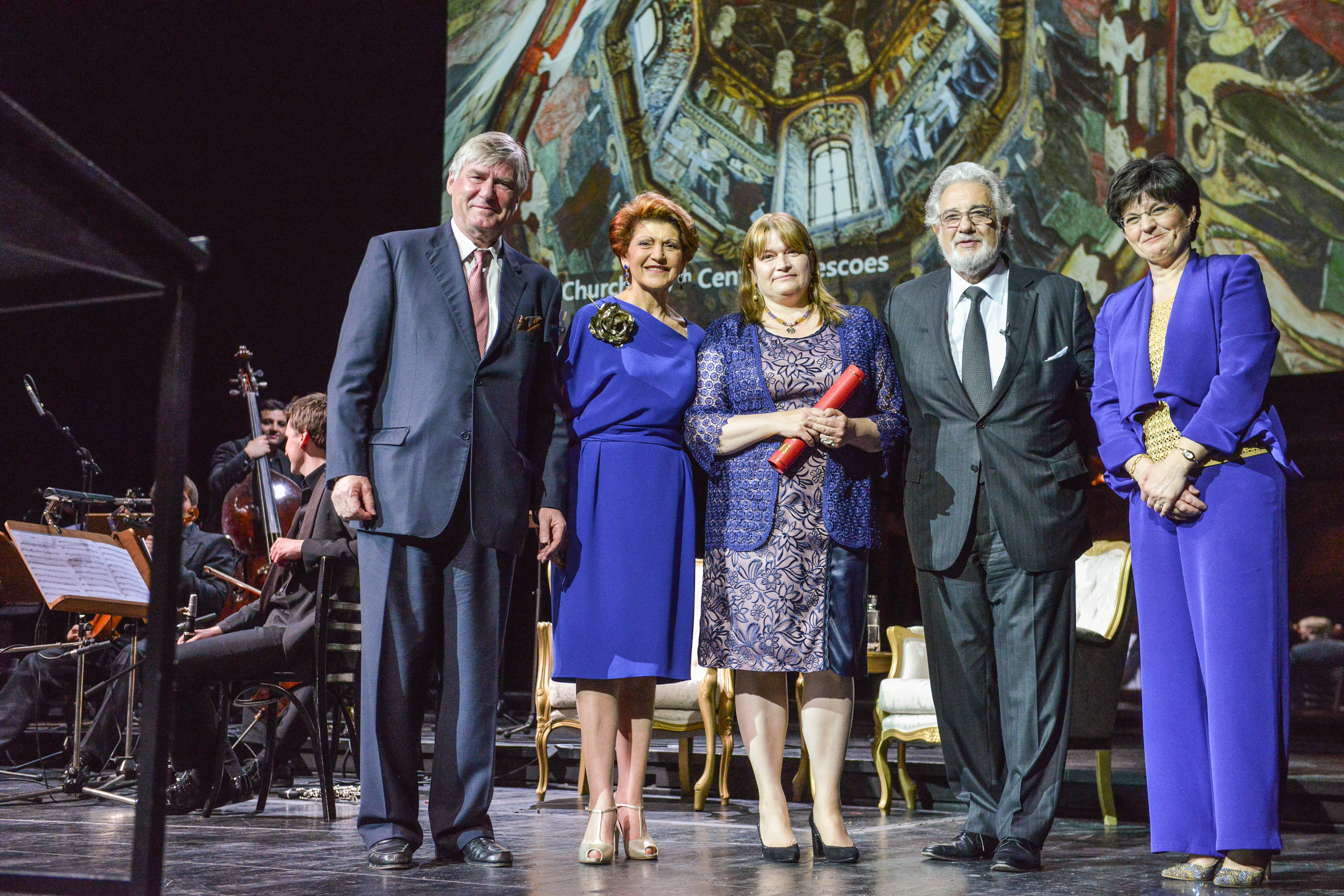 Denis de Kergorlay, Commissioner Vassiliou, winner of the Public Choice Award, Maestro Plácido Domingo, and Sneška Quaedvlieg-Mihailović at the European Heritage Awards Ceremony at the Burgtheater in Vienna on 5 May 2014. Photo: Oreste Schaller.

The partnership between Europa Nostra and the European Commission for the running of this Prize was initiated in 2002 and was renewed in 2007, with the support of the previous EU Culture programme. The call for entries for the 2015 edition of the EU Prize for Cultural Heritage / Europa Nostra Awards will be launched in mid-June 2014. The deadline for submissions in four different categories will be on 15 October.

“We – the European Commission and me personally – are happy to continue to manage the EU Prize for Cultural Heritage together with Europa Nostra. Thanks to your organisation, the Prize has become over the years prestigious, visible and convoyed; a really solid example of European added value and a symbol of the dedication of the EU to its cultural heritage. With Europa Nostra we have the assurance to make it ever more attractive and efficient, for the sake of the diversity of European heritage, its preservation for future generations and also its economic benefits for the continent,” stated Karel Bartak, Head of Unit ‘Creative Europe programme – Culture’ of the European Commission.

“Europa Nostra is very proud to continue its fruitful partnership with the European Commission. Much has been achieved over the past 12 years: we have put a spotlight – both at European and national level – on almost 400 remarkable heritage achievements and have thus celebrated excellence and promoted cross-border exchanges of best practices in the heritage field. But there is much more to be done. In the years to come, we shall work with even greater enthusiasm, creativity and commitment on further raising the reputation and outreach of our Awards scheme across Europe and beyond,” affirmed Denis de Kergorlay, Executive President of Europa Nostra.

Speaking at the 2014 European Heritage Awards Ceremony held on 5 May in Vienna, Androulla Vassiliou, European Commissioner for Education, Culture, Multilingualism and Youth, stressed: “Working in the field of cultural heritage, and in particular with Europa Nostra, has been one of the most rewarding experiences I had as Commissioner. I take this opportunity to warmly thank the President of the organisation, Maestro Plácido Domingo, and its Secretary General, Sneška Quaedvlieg-Mihailović, and, through them, Europa Nostra and its devoted members for our wonderful cooperation. I thank you for the inspiration you have given me and I wish you much success for the future.”

The EU Prize for Cultural Heritage / Europa Nostra Awards was launched in 2002 by the European Commission and has been organised by Europa Nostra since then. The Prize promotes excellence, inspires through the “power of example” and stimulates the exchange of best practices in the heritage field across Europe. It also aims to communicate to the general public the beauty and the economic and social value of our cultural heritage.

The Prize honours every year up to 30 outstanding heritage achievements from all parts of Europe. Up to seven are selected as Grand Prix laureates and one receives the Public Choice Award, chosen in an online poll. All the winners receive a certificate as well as a plaque or trophy. The Grand Prix laureates also receive €10,000 each.

The awards are given in four categories: Conservation; Education, Training and Awareness-Raising; Research and Digitization; and Dedicated Service by Individuals or Organisations. Specialist juries made up of independent experts assess the nominated projects and select the winners in the four categories.

The awards are presented to the winners at a major public event, which is hosted each year in a different European city. The 2014 European Heritage Awards Ceremony was held in Vienna, at the iconic Burgtheater, on 5 May. Athens hosted the ceremony in 2013, Lisbon in 2012 and Amsterdam in 2011.

The Prize has been supported by the EU Culture Programme, which invested almost €40 million in helping to finance heritage-related projects between 2007 and 2013. Other EU programmes have also provided support to culture and heritage, in particular the European Regional Development Fund which has, in the same period, allocated €6 billion for the preservation of cultural heritage, development of cultural infrastructure and support for cultural services such as vocational training, arts and heritage education. The EU Programmes for Research and Technological Development have provided a further €150 million for heritage projects in the past 15 years.

The new Creative Europe programme, which has a budget of nearly €1.5 billion over the next seven years (9% more than previous levels), will continue to support the Prize and transnational cooperation projects in the heritage field.

In addition to its intrinsic value, cultural heritage brings a significant contribution to job creation and growth. Cultural heritage is also a key resource for sustainable development and social cohesion. It is estimated that spending on conservation of cultural heritage by public and private bodies is worth €5 billion a year. Figurespublished by the Organisation for Economic Co-operation and Development (OECD) show that 40% of worldwide tourism has a cultural dimension.

About Europa Nostra
Europa Nostra – the Voice of Cultural Heritage in Europe – is a growing citizens’ movement for the safeguarding of Europe’s cultural and natural heritage. With its vast pan-European network of members (organisations and individuals), associates and partners, Europa Nostra is a highly influential lobby for cultural heritage. It also campaigns to save Europe’s endangered monuments, sites and landscapes. In 2013, Europa Nostra celebrated its 50th anniversary.