On 10 June 2015, a top-level delegation of Europa Nostra paid a visit to the Y-block located in the Government Quarter in the centre of Oslo, following its nomination to ‘The 7 Most Endangered’ programme 2016 by Fortidsminneforeningen – the Society for the Preservation of Norwegian Ancient Monuments. 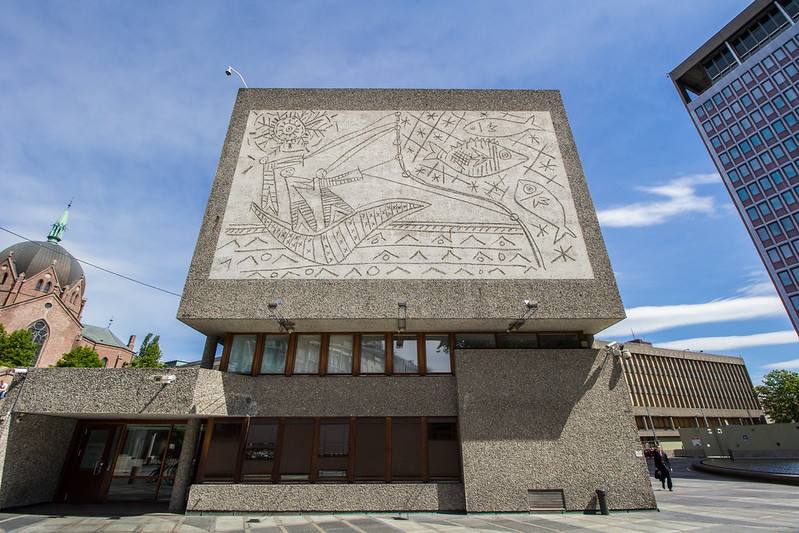 The Government Quarter was one of the targets in the 22 July 2011 terrorist attacks, when nine people were killed by a bomb blast in the area. Amongst the several buildings damaged was the Y-block. After initial discussions, including a proposal to build a new Government Quarter on a more remote site, the Norwegian government decided to redevelop the existing area but to demolish the Y-shaped building. A number of prominent organisations and individuals from Norway, as well as ICOMOS, are opposing this decision.

The visit was followed by a meeting during which representatives from Fortidsminneforeningen (Member Organisation of Europa Nostra) and Statsbygg – the Norwegian government’s key advisor in construction and property affairs (Associate Organisation of Europa Nostra) gave an introduction to the questions concerning the decision to demolish the building and responded to queries from the delegation.

The representatives from Europa Nostra stressed that it would be desirable that the entire ensemble designed by Erling Viksjø, comprising the Y-block and the high-rise building H-block, is preserved and duly incorporated in the redevelopment plan of the Government Quarter.

“What strikes me most is how the Y-block connects with its neighbouring buildings in a fabulous way, not least seen in relation to the church and the library at the rear of the building. They work well together. The construction technique, the use of sandblasted concrete reinforced with small stones, is also quite unique. The Y-block is in itself an outstanding piece of architecture,” stated Europa Nostra’s Executive Vice-President John Sell.

“There is always a possibility to make the authorities revise their decision in cases such as this, especially if public opinion is in favour. The final decision lies with the people of Norway. If they exert pressure on the authorities it still is possible to preserve this building”, he added.

“Statsbygg explained the reasons for tearing the Y-block down. It is important for Europa Nostra to listen to all parties involved in this case. We believe that the Norwegian authorities ought to continue investigating different options in order to preserve the building. We find it difficult to understand that it is impossible to reach a solution which complies with the authorities’ legitimate aim to enhance the security of the Government Quarter and at the same time ensures the preservation of the building,” stressed Europa Nostra’s Secretary General Sneška Quaedvlieg-Mihailović.