The European Commission’s Deputy Head of Unit from the DG Education and Culture, Alessandro Senesi, and Europa Nostra’s Secretary General, Sneška Quaedvlieg-Mihailović, announced the winners of the 2013 EU Prize for Cultural Heritage / Europa Nostra Awards at a joint press conference in Athens, at the office of Elliniki Etairia, Europa Nostra’s representation in Greece, on 26 March. This year, which marks Europa Nostra’s golden jubilee and coincides with the European Year of Citizens, some 200 projects were submitted from 30 countries. The laureates will receive their awards at a special ceremony in the Greek capital on 16 June. 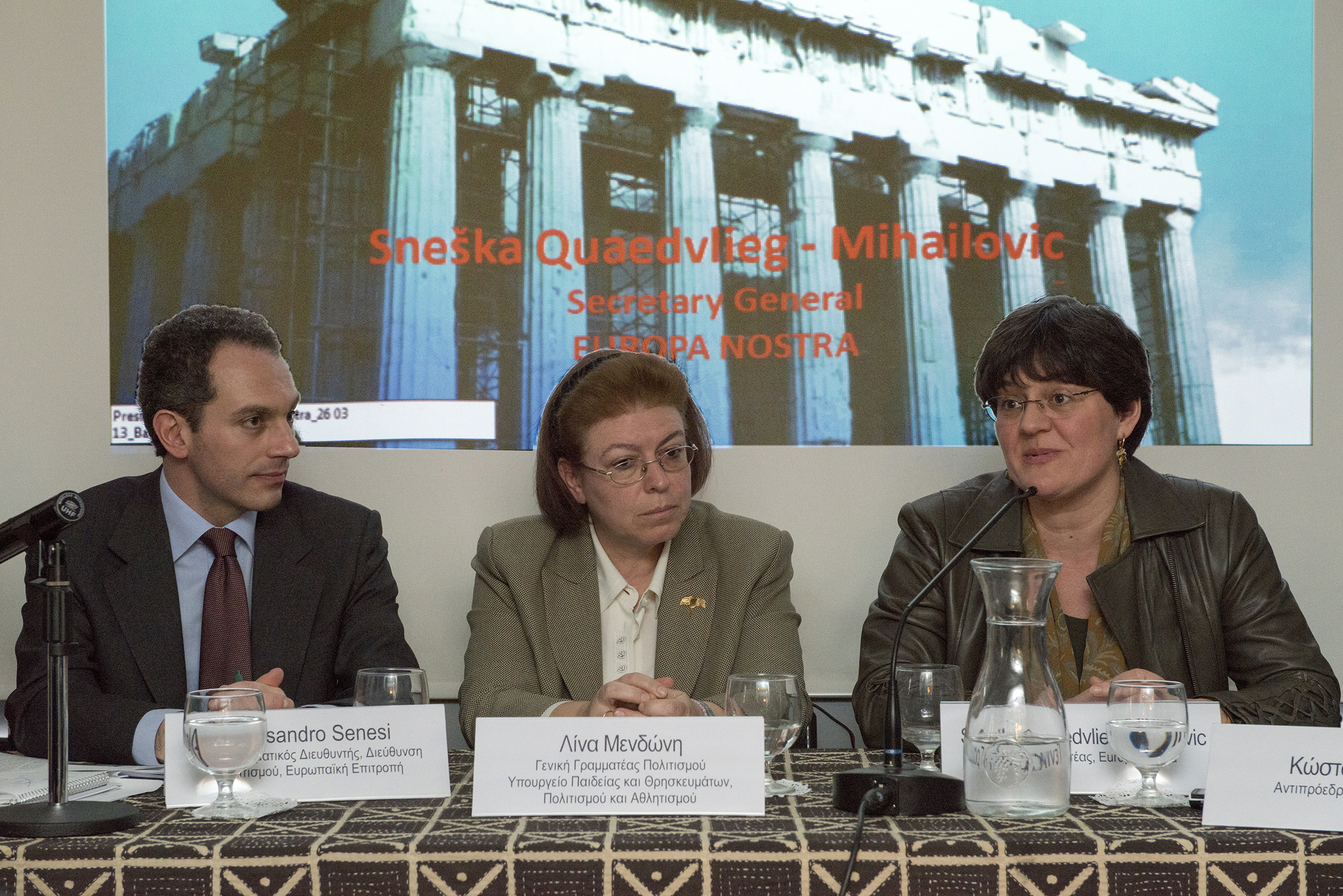 The European Commission’s Deputy Head of Unit from the DG Education and Culture revealed the 30 winners. Fifteen projects were rewarded in the conservation category, four in the research category, five in the dedicated service category, and six in the education, training and awareness-raising category. In his address, Alessandro Senesi stressed the importance of the EU Prize for Cultural Heritage / Europa Nostra Awards and gave a short account of the wider European Union policy objectives in the field of cultural heritage.

Europa Nostra’s Secretary General highlighted the fruitful partnership between the two organisations: “Europa Nostra has cooperated with the European Commission for many years. It is a paradigm of collaboration, aiming to promote excellence in the heritage field”.

“Many Greek projects have been recognised and Hellenic citizens and communities have demonstrated a strong commitment to safeguarding their cultural and natural heritage”, stated Sneška Quaedvlieg-Mihailović. In this year’s edition, tribute is paid to the exemplary maintenance of Propylaea’s Central Building, a monumental gateway to the Acropolis, and the exceptional expertise developed by the Committee for the Conservation of the Acropolis Monuments (ESMA). Volunteers from this committee have contributed to the planning, direction and supervision of the restoration works on that supreme monument of European culture since 1975.

After congratulating the Greek winners, the Secretary General for Culture of the Hellenic Ministry for Religious Affairs, Education, Culture and Sports, Lina Mendoni, emphasised the importance of hosting the 50th Anniversary Congress of Europa Nostra in Athens and acknowledged the huge potential of heritage as a source of economic growth.

The European Heritage Awards Ceremony will take place at the Odeon of Herodes Atticus at the base of the Acropolis on the evening of 16 June, in the presence of Karolos Papoulias, the President of Greece, Androulla Vassiliou, European Commissioner for Education, Culture, Multilingualism and Youth, and Plácido Domingo, the world-renowned opera singer and Europa Nostra’s President. “The ceremony will include a cultural and musical performance which will express the inextricable link between Europe’s tangible and intangible heritage and highlight the deep connection between Greek literature and music and the natural environment in which it has flourished over thirty centuries”, revealed Costa Carras, Europa Nostra’s Vice-President and Elliniki Etairia’s founding President. “It is our great pleasure to invite you to attend Europa Nostra’s European Heritage Congress in Athens”, he added.

The press conference was attended by 50 people, including national and local media, foreign correspondents and top-level representatives of European embassies.