Europa Nostra, the leading European heritage organisation, and the European Investment Bank Institute made public today the technical and financial report for the rehabilitation of the 19th century stage machinery of the Bourla theatre in Antwerp in Belgium, listed among ‘The 7 Most Endangered’ heritage sites in Europe in 2014, following a nomination by PERSPECTIV – Association of Historic Theatres in Europe. The Bourla theatre is under the ownership and is the responsibility of the City of Antwerp. 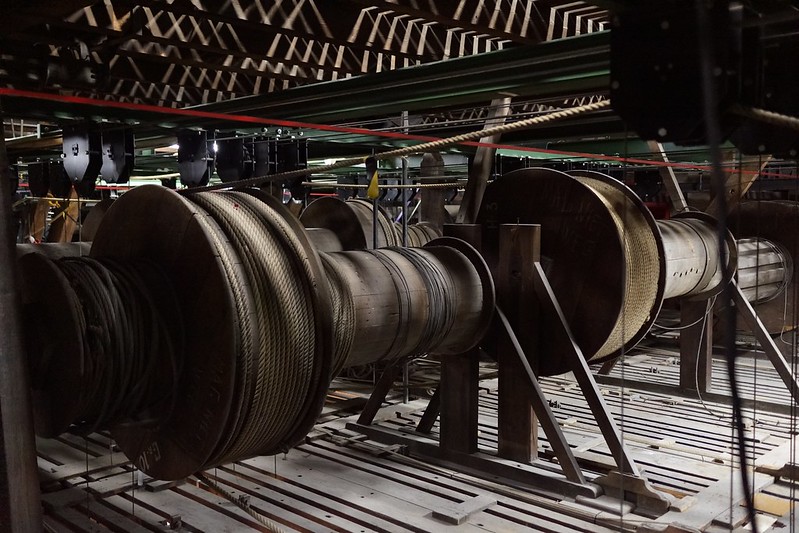 “The optimal result would be returning the stage, structure and machinery to full operation, with a team of technicians trained in the operating and maintenance practices needed to ensure the long-term operational security of the theatre, and to present a combination of period and contemporary theatrical productions using the machinery,” stresses the independent report led by Campbell Thomson, Technical Consultant provided by the European Investment Bank Institute.

“The Bourla is unique in Belgium in its operating systems, and in Europe it is one of the few remaining examples of early 19th century theatre technology. Looking at the theatre from a purely heritage perspective, there is a clear case for the reinstatement option,” advocates the report. “A revitalised historic dimension to the theatre would allow it to make a substantial contribution to the City’s planned 2018 Baroque Festival Year,” it is noted. From a financial perspective, “reinstatement costs might be small relative to dismantlement and redevelopment costs of 18 million euros” estimated in the feasibility study made on the instruction of the City of Antwerp in 2014.

This technical and financial report was prepared on the basis of the outcomes of the two missions in Antwerp undertaken in October and December 2014, during which representatives from Europa Nostra, the European Investment Bank Institute and PERSPECTIV, together with renowned theatre and restoration experts, visited the Bourla theatre and its historic stage machinery and held long talks with the key stakeholders, namely the City of Antwerp and the resident company Toneelhuis.

In mid-March 2015, Europa Nostra organised a working visit for all the stakeholders to four theatres in England – the Theatre Royal and the Tyne Theatre & Opera House in Newcastle, the Grand Theatre & Opera House and the Music Hall in Leeds – under the guidance of David Wilmore, expert in the usage of historic and modern theatre infrastructure at Theatresearch. On this occasion, representatives from the Flemish Ministry for Cultural Heritage, the Flemish Agency for Cultural Heritage, the City of Antwerp and Toneelhuis explored the possibilities for restoring and reusing the historic machinery in a contemporary context. This working visit also contributed significantly towards raising wider awareness about the uniqueness of the Bourla machinery.

Meanwhile, at the beginning of April 2015, Toneelhuis, on behalf of the City of Antwerp, continued their procedure and launched a call for candidates interested in presenting a masterplan and a Management Plan for the restoration and renovation of the Bourla theatre.

According to the guidelines of the call for candidates: “The objective of this project is to create a theatre that, in accordance with the existing safety norms and labour conditions, offers suitable conditions for present-day receiving and producing theatres with similar domestic and international interests, albeit within the contours of the existing volume and respecting cultural heritage values. As a consequence, an important challenge of the project is to create a balance between all the parameters and the cultural heritage value of the Bourla theatre. The project may include a complete restoration and renovation of the Bourla theatre which is to be seen as combination of restoration, renovation and renewal of the Bourla theatre in an integrated approach, allowing for all possible parameters. Toneelhuis designed ‘a plan of needs’ which gives an overview of the requirements of a present-day receiving and producing theatre.”

It is clearly stated in the guidelines that all candidates should include or team up with a restoration architect/ specialist in heritage buildings.
Some 16 national and international candidates, among which are renowned architecture firms, submitted valid applications by the end of May. The assessment by a jury will be done with the assistance of the Flemish Agency for Cultural Heritage and the City architect’s team. The outcomes will be announced on 11 September 2015. A minimum of three candidates will be selected and asked to present their masterplans for the Bourla theatre on the basis of the awarding criteria by the end of this year.

“Out of the debates no formal mutual agreement about the future of the machinery has been reached so far. Nevertheless, thanks to our presence and continuous contact at all levels, we have succeeded in defending in an open way the rehabilitation of the historic stage machinery as a crucial protected part of the listed Bourla building. Thanks to our interventions and the insights of other stakeholders, awareness about the unique value of the machinery and the inevitable limits of the renovation and modernisation of historic equipment has grown,” stated Piet Jaspaert, Vice-President of Europa Nostra, who has chaired the missions and conducted talks at all levels.

“As soon as the candidates to develop masterplans for the Bourla theatre are selected, Europa Nostra and its partners stand ready to share with them our considerations regarding the restoration, renovation and reuse of the historic machinery. We are looking forward to contributing to a sustainable action plan which takes into consideration the objectives of all the main stakeholders in the best possible way,” affirmed Piet Jaspaert.

Europa Nostra and the European Investment Bank Institute will announce in the coming weeks the technical and financial report for the synagogue in Subotica in Serbia. The action plans for the other heritage sites listed for ‘The 7 Most Endangered’ 2014 have already been unveiled: the neighbourhoods of Dolcho and Apozari in Kastoria in Greece (6 July), the Citadel of Alessandria in Italy (3 July), the carillons of the Mafra National Palace in Portugal (6 March), and the wooden churches in Southern Transylvania and Northern Oltenia in Romania (5 March). A working meeting about the Colour Row Settlement in Russia took place in The Hague on 29 May 2015.