Europa Nostra, the leading European heritage organisation, and the European Investment Bank Institute announced today an action plan to restore the carillons of the Mafra National Palace in Portugal, listed among ‘The 7 Most Endangered’ monuments and heritage assets in Europe in 2014, following a nomination by the national cultural association Centro Nacional de Cultura. 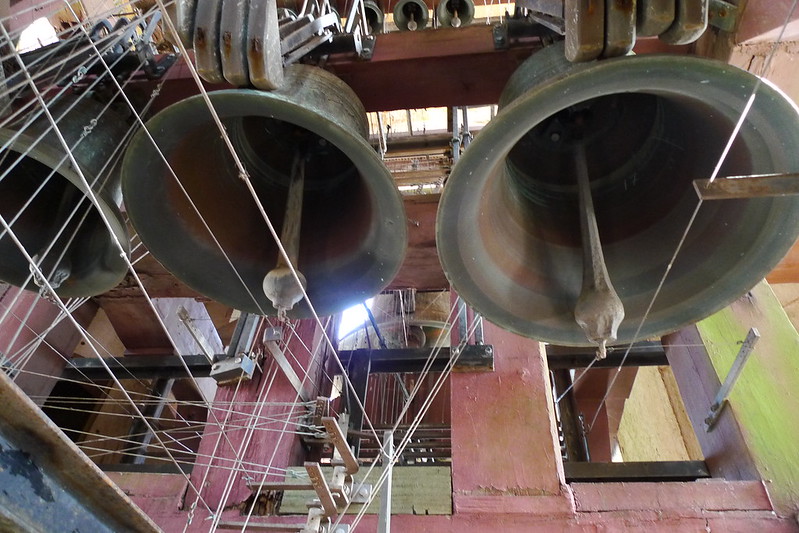 In their technical and financial report, the independent experts highlight that this conservation project is “a very worthwhile and needed initiative” which “merits strong support and should proceed”.

The programme, which includes the restoration of the 18th-century carillons and associated bells and clocks in the two towers of the Mafra Basilica, has a total cost of 2.5 million euros. Taking an optimistic view and assuming available finance, the conservation work could be carried out from the end of 2015 to mid-2017, in time for the 300th anniversary of the start of the construction of the Palace, considered a key work of the Baroque in Portugal.

“This is a relatively modest investment which could have a real impact on enhancing interest in the Mafra National Palace complex as a cultural heritage destination particularly in reestablishing its campanological credentials. It will bring the bells back into use and properly secure them allowing their potential to be realised. It is thus considered to be a very worthwhile and needed initiative”, reads the report led by Peter Bond, Technical Consultant from the European Investment Bank Institute.

The 50-metre high towers of the Basilica feature a unique set of 120 cast bronze bells, divided into carillon, liturgical and clock bells. The programme is to repair and bring as many bells as possible back into service.

The 103 carillon bells will be restored. Most will be lowered to the ground and stored or moved to the repair shop, but some may be able to be treated in situ. The south tower carillon will be fully operational and it is proposed that it should be retuned. The north tower carillon – which has never been altered and therefore provides a rare example of the sound of bell-performance in its original tuning condition – will be restored, but it should not be retuned; rather, it should be kept as a museum piece. The instrument in the south tower will be completely restored, whereas that in the north tower will be partially rehabilitated. The large liturgical bells will be properly secured and stabilised. Ten of the eleven bells are cracked and will not be restored; therefore, only one will ring. The 12-tonne clock bells will also be correctly secured and stabilised. Only one of the six bells is cracked; hence, five are able to sound. The carillon equipment and the clock mechanisms will be brought back into operation with repairs as necessary and the connections to the carillon and clock bells will be reestablished.

According to the report, other associated works to be carried out are: the repair and reinforcement of the wooden structural frames which support the carillons and liturgical bells; the restoration of the stone structure exterior of the towers with repointing; the provision of a drainage system to reduce the humidity at level three of the south tower; and the installation of new electrical systems for lighting and heating.

The main technical challenge is how to carry out the works in the areas where the heavy bells are being supported and where repairs are required to the bell fastenings and the structural timber frame. “These working methods are primarily the responsibility of the works’ contractor but need to be overseen and assisted by the promoter to reduce the contract risk and the impact on costs, both at the bid and completion stages. Further pre-contract work on investigating the scope of the problem relating to the structural timber would seem worthwhile to clarify this issue, thus reducing the risk for the bidders to the benefit of the client”, it is stressed.

Other key recommendations are: continuing to use independent experts to advise on the structural and musicology aspects throughout the programme; investigating what is required to retune the south tower bells and how to optimise the restoration; and setting up a regular monitoring programme and a maintenance schedule to ensure that the bells are kept in good condition henceforth.
According to the report, financing should be sought from European Union funds, such as the European Regional Development Fund (ERDF), to be supplemented by national and municipal sources.

“It is important that the national authorities work together with the local municipality and other parties to prepare a convincing dossier for grant support. The grant component cannot cover the full cost of the project (probably about 50%) and so some other funding is required”, it is noted. “The Mafra Municipality might be able to pre-finance some of the project preparation phases. Efforts to tap private funds or institutions such as the Calouste Gulbenkian Foundation should be explored. Finally, the European Investment Bank might be a potential source of loan funding”, it is added.

Current visitors to the Palace complex exceed 250,000 per year and this number should increase post project. Carillon concerts will complement the main musical attraction of the Basilica, the six pipe organs concerts, which attract specialists and enthusiasts from afar. It is planned to move the Museum of Music from Lisbon thus making Mafra the principal musical centre of the country.

The action plan was formulated on the basis of previous studies made by specialists in musicology and civil engineering as well as the outcomes of the three-day mission undertaken by heritage and financial experts from Europa Nostra and the European Investment Bank Institute to Mafra and Lisbon in October 2014. On this occasion, the European delegates participated in a technical visit to the Palace and took part in working meetings with local, regional and national stakeholders.

Europa Nostra and the European Investment Bank Institute will announce in the coming weeks the technical and financial actions plans for other heritage sites listed for ‘The 7 Most Endangered’ 2014, namely the historic stage machinery of the Bourla theatre in Antwerp in Belgium, the neighbourhoods of Dolcho and Apozari in Kastoria in Greece, the citadel of Alessandria in Italy and the synagogue in Subotica in Serbia. The action plan for the wooden churches in Southern Transylvania and Northern Oltenia in Romania was announced on 5 March. The mission to the Colour Row Settlement in Chernyakhovsk in Russia is expected to take place later in the year.