On 16 May, the French President Emmanuel Macron hosted a ceremony at the Elysée Palace to officially mark the launch of the European Music Centre based in Bougival, France. A delegation of Europa Nostra composed of Sneska Quaedvlieg-Mihailovic, Secretary General, and Laurent Lévi-Strauss, Board member, had the honour to attend the event and hand a copy of the freshly printed Heritage in Action magazine “Europe Special” to President Macron. He was particularly pleased to browse through this fascinating publication dedicated to the European Year of Cultural Heritage 2018, in which he appears four times.

It was against the backdrop of an air from Bach performed by renowned cello musician Marc Coppey in the Salon d’Honneur of the Elysée Palace that the European Music Centre founded and led by Jorge Chaminé reached a new milestone. All partners and supporters of the project gathered to kick start, in the presence and with the personal support of President Macron, this new European cultural project based in Bougival near Paris. A symbol of intense musical life and heritage in the heart of Europe, a bridge between music, the arts and other related disciplines, but also a place for meetings and sharing, a centre for nurturing and promoting humanistic values which are at the basis of the European project. This unique learning environment for the teaching of young musicians at the start of their careers will find shelter in the small historic town of Bougival, specifically in the House of George Bizet, the Villa of Pauline Viardot, and the Datcha of Ivan Tourgueniev and the still to be built auditorium and “Espace Carmen”.

Since 2016, Europa Nostra and its President Maestro Plácido Domingo have given their high patronage to the crowdfunding campaign for restoring these heritage sites for the use by the future European Music Centre. In June 2016, Maestro Domingo, expressed his profound emotion during his visit to Bougival as he was witnessing the state of disrepair of those important sites where the “Europe of arts and culture” was born.

In 2018, the Villa Viardot was listed among the iconic heritage sites in danger in the framework of the special mission that was granted by the French President to the renowned journalist Stéphane Bern. As such, its restoration will benefit from the funds raised by the very first Heritage Lottery (Loto du Patrimoine), organised in September 2018 during the European Heritage Days in France. This same weekend, Emmanuel Macron, accompanied by his wife Mrs. Brigitte Macron, paid a special visit to the Villa Viardot in Bougival. On this occasion, the “Fondation du patrimoine” and “Française des Jeux” presented a cheque of €500,000 to the Mayor of Bougival for the restoration of the Villa Viardot, which will be launched at the end of October 2019 during the European Cultural Heritage Summit taking place in Paris, in the presence of Plácido Domingo, President of Europa Nostra. 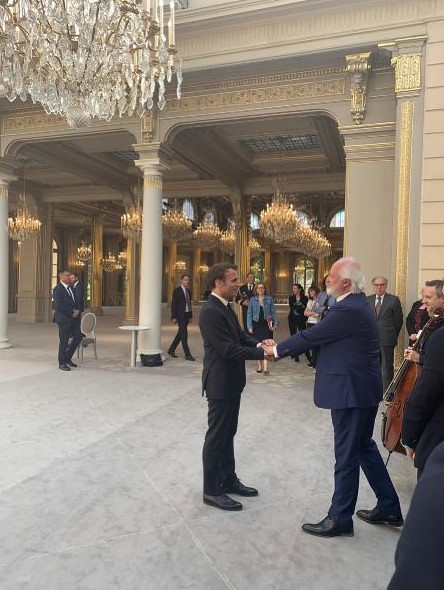