Industrial Heritage Visit to the Menier Chocolate Factory at Noisiel

Organised by the Industrial and Engineering Heritage Committee of Europa Nostra
Built to dazzle its visitors, the Menier chocolate factory is one of France’s most remarkable industrial heritage sites, featuring on the country’s tentative list for world heritage inscription. Its origins go back to the 1820s when Jean-Antoine Brutus Menier, a Paris manufacturer of pharmaceutical products, acquired a mill on the river Marne, at Noisiel, using its water power grind his various vegetal and mineral raw materials. Under the direction of his son, Emile-Justin, the firm concentrated on one of their most successful products, chocolate, now sold for everyday consumption by grocers as well as chemists. During the 1860s, the original site was considerably enlarged under the direction of the architect Jules Saulnier, who, in 1871, designed a remarkable new mill building for grinding the cacao seeds. This was one of the earliest metal-framed buildings in the world, its framework left visible with spectacularly colourful decorative brick in-fill. Under the third generation of the Menier dynasty, the factory was further enlarged in 1906 with more remarkable buildings, designed this time by Stephen Sauvestre (architect of the Eiffel tower) and making pioneering used of fretted concrete. 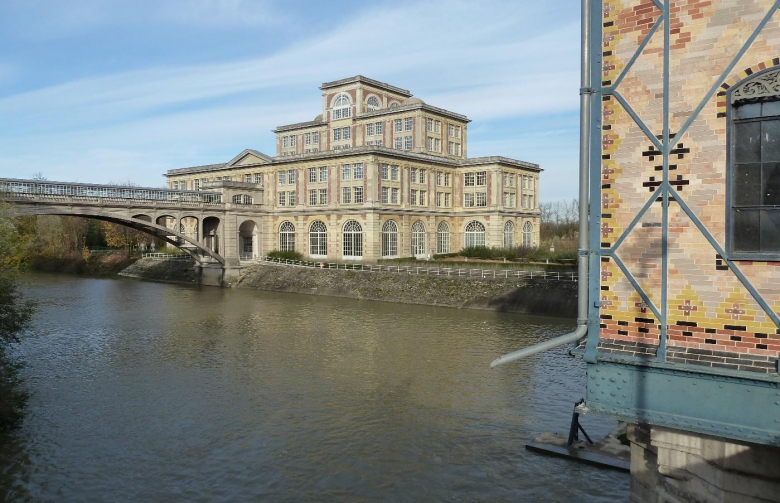 The factory ceased its production of chocolate bars in 1990. The buildings, protected as historic monuments, were acquired by Nestlé France, who commissioned the architectural firm of Reichen & Robert to convert the ensemble into their head offices. The exemplary restoration of the site received a Europa Nostra Medal in 1998. The visit to Noisiel also comprises the cité ouvrière, the workers’ housing built from 1874 to 1911 and including a town hall, a primary school, cooperative shops a meeting room and a refectory, arranged around a small square dominated by a paternal statue of Emile-Justin Menier.

Note: the visit is available for a limited number of persons (max. 50)