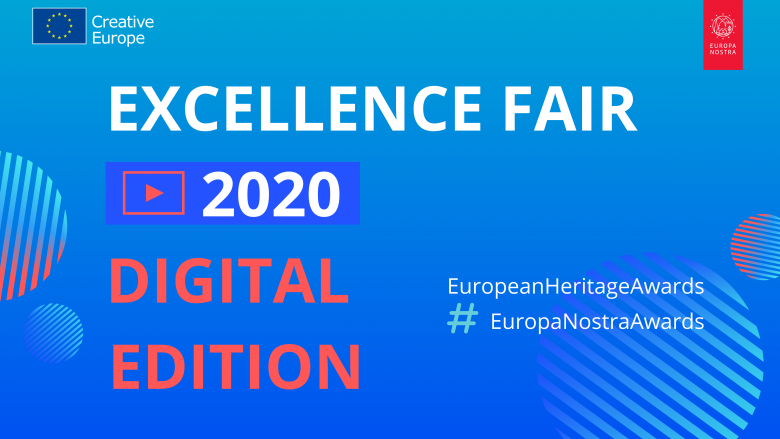 The Excellence Fair offers the laureates of the European Heritage Awards / Europa Nostra Awards an opportunity to present their award-winning initiatives to their colleagues in the heritage community and to the wider public.

This year, the Excellence Fair goes digital, with each project providing a video presentation of their work, wherein they go into further detail on the success and impact of their achievements as well as the challenges that they faced and had to overcome.

While this year’s event faces the challenge of not being able to offer face-to-face interaction with the laureates, we will be shining a spotlight on one presentation every day through our social media channels and we encourage all of Europa Nostra’s followers to share their impressions of these outstanding heritage initiatives.

To watch each video, simply click on the project title which will bring you to the video on our YouTube channel. In case you would like to learn more about each of the award winners and to read the jury’s reasons for selecting the initiative, click on ‘Read more’ at the end of each paragraph which will bring you to a short article about the project.

Don’t forget to follow us on social media for more updates on these fantastic achievements!

Rubens’ Garden Screen and Garden Pavilion, Antwerp, BELGIUM
These 400-year-old garden structures were designed and constructed by the great painter-humanist Peter Paul Rubens (1577-1640) at his home in Antwerp. This two-year project, completed in 2019, has consolidated these important pieces of heritage for future generations by researching and applying the most up-to-date stone conservation measures.
Read more

Hvar’s Arsenal, CROATIA
The Arsenal building, centrally located in the town of Hvar, the most important harbour of the island, has been carefully restored and successfully transformed into a vibrant cultural centre for visitors and the local community alike.
Read more

The Museum of Fine Arts, Budapest, HUNGARY (coming soon)
By the middle of the 20th century, the Museum of Fine Arts had undergone a number of inappropriate alterations to its layout, a direct result of changing attitudes and trends in heritage and architectural appreciation. After a three-decade-long process to correct the damage caused by these inappropriate changes, the museum has now been reopened since 2018.
Read more

Basilica of Santa Maria di Collemaggio, L’Aquila, ITALY
The return of the Basilica of Santa Maria di Collemaggio to the community of L’Aquila in December 2017 marked a watershed moment in the long process of recovery following a tragic earthquake that hit the region on 6 April 2009. Since the disaster, the Basilica has become an important place for the entire community to gather and has acted as a site of commemoration and celebration.
Read more

LocHal, Tilburg, THE NETHERLANDS
Until 2009, the LocHal, located close to the centre of Tilburg, was the main workshop of the Dutch Railways. A number of factors, including a growing appreciation for industrial heritage, led to the LocHal being preserved and transformed into the cultural centre of a new, vibrant urban area.
Read more

Subterranean Caves and Wineries of El Cotarro, province of Burgos, SPAIN
El Cotarro is a group of more than 157 underground wineries and 7 cave wineries in the small town of Moradillo de Roa in the province of Burgos, Castile-León. The conservation and rehabilitation of this important heritage has now been assured, thanks to a comprehensive programme for its care undertaken entirely by the inhabitants and municipality.
Read more

Manor Farm of Bois de Chênes, SWITZERLAND (coming soon)
Bois de Chênes is a protected natural landscape and heritage site in Genolier which is home to a manor dating from the 17th century and comprises a farm and its annexes. The restoration project paid great respect to the construction and its natural environment.
Read more

The Iron Bridge, Shropshire, UNITED KINGDOM
Though well cared for since its completion in 1779, the Iron Bridge, the first in the world to be constructed of iron and a symbol of the Industrial Revolution, has faced many challenges. Necessary interventions to preserve its original fabric to the greatest extent possible, returning the structure to its former glory and strength for the enjoyment of future generations.
Read more

Scanning for Syria, THE NETHERLANDS
Since 2011, civil war has disastrously affected Syrian people and their rich cultural heritage. The pilot project Scanning for Syria was initiated to support rescue and preservation efforts of their archaeological heritage.
Read more

Mr. Don Duco, THE NETHERLANDS
Don Duco has dedicated his life to preserving the memory of world-wide cultural heritage activities connected to the use of tobacco and, in particular, the use of pipes. He has collected, researched and displayed tobacco pipes and other smoking implements from all over the world and from many different historical periods.
Read more

Société de Lecture, Geneva, SWITZERLAND
The Société de Lecture (The Reading Society) in Geneva’s historical centre offers its members a unique and diverse library and a wide variety of activities for all ages, including lectures, conferences, workshops and storytelling. The Société de Lecture’s mansion, a fine example of 18th-century Genevan architecture, is maintained by the Fondation Société de Lecture. It continuously oversees the conservation and, when necessary, the meticulous restoration of this historic building
Read more

Arolsen Archives Online, GERMANY
The Arolsen Archives are an international centre for the study of Nazi persecution which houses the world’s most comprehensive archive on the victims and survivors of Nazism. This online portal has provided users with easy online access to the documents for the very first time. A digital aid, the e-Guide, helps users understand the archival records.
Read more

The Secret Life of a Palace, Gödöllo, HUNGARY
This project raised awareness of the lesser known history of the Royal Palace in the town of Gödöllo. This ambitious educational and awareness-raising project closely involved a group of young students aged 12 to 18-years-old. They contributed to the development of a concept, to the researching of the history of the Palace and to the design, building and marketing of an exhibition.
Read more

Auschwitz. Not long ago. Not far away., POLAND/SPAIN
This exhibition is expected to teach more than 7 million visitors about the complicated history of the largest German Nazi concentration and extermination camp – Auschwitz-Birkenau – as well as how and why the Holocaust happened. The exhibits, many of which are shown for the first time, illustrate the story of Auschwitz.
Read more

The Ambulance for Monuments, ROMANIA
The Ambulance for Monuments project was launched in 2016 to rescue hundreds of heritage-listed buildings in Romania through a large network of active heritage organisations. These emergency interventions are carried out by experts, students and trained craftsmen on a voluntary basis with the support of local communities and authorities.
Read more

SARAT – Safeguarding Archaeological Assets of Turkey, TURKEY
Safeguarding Archaeological Assets of Turkey (SARAT) is an educational and awareness-raising project that has had a considerable impact on the protection and appreciation of Turkey’s rich, diverse, and at times threatened, archaeological heritage. SARAT carried out four interconnected programmes to strengthen the skills and increase knowledge and awareness of heritage amongst heritage professionals, heritage-related people and the general public.
Read more