One year after the European Year of Cultural Heritage had officially kicked off, it was time to gather in Vienna, Austria, for the official closing conference of this historic European initiative.The Conference was hosted by the Austrian Federal Chancellery on 6-7 December.

On the first day, heritage stakeholders, professionals and volunteers, and above all interested citizens could explore 12 different heritage projects and sites by taking one out of five discovery tours organised in the historic city centre of Vienna under the motto “#EuropeForCulture – Discover your Heritage”. In the evening, a grand networking event was organised at the Imperial Palace, time for celebration and joyful dancing!

Unforgettable evening at the Imperial Palace in #Vienna with so many colleagues & friends from all over Europe who made our European Year such a success! Many thanks to our Austrian hosts! #SharingHeritage #SharingDance @EU2018AT @europe_creative @Kulturerbejahr @europanostra pic.twitter.com/hObQM3tnWj

The second day was dedicated to an expert-level conference. The aim was to present the wide variety of initiatives and activities launched during the European Year as well as to consider what is the legacy of the year and how heritage initiatives could be further developed and integrated into broader cultural policies.

Gernot Blümel, Austrian Federal Minister for EU, Arts, Culture and Media, together with Tibor Navracsics, European Commissioner for Education, Culture, Youth and Sport, and Petra Kammerevert MEP, Chair of the European Parliament’s Committee on Culture and Education, gave a joint press conference and took part in the political session that opened the Vienna Conference. Commissioner Navracsics launched a major European Commission document, the European Framework for Action on Cultural Heritage, as a means to build on the momentum of the European Year and to ensure its legacy over the coming years. Commissioner Navracsics also recalled a very fond personal memory of his contribution to Europa Nostra’s #Ode2Joy Challenge.

In Vienna, @TNavracsicsEU shared his most moving personal memory of the European Year: “Singing #Ode2Joy with my friends on main square of my home town #Veszprem to contribute to the challenge launched by @europanostra”. Thanks Tibor, EU Commissioners are indeed human beings! 🤩 pic.twitter.com/b0n5sKAcDs

In the course of the day, expert speakers discussed topics like youth involvement, heritage skills and knowledge transfer, sustainable development and tourism as well as digitisation in a series of parallel sessions.

During the closing session of the conference, Uwe Koch from the German Cultural Heritage Committee (DNK) and Sneška Quaedvlieg-Mihailović from Europa Nostra had the opportunity to hand over the symbolic number of 2,018 signatures collected so far during the campaign for the Berlin Call to Action “Cultural Heritage for the Future of Europe” to Michel Magnier, Director for Culture and Creativity at the European Commission. 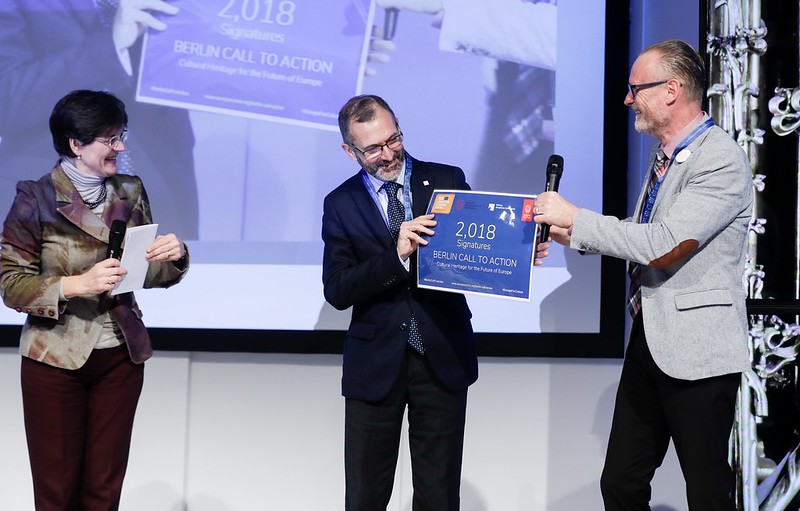 On the occasion of the conference, two outstanding eTwinning projects were awarded for their innovative approach with the eTwinning Award for Cultural Heritage. Two heritage projects were awarded for their innovative approach: the project ‘Monumental Europe’, allowing students to explore the most important monuments and sites in Greece, Spain, Italy, Poland and France (age group 6-12 years) and the project ‘MATH 3.0 Amazing trip through history’ involving pupils from France, Poland and Iceland, who used the history of mathematics to gain a better understanding of different mathematical concepts. Several educational projects had already been celebrated and awarded with the eTwinning European Awards at the annual eTwinning conference held in Warsaw on 25-27 October, to which Europa Nostra contributed with a keynote speech. Europa Nostra’s Secretary General congratulated the winning projects: ‘These two outstanding projects will hopefully inspire many future eTwinning projects delving into Europe’s shared heritage and help create a better understanding of our common past for a peaceful present and brighter future together in Europe.’