The Food is Culture project – a multimedia artwork sharing the stories and traditions behind European food heritage – was officially launched on 23 September in Turin, Italy, on the occasion of Terra Madre Salone del Gusto, at the PAV – Experimental Centre for Contemporary Art.  Europa Nostra (the leading heritage organisation in Europe) figures among the partners of this special cooperation project during the European Year of Cultural Heritage 2018 led by Slow Food – in collaboration with the Kinookus association (Croatia), Nova Iskra Creative Hub (Serbia), and Transpond AB (Sweden). During a public event attended by around 100 participants, the consortium was proud to present – through a video – the first phase of this multimedia project dedicated to European food culture that will travel throughout Europe in the upcoming months.

The actual creation of the multimedia work, which combines the contribution of several artists, will begin its journey in early 2019, and will be exhibited in cultural spaces in Sweden, Serbia, Croatia and Italy. The work will travel to Brussels to raise awareness among EU policy makers of the importance and value of gastronomic heritage. In June 2020, at the Migranti Film Festival in Pollenzo, a final version of the work, with the best results of the project’s activities will be presented.

During the launch conference, Piero Gilardi, founder of PAV, explained “Unlike many others, this project is successful because it sets in motion a communicative ecology of desire. Normally the speeches are always in the perspective of renunciation, always inspired by Latouche’s concept of happy degrowth. But the dominant opinion among the public does not follow this line: we need positivity. And we artists try to bring this out: rebuilding our economic model means improving life, relationships between people. All the experiences of Slow Food are experiences of active resilience that make us believe in a better future.”

The Food is Culture project

This cooperation project aims to foster a sense of belonging to Europe by appreciating the vast food heritage that characterizes the continent, and knowing how to enhance and protect the cultural uniqueness that it represents. In addition to the multimedia work, the main activities of the project include a call to action addressed to chefs and school students, the creation of a human library with stories of migrants, and an appeal to European and national institutions to emphasize the need to put the preservation of the European gastronomic cultural heritage at the top of their political agendas. Using its wide network across Europe and policy expertise, Europa Nostra will lead this latter activity and will be closely involved in the entire project.

“Identity today is a very problematic concept, and so is food. Both contain very different aspects, which often intertwine and characterize the uniqueness of each culture. The video we presented contains, in particular, the identity that comes from our origins and remains, even in the most difficult moments, the foundation and anchor of salvation for our future.” explained Ivo Kara-Pešic of the Kinookus association.

Food is a fundamental component of culture, but the relationship between them today is sometimes very mystified and complex.

“A beautiful story moves everything, moves you inside” declared Lorenzo Vignolo, director of the video. “And food and culture have millions of fascinating stories to tell and to weave, as in this first work that aims to convey, among other things, the emotion of rediscovering their origins as well as the value of food. It is not easy, but my role is an extraordinary one, because it allows you to meet many people and to harmonize the interweaving of different cultures, traditions and identities.” 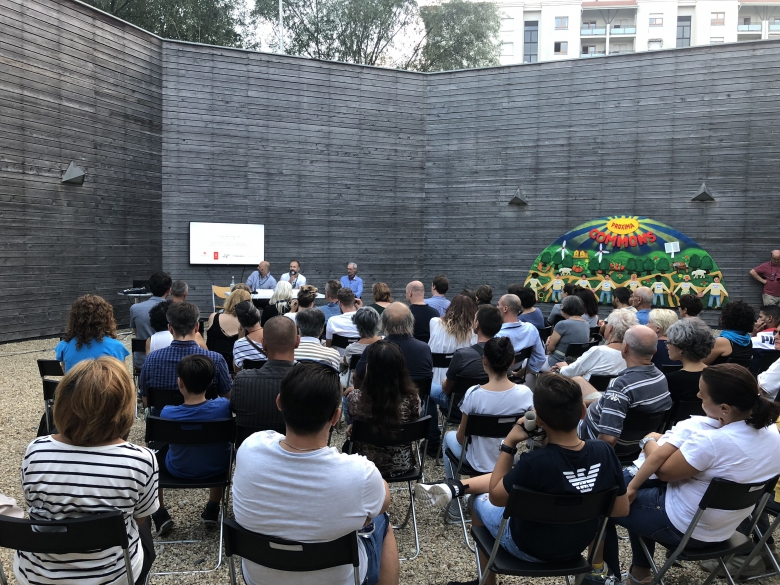 Launch of the Food is Culture project at PAV in Turin, Italy. Photo: Europa Nostra

The Ark of Taste and the World’s Food Heritage

Slow Food has been working for some time to safeguard and enhance the gastronomic heritage of the entire world. In particular, the Ark of Taste is the main answer to this need: the project travels the world and collects the products that belong to local cultures, history, and traditions of the entire planet. It signals the existence of these products, warns of the risk of their disappearance, and invites everyone to do something to protect them. It is not just a question of gastronomic value: they are part of a culture, made up of territory, traditional knowledge and techniques. Therefore, the existing content of the Ark of Taste will form an integral part of the Food is Culture’s multimedia artwork.

Piero Sardo, President of the Slow Food Foundation for Biodiversity, concluded: “The intangible cultural heritage of food in Europe is an enormous resource, but still too often underestimated. It is widely used to promote tourism, but almost never treated as a resource, that can strengthen the sense of belonging to a common space of social integration. There is still much to be done to bring the world of food closer to the world of culture, but there must be a growing awareness that they are two worlds that are interchangeable and not incompatible as they want us to believe. We must anchor our culture at the roots of our tradition, of our agriculture. To save the endangered planet we must start again from the earth, and in particular from food. We are eating our planet. We have an important and urgent job to do”.

Join the initiative “Ringing the Bells for Peace & Heritage” across Europe