The French President Emmanuel Macron and his wife Brigitte Macron hosted an exceptional meeting with Europa Nostra’s President Maestro Plácido Domingo and a select group of guests at the Élysée Palace in Paris on 2 March. It was a most inspiring gathering dedicated to promoting the values of a Europe of culture and cultural heritage. The insightful discussions revolved around the European Year of Cultural Heritage 2018, the European Cultural Heritage Summit in Berlin on 18-24 June – which is co-organised by Europa Nostra, the German Cultural Heritage Committee and the Prussian Cultural Heritage Foundation -, and the ongoing campaign to rehabilitate the outstanding heritage of the historic town of Bougival near Paris, which received the patronage of Europa Nostra and its President.

With our President @PlacidoDomingo we thank warmly French President @EmmanuelMacron & #BrigitteMacron for this inspiring encounter at @Elysee dedicated to promoting together the values of the Europe of #Culture & #CulturalHeritage #EuropeForCulture #EYCH2018 #SharingHeritage pic.twitter.com/dHuLVCj7nN

Plácido Domingo was accompanied by Europa Nostra’s Executive President Denis de Kergorlay, Board Member Hermann Parzinger, who is also the President of the Prussian Cultural Heritage Foundation based in Berlin, and Secretary General Sneška Quaedvlieg-Mihailović. Also in attendance at the meeting were Jorge Chaminé, President of the Centre Européen de Musique (CEM), who is the driving force behind the campaign for the revitalisation of the Villa Viardot and the House of Bizet in Bougival, the legendary pianist Alfred Brendel and his wife Maria Majno, who are both strong supporters of the CEM, as well as the renowned French journalist Stéphane Bern, who has been entrusted by President Macron with a special task of setting up a priority list of endangered heritage in France, and Sylvain Fort, member of President Macron’s Cabinet.

During this extraordinary two-hour meeting, President Macron demonstrated his deep commitment to giving culture and education a more central place within the European project. President Macron emphasised that we need to raise the knowledge, understanding and awareness of the European dimension of our culture and cultural heritage among Europe’s citizens through various forms of education. The French President also reaffirmed that we need to communicate about Europe not only in an institutional way but also in a way that stimulates an emotional link between citizens and Europe. President Macron also voiced his keen interest in the European cultural project related to Bougival. 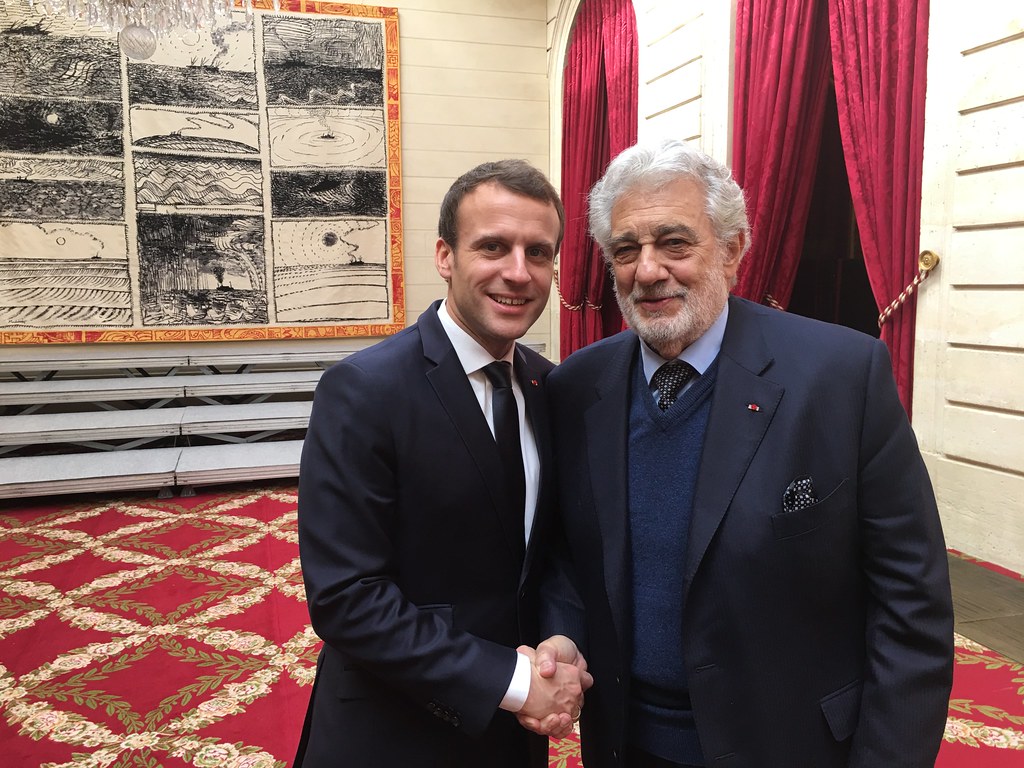 The President of Europa Nostra congratulated President Macron for his unprecedented political vision and commitment to the promotion of a “Europe of Culture and Cultural Heritage” as a prerequisite for any revival of the European project. Europa Nostra representatives also highlighted that Europa Nostra and our wide civil society movement stand ready to support President’s Macron initiatives in favour of education and culture at European level.

“We have all been impressed by the very warm welcome and keen interest of President Macron and his wife Brigitte in the European Year of Cultural Heritage, our Summit in Berlin as well as the Bougival campaign. We are grateful for their genuine willingness to offer us their full support,” stated Plácido Domingo, after this exceptional meeting in Paris.