From 6-9 November, experts from Europa Nostra and the European Investment Bank Institute were in Georgia for a mission related to the David Gareji Monasteries and Hermitage. The site was listed among the 7 Most Endangered heritage sites in Europe in 2018, during the European Year of Cultural Heritage, following a nomination made by the Georgian Arts and Culture Centre. 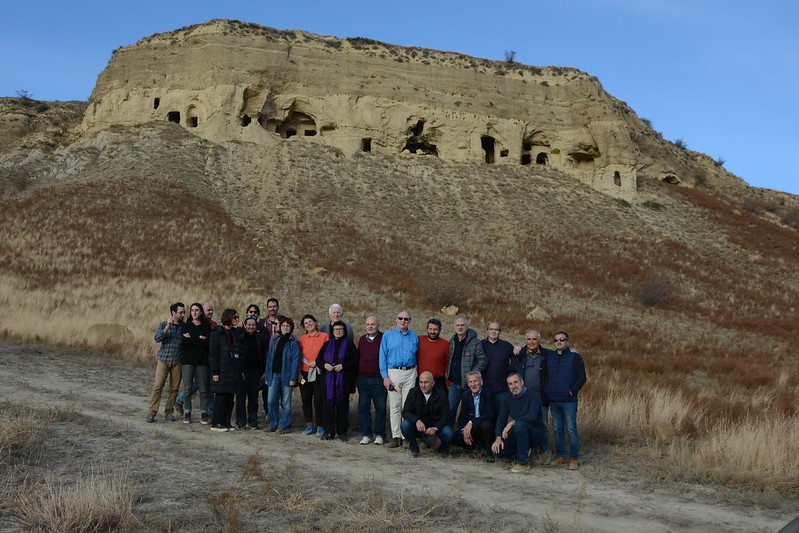 The European delegation of heritage and financial specialists met with local, national and transnational authorities, representatives of civil society, professionals and other stakeholders, with the aim of mobilising efforts towards saving this masterpiece of Georgian and European culture. The key findings and recommendations of the mission will be published in a report at the beginning of 2019. 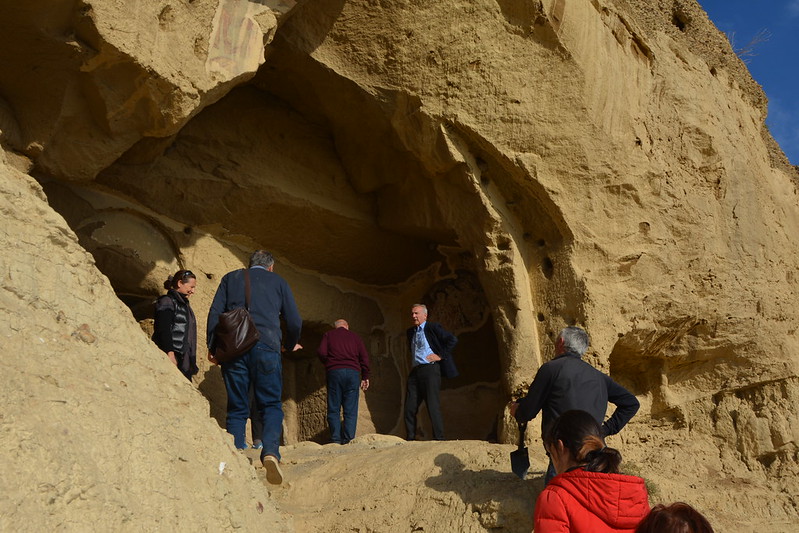 The European experts who undertook the mission to the David Gareji Monasteries and Hermitage were Mr. Piet Jaspaert, Vice-President of Europa Nostra; Mr. Campbell Thomson, Technical and Economic Adviser contracted by the European Investment Bank Institute; and Mrs. Gaianè Casnati, Conservator-Architect, Council Member of Europa Nostra and Member of the Advisory Panel of the 7 Most Endangered programme.

The delegation was led by Mrs. Maka Dvalishvili, Head of the Georgian Arts and Culture Centre, together with Mr. Nikoloz Antidze, Head of the National Agency for the Preservation of the Cultural Heritage of Georgia.

The meeting at the National Agency for the Preservation of the Cultural Heritage of Georgia focused on the main challenges and threats posed to the David Gareji Monastery complex as well as the possible ways of overcoming the difficulties.

The delegation met with professionals, experts, scientists, academics, geologists and restorers who have worked on various cultural and natural issues related to the David Gareji Monasteries and Hermitage, including the team that prepared the report for the World Bank in 2008. The scholars presented and discussed historical, cultural, social, geographic and preservation issues.

At the meeting with Mr. Carlo Natale, Deputy Head of the European Union Delegation in Georgia, the main topics discussed were the EU delegation’s involvement in the safeguarding of the endangered sites, the 7 Most Endangered programme, which is run by Europa Nostra in partnership with the European Investment Bank Institute, and the Berlin Call to Action: “Cultural heritage for the Future of Europe”.

The delegates visited three monasteries of the David Gareji complex: St. John the Baptist (Natlismtsemeli), St. David’s Lavra, and Udabno. Dr. Zaza Skhirtladze gave a guided tour of the sites and explained all cultural and managerial issues related to each monastery. The delegation also met with ecclesiastical representatives of the Lavra Monastery.

At the end of the day, the folk group of the Village Udabno performed traditional Georgian songs and dances.

The delegates visited two monasteries of the David Gareji complex: St. Dodo’s Rka and Sabereebi. Mr. Nikoloz Antidze, Head of the National Agency for the Preservation of the Cultural Heritage of Georgia, and other representatives of the National Agency joined the mission in Sabereebi in order to discuss the current challenges onsite and held discussions on an appropriate methodology and strategy for the safeguarding of the David Gareji Monasteries and Hermitage.

The onsite visits were accompanied by Italian experts and geologists leaded by Dr. Geol. Claudio Margottini, Professor of Engineering Geology at the Florence University, who is conducting the geological investigations in cooperation with the Ilia State University.

The day concluded with a meeting with the Mayor of Sagarejo, Mr. George Erbotsonashvili, during which the social and economic conditions of the community of the region were discussed.

The delegation met with the Deputy Minister of Education, Science, Culture and Sports, Mr. Mikhael Giorgadze, and discussed the strategy and possible steps towards the safeguarding of the David Gareji complex. The Minister also expressed his strong support for and signed the Berlin Call to Action.

The meeting with World Bank Regional Director for the South Caucasus, Ms. Mercy Tembon, and the Head of the Regional Development projects, Mr. Tengo Gogotishvili, concentrated on ways to strengthen the cooperation with the World Bank for safeguarding the David Gareji complex.

Finally, the concluding session of the mission took place at the National Agency for the Preservation of the Cultural Heritage of Georgia, with the participation of all relevant stakeholders. The experts from Europa Nostra and the European Investment Bank Institute presented the first findings of the mission and outlined the necessary follow-up steps.