On 7 September, a Local Award Ceremony was held in Weimar (Germany) to celebrate the exemplary restoration of the Haus Am Horn, winner of a European Heritage Award / Europa Nostra Award in 2021. The ceremony gathered around 40 guests from the fields of politics, culture and architecture, including, among others, the President of the Bauhaus University Weimar, Prof. Winfried Speitkamp, and the Cultural Director of the city of Weimar, Julia Miehe. 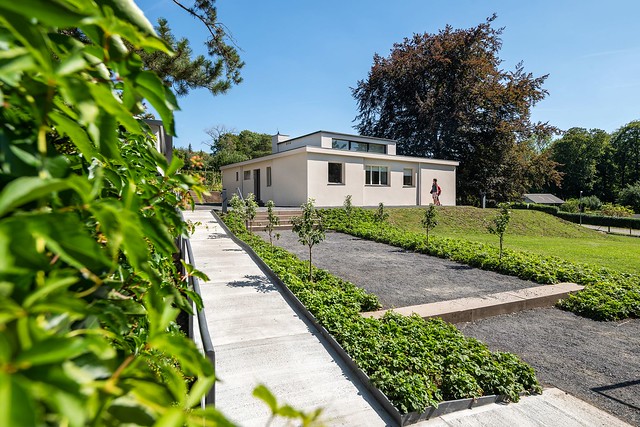 After a musical introduction by the “neue bauhauskapelle”, Dr. Ulrike Lorenz, President of the Classic Foundation Weimar, welcomed all of the participants to the event. Marcos Ros Sampere, Head of New European Bauhaus Friendship Circle at the European Parliament, and Jörg Wojahn, Head of the European Commission Representation in Germany, each then spoke of the Award and its crucial importance.

Hermann Parzinger, Executive President of Europa Nostra, congratulated the “heritage heroes” and each of the professionals responsible for the restoration of the Haus Am Horn, an iconic expression of the Bauhaus architecture and lifestyle. The project was regarded as highly symbolic, coming about at a moment when the European Union is promoting the New European Bauhaus initiative, aimed at building a more beautiful, sustainable and inclusive future.

After the unveiling of the bronze award plaque at the Haus Am Horn, the participants were brought on guided tours through the house and the garden to view the high-quality work carried out in the house and to understand the efforts of the conservators to restore the original aesthetic appearance of the house.