On the morning of 23 May 2016 at the College of Architects of Madrid, H.M. Queen Letizia of Spain, Honorary President of Hispania Nostra, opened a photographic exhibition about the Spanish winners of the European Heritage Awards since its creation in 1978, which was organised by Hispania Nostra to mark its 40th anniversary. After being introduced to high-level representatives from Europa Nostra, the European Commission and other key partners of the European Heritage Congress in Madrid, Queen Letizia was given a guided tour through the exhibition by Hispania Nostra’s President Araceli Pereda Alonso. On this occasion, she was presented with the first copy of the Heritage in Action magazine: Spain Special produced by Europa Nostra with the support of the EU Creative Europe programme. Queen Letizia then participated in a festive reception which was open to all Congress delegates. 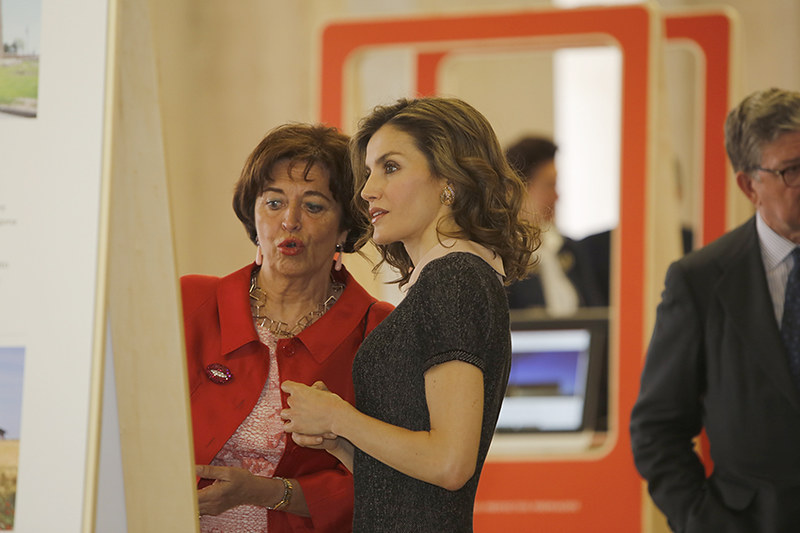 The photo exhibition took us on a fantastic journey across Spain over nearly 40 years, showing the best and most inspiring examples in conservation, research, dedicated service to heritage, and education, training and awareness-raising. A total of 92 remarkable heritage projects were presented with Europa Nostra Awards between 1978 and 2001, while 58 won the European Union Prize for Cultural Heritage / Europa Nostra Awards between 2002 and 2016. Of these, seven projects received a Grand Prix and a monetary award of €10,000 each between 2008 and 2015, namely: in the Dedicated Service category, Dr. Glenn Murray (2009); in the Conservation category, the Roman Theatre of Cartagena (2010), the Preindustrial Buildings in Ademuz/Sesga in Valencia (2011), the Number 2 Blast Furnace in Valencia (2012), the Roman Theatre of Medellin (2013), the Cooperative Wineries Programme in Barcelona (2014) and the Salt Valley of Añana in the Basque Country (2015).

“Spain has received more awards than Italy. This is partially explained by the quality of the projects submitted for an Award, the remarkable work carried out by Hispania Nostra over the last 40 years and the important role played by the Queen in raising the visibility of these heritage achievements,” stated Denis de Kergorlay, Executive President of Europa Nostra.

During the vernissage, Queen Letizia received the first copy of the Heritage in Action magazine entirely dedicated to Spain, the host country of the European Heritage Congress 2016, from Europa Nostra’s Secretary General Sneška Quaedvlieg-Mihailovic, who was accompanied by the editor of the publication Wolter Braamhorst. This edition features many examples of community based-projects, some of which are winners of the European Heritage Award winners.

The photo exhibition, which is supported by the Spanish Cultural Action of the Ministry of Foreign Affairs and the Spanish Agency for International Development and Cooperation (AECID), will be shown at various cultural centres both in Spain and abroad.

The EU Prize for Cultural Heritage / Europa Nostra Award received the support of the EU Culture programme and is now supported by the EU Creative Europe programme.