On 30 May 2019, Europa Nostra contributed to the 32nd edition of the Hay Festival, the world’s largest arts, literature and ideas festival held yearly in Hay-on-Wye, a small town in Wales that is famous for its bookshops. Sneška Quaedvlieg-Mihailović, Secretary General of Europa Nostra, participated in the panel entitled ‘National identity and the idea of European unity’ to tackle, together with other heritage experts, some timely and important questions: Are local loyalties compatible with the idea of a pan-European community? How do local identities intertwine with a European one? What role can cultural heritage play as we learn to understand each other and accept diversity?

Irena Edwards, Chairman of the Czech National Trust and Joep de Roo, running the Innocastle and OpenHeritage EU-funded projects, were the other panellists on stage. The debate was moderated by Justin Albert, Director of the National Trust Wales and Trustee of the International National Trusts Organisation.

Great first experience of @hayfestival in #Wales discussing the value & relevance of cultural heritage for our multiple identities & belonging (local, national, European & global).Thanks @PeterFlorence & #JustinAlbert for invitation; I hope to be back next year! #HayFestival2019 pic.twitter.com/XYJWBCBGar 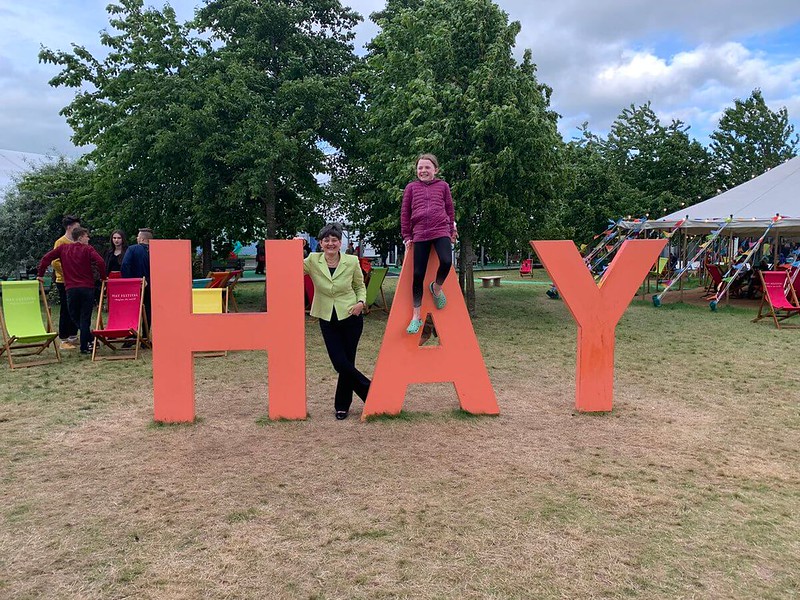 A lively conversation on the ‘multilayerdness’ of heritage

The three panellists and moderator engaged in a truly inspirational, lively and very informative discussion around cultural heritage and identity, illustrating the topic with their personal stories, professional experiences and ongoing projects. The session, which was fully booked, was attended by enthusiastic participants from all ages and backgrounds.

Speakers addressed the role of cultural heritage in creating a shared bond and a sense of belonging to a community, be it local, national or European, or all three simultaneously. Sneška Quaedvlieg-Mihailović, Secretary General of Europa Nostra, recalled how the tragic fire that devastated Notre Dame of Paris in mid-April felt like a personal loss from people all across Europe and beyond: “We all felt we were losing something. We can all cherish the local and the European – that is not a contradiction”, she said. Taking into account this ‘multilayerdness’ of heritage, she also stressed the need to learn history from multiple perspectives and not just from a national one: “History should be taught and learnt in a multi-perspective approach and in a wider European context to allow the development of a more inclusive discourse that reflects the multiple layers of our identity”, she added.

Participants highlighted ‘telling the right stories’ and ‘reaching out to the wider public’ as crucial elements to build a sense of community when developing cultural heritage-related projects. Joep de Roo illustrated the former through Innocastle, an Interreg-funded project involving four European regions and aiming, inter alia, at telling the story of our shared European identity through historic castles, manors and estates. Sneška Quaedvlieg-Mihailović recommended looking for European and global stories in local communities and in local heritage assets. This is perfectly reflected in the winners of the European Heritage Awards / Europa Nostra Awards scheme, organised jointly by Europa Nostra and the European Commission since 2002.

Irena Edwards, Chairman of the Czech National Trust raised the need to ‘capture the public’s imagination’ through cultural heritage. Indeed, storytelling can radically change the way we experience, engage with and understand cultural heritage.

Cultural heritage as a resource for social cohesion

Sneška Quaedvlieg-Mihailović closed the discussion by talking about the European Year of Cultural Heritage in 2018, which was a unique opportunity to bring our shared heritage to the fore and raise awareness of its value for social cohesion in Europe. “We can’t reduce Europe to economics – Europe also has a soul and a memory. The real Europe is about our connections to one another”, she said. She expressed hope that cultural heritage could bring communities back together in the UK and called for more investment in culture, cultural heritage and education to achieve this.

More about the Hay Festival