Home News Heritage, civic, academic and economic voices gather to reflect on the future of Venice and its Lagoon at the Venice Summit

Heritage, civic, academic and economic voices gather to reflect on the future of Venice and its Lagoon at the Venice Summit

The event “Saving Endangered Venice & its Lagoon: How to Build Back Better?” was held on 22 September at the Giorgio Cini Foundation in Venice, in the frame of the European Cultural Heritage Summit 2021. This initiative was organised by the Association of International Private Committees for the Safeguarding of Venice in collaboration with Europa Nostra and with the contribution of other Italian member organisations of Europa Nostra and local NGOs concerned. It provided a platform for heritage, civic, academic and economic voices to propose constructive, feasible and concrete solutions for a more sustainable future for Venice. It also laid the foundations for a wider European response and joint action to save Venice and its Lagoon, which Europa Nostra and the European Investment Bank Institute declared in 2016 as THE most endangered heritage site in Europe. 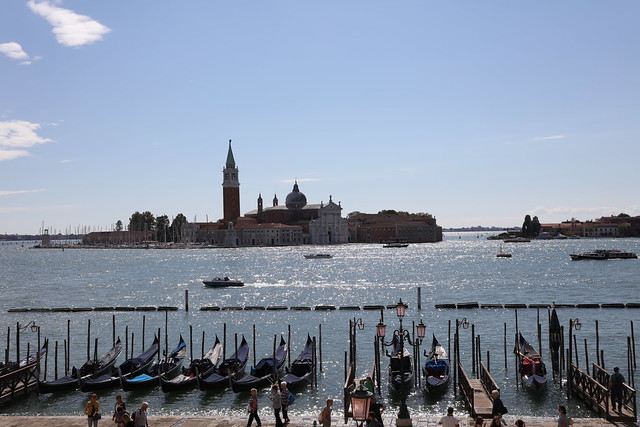 The event “Saving Endangered Venice & its Lagoon: How to Build Back Better?” was a constructive and productive dialogue between key stakeholders from the Venetian civil society and youth, representatives from Universities, economic organisations and foundations, regional and local decision-makers, as well as European and international organisations, including the Council of Europe, the European Investment Bank Institute and UNESCO. The debate was opened by representatives from the co-host organisations, namely Paola Marini, on behalf of the Association of International Private Committees for the Safeguarding of Venice, and Sneška Quaedlievig-Mihailović, on behalf of Europa Nostra. It was moderated by Pierluigi Panza, Professor of Art Critic at the Politecnico di Milano.

“Saving Endangered Venice & its Lagoon: How to Build Back Better?” will gather voices from heritage, civic, academic & economic actors to imagine, together, a more sustainable future for Venice, its lagoon and its inhabitants 🇮🇹🏦👨‍👨‍👧‍👧♻️#EuropeanHeritageSummit pic.twitter.com/Uqos3ZkZj2

In her opening remarks, Paola Marini, Chairwoman of the Association of International Private Committees for the Safeguarding of Venice, expressed the motivation of the organisers to host such an event. “The prospect – expressed by Europa Nostra within the World Heritage Committee last July 22 – that Venice may cease to be a notorious case of an endangered World Heritage Site and become a success story, moved us to organise this initiative, which I would like to define as a ‘listening’ one,” she said. 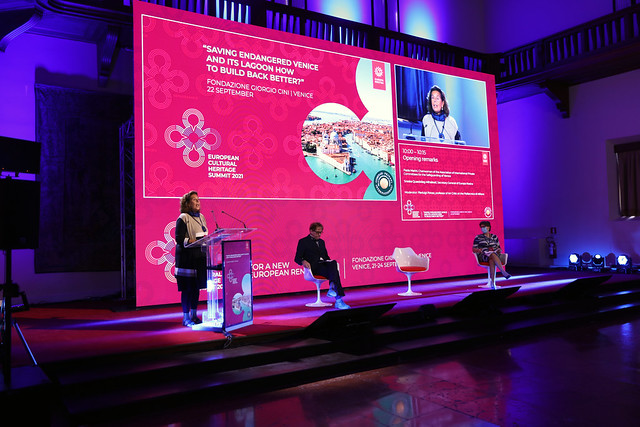 “We are convinced that the answer to the many open questions on the future of Venice can only be a coordinated and a shared one,” explained Paola Marini. “In today’s forum, we intended to give the widest possible voice to the main protagonists: civil society, in the first place, the academic world, the economic fabric, as well as administrative and political decision-makers,” she added.

Sneška Quaedlievig-Mihailović, Secretary General of Europa Nostra, then took the floor. “We have brought together today, probably for the first time, the most diverse voices, with the aim of providing a platform for discussion, reflection and exchange; but, above all, a platform for action, to intensify our efforts in providing effective responses to so many serious threats to Venice and its Lagoon. We are here today to demand once again the preservation of the integrity and authenticity of Venice and its Lagoon, and the adoption and implementation of a ‘holistic’ long-term plan for its rebirth,” she emphasised. 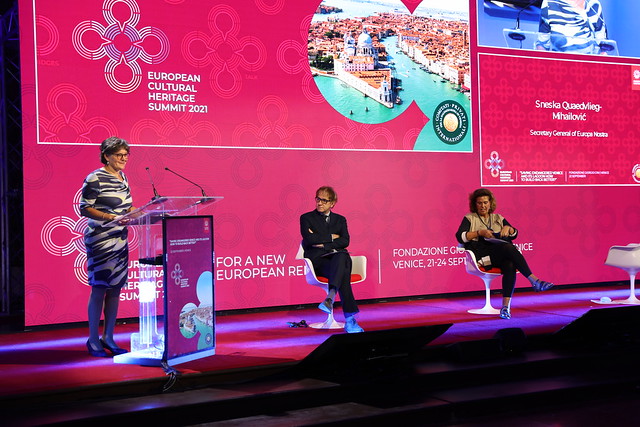 “Venice is the place that has inspired the birth of our Europa Nostra movement, and we want Venice to be the symbol of the renewal of our joint action to put culture and cultural heritage at the heart of Europe’s recovery and future. In the year where Venice celebrates its 1600th anniversary, we are full of hope and want to say that Venice has a future, if we join our forces and voices,” added Sneška Quaedlievig-Mihailović.

Seven thematic panels followed, touching on the most critical and burning issues for the safeguard and future of the World Heritage City of Venice, from an environmental, economic, social, political and cultural point of view. Among the many topics discussed during the long and rich debate were the future of the port, the transit of ships, the Mose, the problem of depopulation, the creation of new jobs, the enhancement of public and social services, the possibility of creating a special statute for the city and the regulation of tourism.

Vittorio da Mosto, on behalf of young Venetians, called for an intergenerational exchange to shape joint and sustainable solutions for Venice. “I call on the international community to support Venice, its heritage, its Lagoon and its inhabitants. Venice belongs to the whole world, not only to Italy!” he stressed.

The panel “Academic voices: proposals for a creative, innovative and sustainable Venice” brought together Caterina Carpinato, Vice Rector for the Third Mission at the Università Ca’ Foscari, Alberto Ferlenga, Rector of IUAV, and Pierpaolo Campostrini, Director of CORILA. Among the concrete proposals discussed were to invest in scientific research to find sustainable solutions for the use of Venice Lagoon and tap into the potential of innovative technologies not only to restore the city, but also to contribute to its regeneration.

Alberto Ferlenga, Rector of IUAV, stressed: “Let’s bring an essential component back to Venice; its students! If 1000 students come back to Venice, this can be a real game-changer for the social life of this city”.

The panel “The economic fabric: proposals for an economic renaissance” was composed of Gianni de Checchi, on behalf of Artigiani (Craftsmen), Claudio Scarpa, member of the Giunta di Confcommercio, Paul Atkin, from the San Cassiano Theatre, and Michele Bugliesi, President of Fondazione di Venezia. Among the interesting proposals discussed were to change Venice city’s image through culture and heritage and to reduce short-time stays through cultural tourism.

Claudio Scarpa, AVA Director, recalled the power of culture to bring Venice back to life. “70% of tourists visit Venice only for a short stay and overflow the canals. Cultural and heritage institutions have the potential to attract quality tourism back to the city,” he said.

The fourth panel brought together institutional representatives from the regional and national administrations, including Francesca Scatto from the Veneto Regional Council, Nicola Pellicani, Italian Member of the Parliament, and Emanuela Carpani, Superintendent for Archeology, Arts and Landscape in the Venice municipality. Some of the concrete proposals that emerged were to align the city’s of Venice sustainable development with the European Green Deal and to support the creation of new jobs in the historical center.

“With its challenges in terms of climate change, sustainable tourism, inclusive housing and employment creation, Venice has the potential to become a laboratory for the whole world”, said Francesca Scatto, President of the sixth committee of the Veneto Regional Council.

The next panel “Venezia Nostra: a common responsibility also for Europe and for the world” brought together Luisella Pavan-Woolfe, Director of the Council of Europe – Venice Office, Francisco de Paula Coelho, Dean of the European Investment Bank Institute, and Jyoti Hosagrahar, Deputy Director, World Heritage Center UNESCO. Among the concrete proposals discussed by panelists were to duly take into account the needs and aspirations of the local community in any development undertaken in Venice, support a coalition of policy-makers and civil society to save Venice and its Lagoon, and put forward a holistic approach which integrates the key challenges facing Venice, including heritage preservation, job creation, economic development and ecological protection.

“Venice is our common responsibility,” commented Francisco de Paula Coelho, Dean of the European Investment Bank (EIB) Institute, while reaffirming the commitment of the EIB to provide funds, but also expertise for the protection of Venice and its Lagoon, which has become a fight both for cultural heritage and climate change.

In the last panel, “Venice as a laboratory for a renewed European Urban Culture”, Paola Marini, Chairwoman of the Association of International Private Committees for the Safeguarding of Venice, and the Architect Leo Schubert presented the “Venice Appeal for a Renewed Urban Culture”, which was developed by a group of experts after substantial research, on the initiative of the Private Committees. The appeal aims to promote the preservation of historic cities and to raise awareness of the risks involved in the loss of culture and urban heritage, such as depopulation and decline of the social fabric.

In her closing remarks, Sneška Quaedlievig-Mihailović, Secretary General of Europa Nostra concluded the enriching journey by stating “We are proud that Europa Nostra could contribute as a catalyst to today’s dialogue among so many different voices! We are committed to provide a permanent platform for this much-needed dialogue. This is just the beginning!”. She also announced that the organisers will further analyse and disseminate the different proposals put forward, as to support the identification of sustainable and viable solutions for the future of Venice, its Lagoon and its inhabitants.