At the iconic Oslo City Hall, home of the annual Nobel Peace Prize Ceremony, around 600 people from all over Europe gathered on the evening of 11 June 2015 to pay tribute to this year’s winners of the EU Prize for Cultural Heritage / Europa Nostra Awards and to celebrate heritage as a driver of peace and sustainable development.
The announcement of the seven Grand Prix laureates and the unveiling of the Public Choice Award winner were among the highlights of this year’s European Heritage Awards Ceremony. Another memorable moment took place when the attendees lifted up #Unite4Heritage signs in a moving demonstration of support for UNESCO’s campaign to protect heritage threatened by violence and destruction across the world. The campaign is fully endorsed by both the European Commission and Europa Nostra. 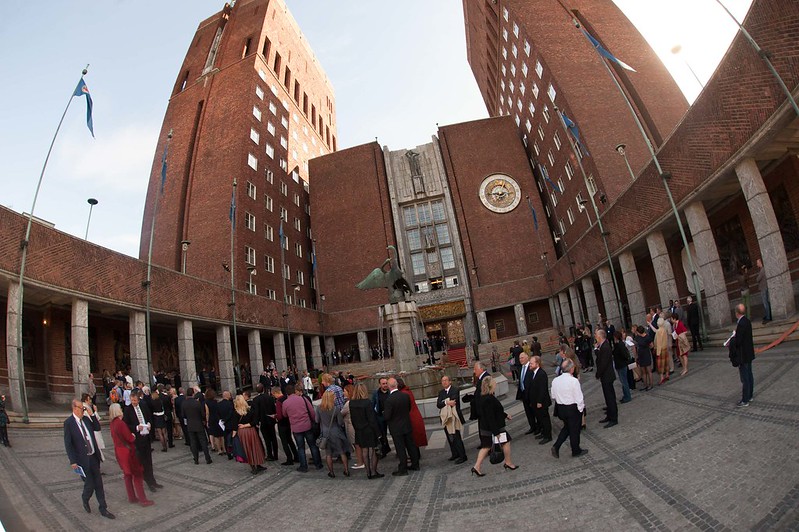 The 28 winners of the EU Prize for Cultural Heritage / Europa Nostra Awards, coming from 15 countries taking part in the EU Creative Europe programme, and the two winners of the Europa Nostra Awards, from European countries not taking part in that programme, namely Armenia and Russia, received the awards from the Juries’ Chairpersons of the four categories.

The seven Grand Prix were alternately announced by Tibor Navracsics, European Commissioner for Education, Culture, Youth and Sport, and Denis de Kergorlay, Executive President of Europa Nostra, on behalf of the President of the organisation, Plácido Domingo, who had to cancel his attendance due to sad family circumstances. HRH Crown Prince Haakon of Norway, who honoured the ceremony with his attendance, revealed the Public Choice Award winner.

Plácido Domingo, in an audio message specially recorded for the ceremony, stated: “In December 2012, the highest representatives of the European Union came to this same building to receive the Nobel Peace Prize. This Prize reminded us all that the European Union was and is a peace project. Tonight, Europa Nostra and I wish to remind you all that the building of Europe is also a cultural project, based on shared values and inspired by European ideals and heritage which have been shaped across generations and across borders. We firmly believe that we cannot achieve and preserve peace without investing in culture and education.”

“We strongly support the #Unite4Heritage campaign recently launched by UNESCO Director-General Irina Bokova. As Europa Nostra’s President and UNESCO Goodwill Ambassador, I believe that – across the globe – we must raise our voices, join our forces, and form a powerful alliance to promote the value of our cultural heritage and to defend it from many threats. We must especially condemn any deliberate destruction of heritage,” he advocated, referring to the recent attacks to millennia old cultural treasures in Iraq, Syria, Yemen and Libya.

In his speech, Commissioner Navracsics affirmed: “The EU has been actively supporting cultural heritage protection in Syria and Iraq. We have recently allocated €1 billion to address the crises in those two countries. I take this opportunity to express our full endorsement of UNESCO’s #Unite4Heritage campaign”.

“In the last two years, cultural heritage has become a key area of European cultural policy. The winners of our Awards play a central role in making the EU vision for heritage a reality. They are the ones who can turn principles into action, to nurture and enrich our expertise, our know-how, our common capital. They also highlight the role heritage plays when it comes to social inclusion and economic development,” stressed Commissioner Navracsics.

Following the welcome remarks by the Mayor of Oslo Fabian Stang, the Norwegian Minister of Climate and Environment Tine Sundtoft addressed the audience. “Cultural heritage is an important resource; it provides valuable contributions to a better environment, people’s welfare, employment, economic and green growth, regional and local development,” said Minister Sundtoft. “The Europa Nostra Congress and the European Heritage Awards Ceremony have shown how important it is to work together across Europe to share best practices,” she added.