The international conference “David Gareji – Multidisciplinary Study and Development Strategy” was held from the 18 to 20 April in Tbilisi, Georgia with a site visit to two monasteries within the complex: the David Gareji Lavra and Udabno. 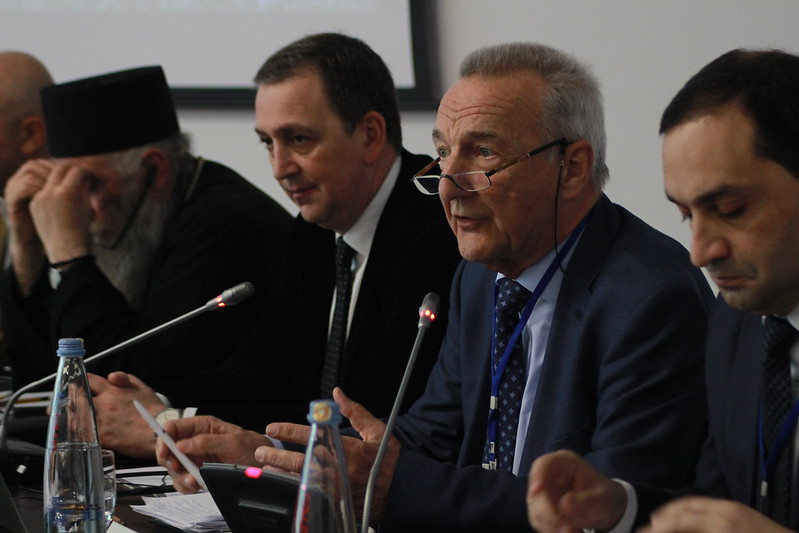 The monastery complex of David Gareji, founded in the 6th-century by Saint David Garejeli, one of the thirteen Assyrian fathers, and his disciples, is one of the unique sites of the Georgian Cultural and Natural Heritage. The site is comprised of more than twenty rock-hewn monasteries and several hundred sanctuaries and cave-cells. It is located in Eastern Georgia, on the semi-desert Iori plateau, and partly extends into neighbouring Azerbaijan. The monastery complex is registered as a Monument of National Importance of Georgia. It was submitted to the UNESCO World Heritage Tentative List in 2007, and was listed among the 7 Most Endangered heritage sites in Europe in 2018, a programme run by Europa Nostra and the European Investment Bank Institute as founding partner.

Aims of the International conference:

The conference was organised by the Georgian Arts and Culture Center / Europa Nostra Country Representation in Georgia, in cooperation with the National Agency for Cultural Heritage Preservation of Georgia and Europa Nostra / 7 Most Endangered Programme; and co-funded by the Shota Rustaveli National Science Foundation.

The welcome session was followed by key note speeches by Piet Jaspaert, Vice-President of Europa Nostra, on the topic “David Gareji, One of the 7 Most Endangered Sites of Europe”; and by Dr. Zaza Skirtladze, Head of the Institute of Art History and Theory, Ivane Javakhishvili Tbilisi State University and a founder of the Gareji Studies Center, highlighting the historical timeline and the main aspects of cultural development for medieval Georgian culture in the entire complex of the Gareji Desert Monasteries.

During three days nearly 40 scholars and representatives of Cultural heritage institutions from Georgia, Azerbaijan, Israel, Italy, Greece, and the USA studying and operating in the David Gareji desert’s cultural and natural heritage landmarks, discussed the existing challenges and paths to solutions in three Sections:

In the context of the conference, a report on the David Gareji mission as a result of inclusion of the David Gareji monasteries of the 7 Most Endangered Programme list, was presented by Gaianè Casnati, member of the advisory panel of the 7 Most Endangered Programme (IT) and Campbell Thomson, European Investment Bank Institute (UK) consultant. See detailed programme below. After the completion of the conference the proceedings of the presented papers will be published.

Local event for Georgian winners and 7 Most Endangered sites

In the context of the conference a local event presenting Europa Nostra in Georgia activities in Georgia, featuring Georgian laureates of the European Heritage Awards / Europa Nostra Awards, as well as acknowledgement of Georgian sites listed by the 7 Most Endangered programme took place on 19 April, hosted by the Tbilisi Zakaria Paliashvili Opera and Ballet State Theatre. The festive evening was opened by a Georgian National Ballet Sukhishvili Georgian dance performance and concluded with a presentation of Georgian polyphony performed by the Tbilisi State Opera assemble “Suliko.” At the ceremony, the Secretary General of Europa Nostra, Sneška Quaedvlieg-Mihailovic, named the Director of the Ballet Company of the Tbilisi Opera and Ballet State Theater, Prima ballerina Nino Ananishvili, as Honorary President of the “Europa Nostra Georgia.” A short documentary about Europa Nostra and Georgian winning projects was screened. The Awards were presented by the Ambassador of the EU to Georgia, Carl Hartzell, and honorary president of Europa Nostra Georgia prima balerina Nina Ananiashvili, while the Georgian sites listed in the 7 Most Endangered program were acknowledged by the Secretary General of Europa Nostra, Sneška Quaedvlieg-Mihailović. (See list below). The ceremony was attended by the President of Georgia, Salome Zurabishvili, and was welcomed by Michael Giorgadze, First Deputy Minister of Education, Science, Culture and Sports of Georgia. 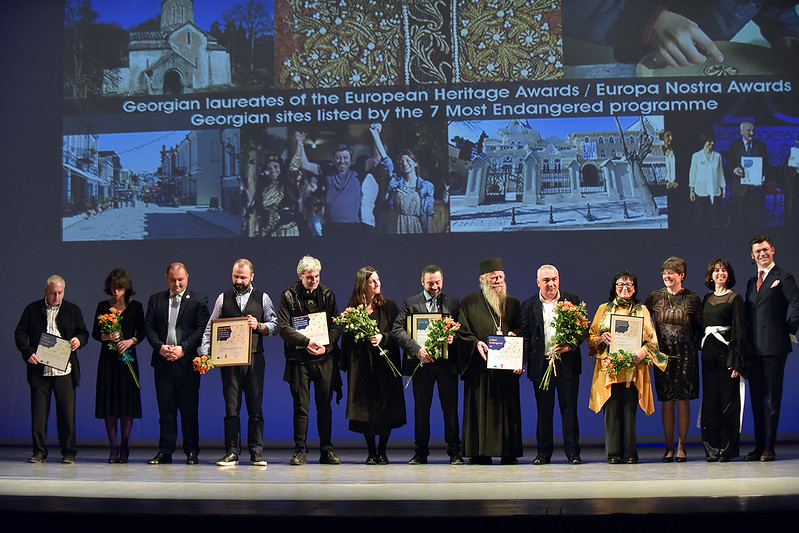 At the time of the conference, Europa Nostra Secretary General, Sneška Quaedvlieg-Mihailović, and Vice-President Piet Jaspaert had meetings with the President of Georgia, Salome Zourabishvili; with the first Deputy Minister of Education, Science, Culture and Sports; as well as with the representatives of the Azerbaijani Ministry of Culture, and the SECK “Keshikchidag” (the Azerbaijani name for the part of David Gareji monasteries located within Azerbaijan). At the meetings statements were offered regarding the need for close cooperation between Georgia and Azerbaijan to achieve solutions around the difficulties of safeguarding the entire complex. 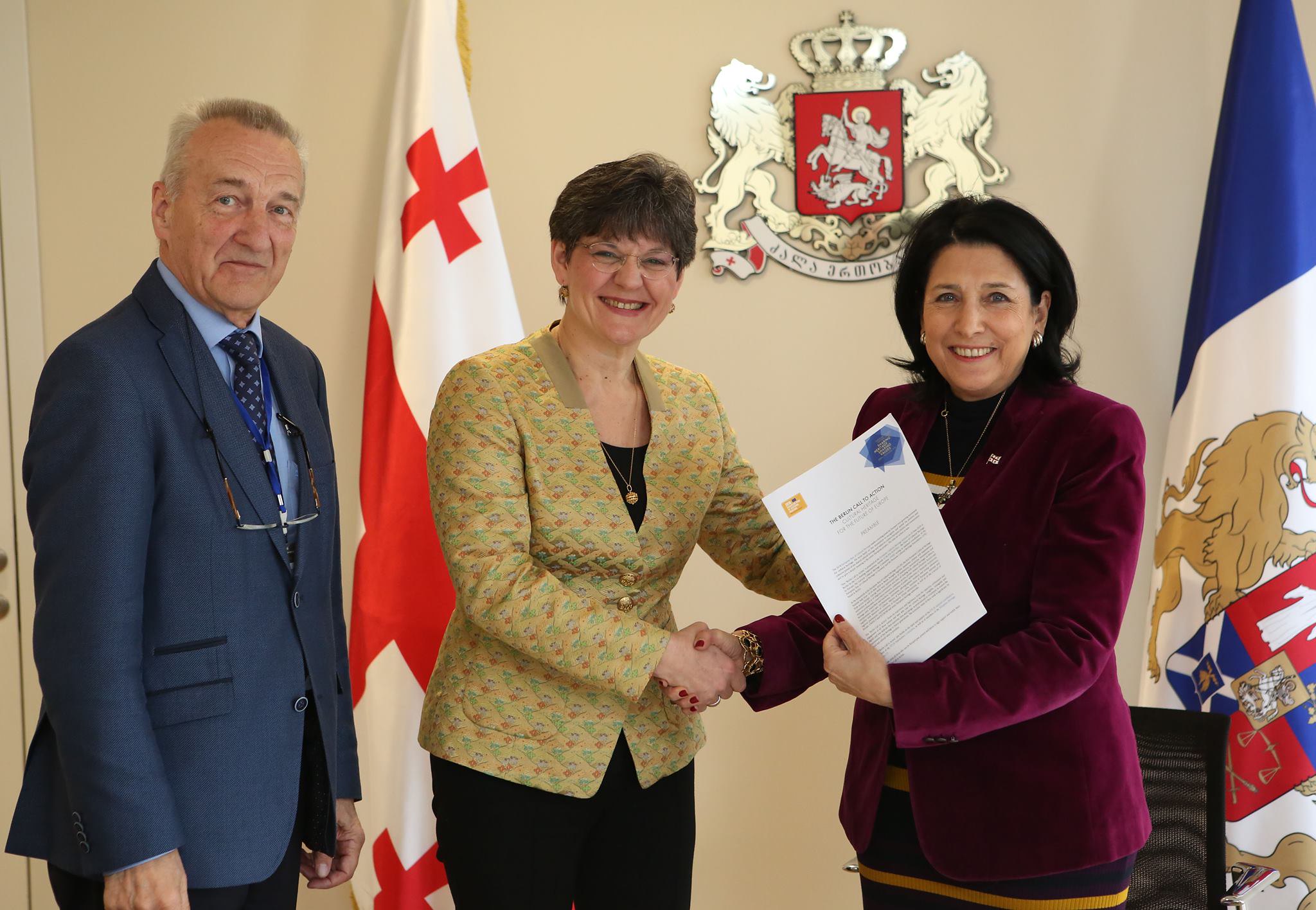 The 7 Most Endangered sites in Georgia

• Aerial Cableway Network in Chiatura, Shortlisted among of Europe’s 12 sites for the 7 Most Endangered Program 2018. The nominator Ministry of Culture and Monuments Protection of Georgia