The local award ceremony for the Turin Papyrus Online Platform (TPOP), winner of a European Heritage Award / Europa Nostra Award 2020 in the category Research, took place on 12 October at the Museo Egizio in Turin, Italy. Due to the safety precautions against COVID-19, the ceremony was held for a restricted group of 30 attendees, but attracted over 13,000 viewers on social media from all around the world in just a few days (watch video of the ceremony). In a video message, Hermann Parzinger, Executive President of Europa Nostra, praised the pioneering work of the Museo Egizio in digitising their unique collection of papyri and making it virtually accessible to anyone from anywhere and at any time. 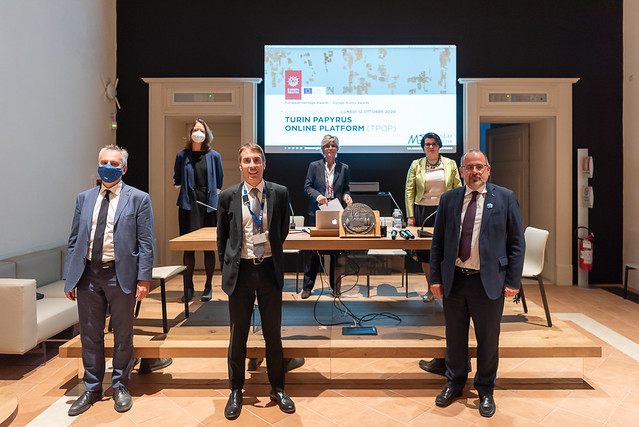 Sitting around the beautiful bronze award plaque in the conference room of the Museo Egizio, the speakers outlined how the importance that the museum gives to cultural research also reflects the priorities of the European Union’s policies.

Evelina Christillin, President of the Museo Egizio, pointed out the large investments that the museum has made to increase the scientific staff through recruitment and scholarships. This gave the possibility to achieve important goals such as the Turin Online Papyrus Platform.

The Papyrus Collection of the museum consists of nearly 700 whole or reassembled manuscripts and over 17,000 papyrus fragments, documenting over 3,000 years of written material culture in seven scripts and eight languages, originating from several locations. Since 2017 the Museo Egizio has been working to digitise their collection of papyri. In September 2019, the Turin Papyrus Online Platform (TPOP) was launched online, employing digital information technologies to make the collection virtually accessible across borders and disciplinary boundaries. The “virtual” conservation of papyri by means of their digitalisation and connection to a network has ensured the long-term preservation of written material and its accessibility by anyone from anywhere and at any time.

Hermann Parzinger, Executive President of Europa Nostra, underlined how these aspects were decisive in giving an Award to the TPOP project: “I know very well and admire the Museo Egizio, not only for its extraordinary collection, but also for its continuous effort to enhance the role of research and to underline the importance of sharing and making documentation available to scholars and enthusiasts alike. An attitude which is perfectly reflected in the project Turin Papyrus Online Platform. My heartfelt congratulations for this very well deserved European Heritage Award / Europa Nostra Award.”

The TPOP project can be considered a bridge between Europe and the Mediterranean, between museums, universities and archives, as well as between conservation, restoration, research and digital innovation in the field, noted Maria Cristina Vannini, Member of the Heritage Awards’ Jury.

Luca Jahier, President of the European Economic and Social Committee, and Massimo Gaudina, Head of the Representation of the European Commission in Northern Italy, underlined the importance of digitisation, as well as giving open access to research data done on archaeological heritage material to the non-scientific public and emphasised the importance of the online access to research on museum material, crossing European borders to reach other scholars from all over the world.

Christian Greco, Director of the Museo Egizio, presented the masterpieces of the extraordinary written heritage of the museum, and Susanne Töpfer, Curator and Project Manager of the TPOP, showed how the platform works. In the future, TPOP will include all the papyrus material held in the Museo Egizio and could also become a “European Papyrus Online Platform” to connect the collections of Egyptian written material stored in many different European cultural institutions. This would unite collections and fragments of writings in a way that would not be possible in the physical world.