On Friday 11 October a Local Award Ceremony was held to celebrate the achievements of the stakeholders involved in the restoration of the Cathedral of Saint Bavo in Haarlem. Their dedicated efforts to not only restore the place of worship to its former glory, but also to enhance its position as a contemporary centre for cultural and social gatherings, have been rewarded with the European Heritage Award / Europa Nostra Award 2019 in the category Conservation. Around two hundred people attended the ceremony to witness the unveiling of the bronze Awards plaque, including officials, heritage experts and members of the parish. 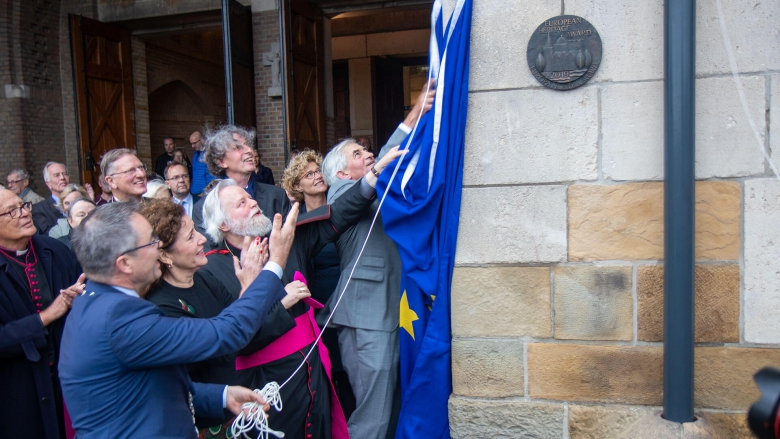 The programme of the ceremony consisted of a series of speeches, interspersed with musical performances. These were provided by the crystal clear voices of the Cathedral’s Choir and the mighty sound of the twin-organs, an instrumental feature that is unique to the Saint Bavo Cathedral and allows two organists to play simultaneously and in harmony.

The public was welcomed by Wim Eggenkamp, the chairman of the foundation Kathedrale Basiliek Sint Bavo, and the driving force behind the transformation of the Cathedral. He took the time to thank everyone involved, in particular Egbert van Hoogevest, whose efforts had been instrumental in the 12-year long restoration process.

This was followed by a speech from the Minister of Education, Culture and Science, Ingrid van Engelshoven, who emphasised the necessity to come up with alternative ways to preserve religious buildings in an ever-secularising society, since their presence is crucial to European history and culture. On this note, Ms. van Engelshoven congratulated the team behind the restoration of Saint Bavo for expanding its use to include the cultural and social sectors. She further added that the visibility of the bronze plaques throughout Europe is a reminder of our shared past and heritage, and it supports a belief that is as strong as the foundations of the Cathedral.

The third speaker to address the audience was the acting representative of the European Commission in the Netherlands, Klasja van de Ridder. Her speech focused on the important position that cultural heritage takes in the policy of the European Commission, as proven by the numerous projects that are subsidised by the institution. She also mentioned how attached Europeans are to their cultural heritage, and how it creates growth and employment across the European Union. As such, the Awards are instrumental in reflecting our communal and diverse past.

Huub Doek, the Treasurer of Europa Nostra, introduced the public to the pillars and objectives of Europa Nostra, and shared some statistics on the Awards scheme to indicate just how impressive the achievement of the team behind the restoration of the Saint Bavo Cathedral actually is. He congratulated Wim Eggenkamp for his life-long dedication to the preservation of Dutch heritage, stating that The Netherlands owe him a lot of respect and gratitude for his commitment.

The Bishop of the Diocese of Haarlem – Amsterdam had the last word. Succinctly, he thanked everyone involved in creating “something grand”, a unique and harmonious mixture of old and new that appeals to everyone. With a final prayer, the ceremony was finished and people gathered outside to witness the mayor of Haarlem and the Minister of Education, Culture and Science unveil the bronze plaque, which now enjoys pride of place on one of the front pillars of the Cathedral.