The Spanish winners of the EU Prize for Cultural Heritage / Europa Nostra Awards for 2013 and 2014 were honoured at a high-profile ceremony presided over by HM Queen Sofia of Spain at the National Archaeological Museum in Madrid on 17 April 2015. On this occasion, tribute was also paid to the winners of the Hispania Nostra Awards for 2013 and 2014. The ceremony was attended by dozens of heritage and cultural professionals, volunteers and supporters, and representatives from national, regional and local authorities, including the Secretary of State for Culture, José María Lassalle; the President of Hispania Nostra, Araceli Pereda; the Council member of Europa Nostra and Chairman of the Jury for Conservation for 2012-2013, José-Maria Ballester; and the Director of the National Archaeological Museum, Andrés Carretero. 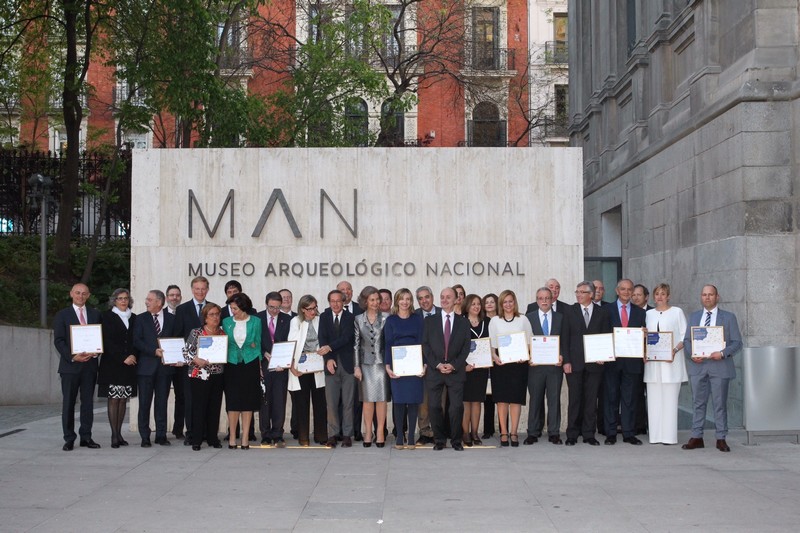 HM Queen Sofia with the Spanish Award winners of 2013 and 2014 after the ceremony held at the National Archaeological Museum in Madrid on 17 April 2015. Photo: © Casa de S.M. el Rey

In the past two years, a total of ten outstanding achievements from Spain received an EU Prize for Cultural Heritage / Europa Nostra Awards.

In 2013, the Jury gave Awards to the Conservation projects of the Northern Romanesque in Castile and León, the Fountain of the Lions in Granada, the Roman Theatre in Medellin (Grand Prix), and the Abadia Retuerta LeDomaine in Sardón de Duero in Valladolid; the Research project on the Granaries on Stilts in Castropol; and the Awareness-Raising project on the Living Cabanyal Archive in Valencia.

In 2014, the Jury presented Awards to the Conservation projects of the Cooperative Wineries Programme in Catalonia (Grand Prix); the Historical Landscape of El Sénia’s Ancient Olive Trees, as well as to the Roman Bridge, Gate of the Bridge, Calahorra Tower and Surrounding Areas in Cordoba; and also to the Research project on Van Dyck in Spain.

The EU Prize for Cultural Heritage / Europa Nostra Awards is Europe’s highest honour in the heritage field. It was launched by the European Commission in 2002 and has been run by Europa Nostra ever since.

The Hispania Nostra Awards were set up in 2012 by Hispania Nostra in partnership with the Banco Santander Foundation with the aim of contributing to the dissemination of best practices in the heritage field in Spain. HM Queen Sofia has been Honorary President of Hispania Nostra since 1978.