The renowned opera singer and President of Europa Nostra Plácido Domingowas conferred the honorary title of Professor, one of the most prestigious in Austria, during the European Heritage Awards Ceremony at the Burgtheater in Vienna, on the evening of 5 May. The title was presented to Maestro Domingo by Chancellor Faymann. “He has been a great ambassador for Austrian culture all over the world. For that, we are both honoured and grateful,” highlighted Minister Ostermayer. 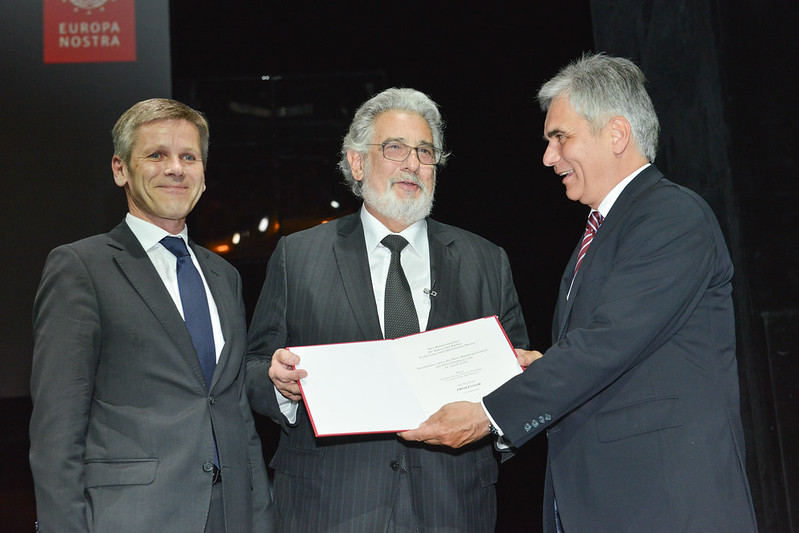 “Plácido Domingo is one of the most extraordinary singers and greatest all-around musical talents of our time. For decades, he has brought joy to people all across the world. Mr. Domingo and his art have also greatly enriched Austria. He has graced the Vienna State Opera alone with no less than 242 performances as a singer or conductor since 1967. Plácido Domingo has been a great ambassador for Austrian culture all over the world. And given that he celebrated his 40th stage anniversary with a gala evening at the Vienna State Opera in 2007, it would seem that he appreciates Austria as much as we appreciate him. For that, we are both honoured and grateful,” stated Josef Ostermayer, Austrian Federal Minister for Arts, Culture, Constitution and Public Service.

“This is a great honour. Thank you to the wonderful public of Vienna, which has been very generous over so many years. Your love of music, arts and culture is admirable. Vienna has one of the most impressive conglomerations of theatres in Europe: the Wiener Staatsoper, the Theater an der Wien, the Burgtheater, and so many others. I am deeply moved to receive this recognition here in Vienna,” revealed Plácido Domingo, after being presented with the title by Austrian Federal Chancellor Werner Faymann.

The tribute to Maestro Domingo was paid at the end of the European Heritage Awards Ceremony, a major cultural event held under the patronage of the Federal President of Austria, Heinz Fischer, which gathered 1,200 people from all over Europe at the Burgtheater in Vienna. At the ceremony, the President of Europa Nostra and the European Commissioner for Education, Culture, Multilingualism and Youth, Androulla Vassiliou, presented awards to the 27 winners of the 2014 European Union Prize for Cultural Heritage / Europa Nostra Awards and unveiled to the public the six Grand Prix laureates. The winner of the Public Choice Award was also announced. The event featured inspiring musical performances by the great Viennese ensemble The Philharmonics, as well as the Vienna Boys’ Choir and the children’s choir Superar.