The Rode Altarpiece Research and Conservation Project received the EU Prize for Cultural Heritage / Europa Nostra Award during a memorable ceremony held on 13 October at the Niguliste Museum in Tallinn. The museum is housed in St. Nicholas’ Church and is a part of the Art Museum of Estonia. The presentation ceremony was attended by a top-level delegation from Europa Nostra and the European Investment Bank Institute, museum and heritage professionals, students and professors and art lovers from all over the country. 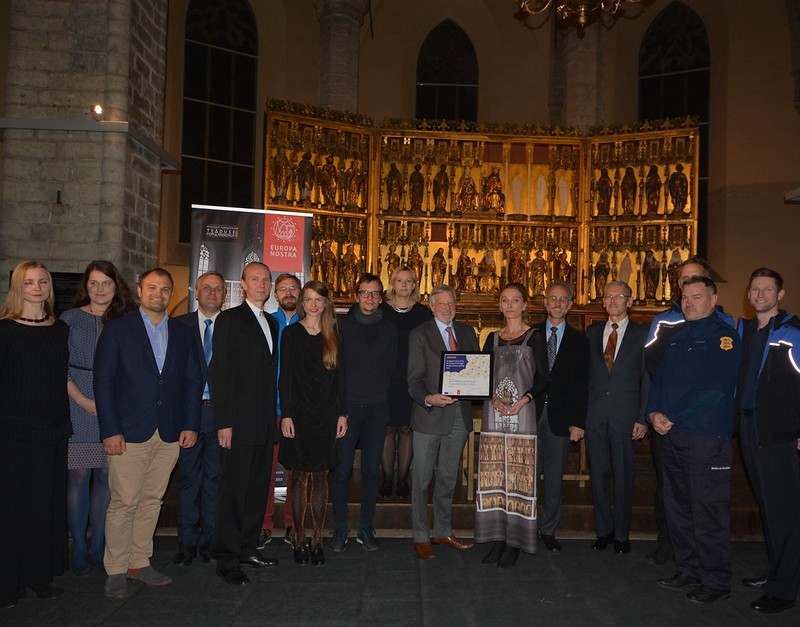 John Sell, Executive Vice-President of Europa Nostra, Paolo Vitti, Member of the Awards’ Jury in the category Research, Keit Kasemets, Head of the European Commission Representation in Estonia, Sirje Helme, Director General of the Art Museum of Estonia, and Tarmo Saaret, Director of the Niguliste Museum, addressed the audience. Tiit Kiik, who is one of the best organ players in Estonia, contributed to the beautiful ceremony with his outstanding performance of Estonian and European music. For those who could not attend the award ceremony, the national television station ERR and several radio channels broadcasted the event.

The Rode Altarpiece Research and Conservation Project concentrated on the retable of the high altar of St. Nicholas’ Church, which was completed in the workshop of the Lübeck master Hermen Rode. Rode’s Altarpiece is one of the most impressive and best preserved examples of late medieval Hanseatic art in the whole of Europe.

The project stood out for its interdisciplinary and collaborative approach to research. In addition to the study and conservation of the winged altarpiece, the project also brought together specialised scientific resources of various technical fields of research. Within the framework of the Rode Altarpiece Research and Conservation Project, an interdisciplinary group of researchers from the sciences and the humanities worked closely together.

The new knowledge which has emerged from this research forms the basis for further development in the heritage field in Estonia, Europe and beyond.