It is with great sadness and profound respect that Europa Nostra pays tribute and expresses its gratitude to His Royal Highness the Prince Consort of Denmark who passed away on 13 February 2018. Prince Henrik was the President of Europa Nostra for a period of 17 years, from 1990 to June 2007. His Presidency marked a phase of unprecedented growth and development for our organisation, which is today recognised as the true “Voice” of cultural heritage in Europe. 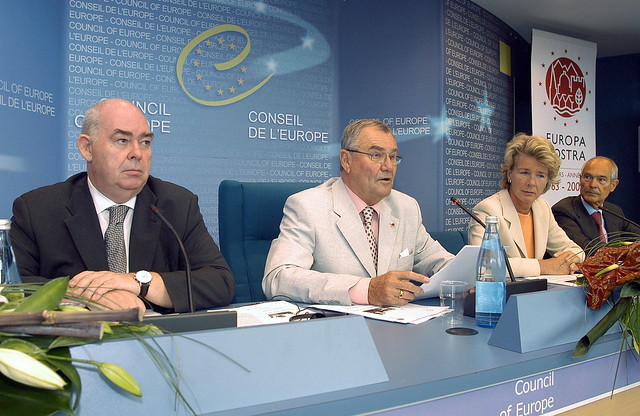 Greatly committed and dedicated to our work, Prince Henrik never missed a General Assembly or a Council meeting of Europa Nostra, a European Heritage Awards Ceremony or any other event for which his presence was important. From The Hague in 1990 to Stockholm in 2007, via Istanbul, Milan, Budapest, Cardiff, Vienna, Warsaw, Berlin, Madrid, Naples, Prague, Lucerne, Dubrovnik, Strasbourg, Munich, Bergen, Malta…, he toured with us around Europe, and hosted several meetings in Denmark and also in his Chateau de Caix near Cahors in France.

Prince Henrik’s wise and prudent advice was highly valued for any action aimed at the promotion of Europe’s cultural heritage, or in any situation of threat to this heritage. The members of Europa Nostra will always have very fond memories of his frankness and his affability, which made dialogue easy and reinforced the team and family spirit within a European organisation that owes so much to him for its current expansion. Members of the governing bodies and the International Secretariat of Europa Nostra were always appreciative of his attentive concern regarding the issues at stake in our organisation, especially at a time when Europe was at a turning point in its history.

The Prince Consort of Denmark became President of Europa Nostra in 1990, only a few months after the fall of the Berlin Wall which marked the beginning of a new era for the countries of Central and Eastern Europe. Our continent was finally becoming a vast space of democracy and security based on shared values. Our cultural heritage proved to be a key factor in this new European momentum, opening up new horizons for the objectives and activities of Europa Nostra. At that time, accepting the Presidency of our organisation was an act of courage and evidence of Prince Henrik’s dedication to European ideals. By doing so, Prince Henrik took up the task of continuing the work of his two predecessors who were both strongly committed to a united Europe: Lord Duncan-Sandys, former British Minister, Member of Parliament and Chairman of the Sub-Committee on Cultural Heritage of the Parliamentary Assembly of the Council of Europe, and Hans de Koster, former Minister of the Netherlands, who chaired the Committee of Ministers and subsequently the Parliamentary Assembly of the Council of Europe.

The contribution of Prince Henrik to Europa Nostra was decisive: consolidating our organisation among others by establishing its headquarters in The Hague (The Netherlands) with a permanent and efficient Secretariat, as well as developing its collaboration with the European Union and enlarging our citizens’ movement for cultural and natural heritage throughout Greater Europe. This latter task was especially dear to Prince Henrik’s heart: he was always keen to learn about the needs and concerns of associations and communities committed to cultural heritage in the countries of Central and Eastern Europe and he was always delighted to discover heritage sites in this part of Europe and to offer them Europa Nostra’s full support.

Prince Henrik’s diplomatic skills and finesse were a great asset to help us ensure the right balance for our relationship with the Council of Europe, the Strasbourg-based institution linked to the origins of Europa Nostra, and with the European Union, of which our organisation has become a valued partner representing civil society. Let us in particular mention that it is under his mandate that the medals and diplomas of Europa Nostra became in 2002 the European Union Prize for Cultural Heritage / Europa Nostra Awards. All in all, following the successful merger of the International Castles Institute (IBI – Internationales Burgeninstitut) with Europa Nostra, our organisation has grown to become the largest European non-governmental network bringing together civil society representations active in the field of cultural and natural heritage across our continent.

All of these significant achievements reflect the great dedication to the mission and activities of Europa Nostra by HRH the Prince Consort of Denmark, whom we will always remember with gratitude, affection and respect.