The outstanding Bosch Research and Conservation Project (BRCP), Grand Prix winner of the EU Prize for Cultural Heritage / Europa Nostra Award 2017 was celebrated at a special event held on 23 November at the Radboud University in Nijmegen, the Netherlands. The project’s team members Jos Koldeweij, Matthijs Ilsink and Luuk Hoogstede received the Grand Prix from Europa Nostra’s Board Member Astrid Weij and Treasurer Huub Doek. The festive event closed the second day of the ‘Europe Contested’ conference that brought together experts from across the globe as well as people keenly interested in Europe’s cultural heritage. 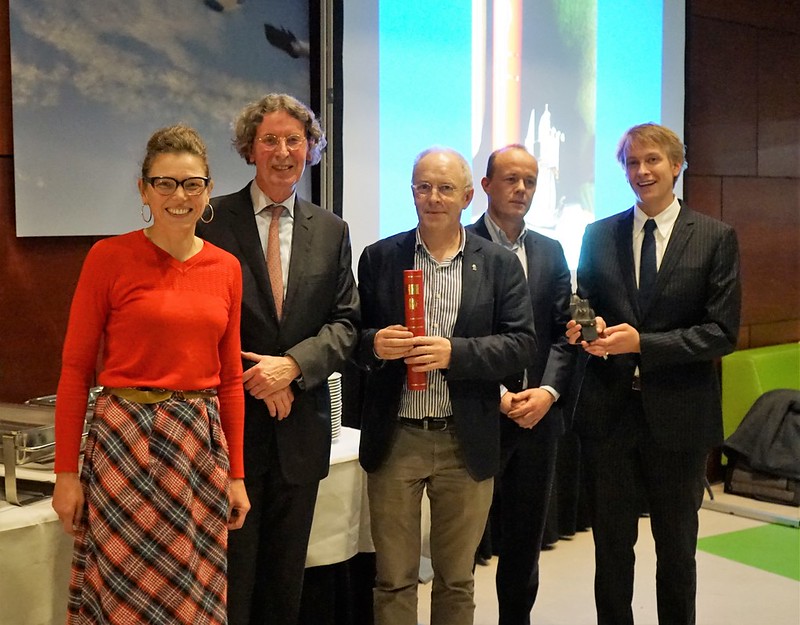 “Five centuries ago, long before the European Union and its contentedness, Jheronimus Bosch’s work transcended borders and language barriers. Now, for the first time in art history, the entire oeuvre of a single artist has been visually documented, across the globe, using standardized methods,” stated Luuk Hoogstede. “Furthermore, the project’s team efforts to preserve Bosch’s paintings resulted in conservation treatments that have enabled better understanding, appreciation and preservation of Europe’s cultural heritage,” he added.

2016 marked the 500-year anniversary of the death of the world-famous painter Hieronymus Bosch. Following seven years of dedicated research, the project’s team unveiled a trove of new information about the artist and his surviving work, which is published in a two volume monograph and is accessible through the innovative website boschproject.org. In the Bosch year and the build-up to it, no less than 11 conservation treatments were undertaken and two spectacular exhibitions took place in ‘s-Hertogenbosch and Madrid, which were visited by over 1 million people.

Professor Dr. Daniël Wigboldus, Chairman of the Board of the Radboud University, emphasised the results of the Bosch Research and Conservation Project as a multifaceted art historical project with a great societal impact.

The initiative for the BRCP was taken by the city of ‘s-Hertogenbosch and rapidly grew into an ambitious and international endeavour. The Bosch Research and Conservation Project is a collaboration between the Radboud University, Het Noordbrabants Museum and the Jheronimus Bosch 500 Foundation.

“The entire process of this project is exceptional. The efforts of the various stakeholders in the public sphere to mobilise all of the concerned parties to deliver such an outstanding result, including an international exhibition and a wide dissemination of the results, is wonderful. The comparably small team has evidently worked with devotion and with a keen understanding of the historical, cultural and social context of Bosch”, affirmed Astrid Weij, Board Member of Europa Nostra, quoting the Awards’ jury citation.