The results and recommendations of the rescue missions to ‘The 7 Most Endangered’ monuments and sites in Europe in 2014 were presented and discussed by heritage and financial experts from Europa Nostra, the European Investment Bank Institute (EIB-I) and the Council of Europe Development Bank (CEB) on 20 February 2015, during the meeting of the Board of Europa Nostra at the organisation’s office in Brussels. The videos of the visits to the sites were released on this occasion. The final technical and financial reports will be made public in the coming weeks. 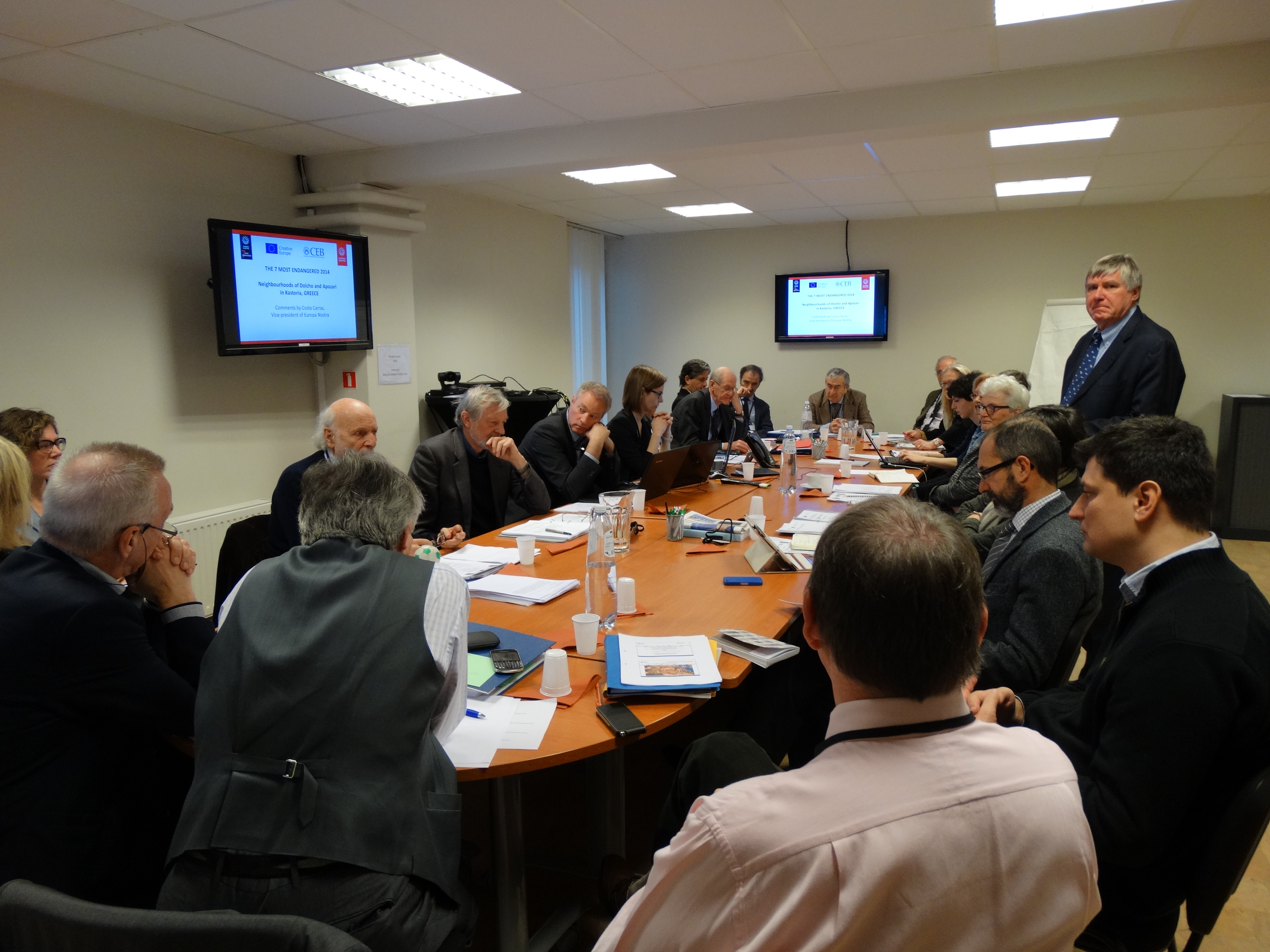 Representatives from Europa Nostra, EIB Institute and CEB discussed the results of the visits to ‘The 7 Most Endangered’ sites 2014 in Brussels on 20 February 2015. Photo: Europa Nostra

The session was chaired and moderated by Guy Clausse, Dean of the European Investment Bank Institute, founding partner of the ‘The 7 Most Endangered’ programme. Campbell Thomson, Adviser from the EIB-I, presented the outcomes of the working visits to the historic stage machinery of the Bourla theatre in Antwerp (Belgium), and to the citadel of Alessandria (Italy). Peter Bond, on behalf of the EIB-I, delivered the results of the missions to the carillons of the Mafra National Palace (Portugal), and to the wooden churches in southern Transylvania and northern Oltenia (Romania). Richard Deeley, Technical Consultant provided by the EIB-I, presented the findings of the working visit to the Synagogue in Subotica (Serbia). Following a short introduction made by Luca Schio, Head of European and International Cooperation at the Council of Europe Development Bank, associate partner of the programme, Pedro Ponce de León, also representing the CEB, spoke about the results of the mission to the neighbourhoods of Dolcho and Apozari in Kastoria (Greece). The mission related to the Colour Row Settlement in Chernyakhovsk (Russia) is expected to take place later in the year.

On the basis of the outcomes of this fruitful meeting, the technical and financial reports on the six sites are being finalised and will be made public in the coming weeks.

Michel Magnier, Director for Culture and Creativity at DG EAC of the European Commission, also joined the meeting. In his address, Magnier expressed his “great appreciation for the work of Europa Nostra”. He congratulated all partners of ‘The 7 Most Endangered’ programme on “this exemplary initiative and cooperation”, which is now supported by the Creative Europe programme of the European Union, through the networking project ‘Mainstreaming Heritage’.

Magnier noted the ‘The 7 Most Endangered’ programme’s commitment to integrating the sites into the life of the local communities as well as to involving local stakeholders in heritage management. In this respect, he mentioned the OMC working group of national experts which will focus on participatory governance of cultural heritage starting next April, in line with the EU Council’s Work Plan for Culture 2015-2018.