On 28-30 October, heritage and financial experts from the leading European heritage organisation Europa Nostra and the European Investment Bank Institute visited the carillons of the Mafra National Palace, Portugal, listed among ‘The 7 Most Endangered’ monuments and heritage assets in Europe in 2014, and met with local and national stakeholders to discuss the rehabilitation and financial plan of these outstanding musical instruments. The restoration of the largest 18th century carillons in the world is estimated to cost two million euro. The specialists will help formulate a detailed action plan before the end of this year. 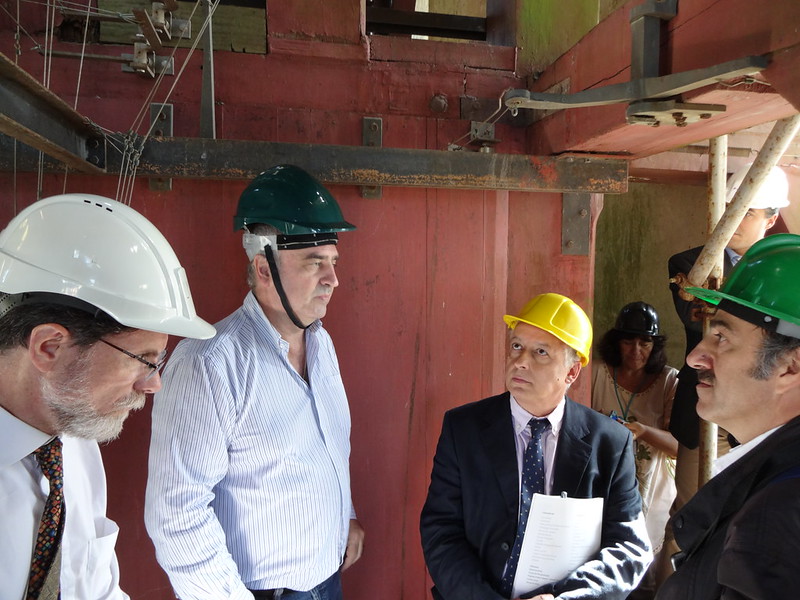 The two towers of the Mafra National Palace feature a unique set of 120 cast bronze bells, divided into hour, liturgical and carillon bells. The northern-tower carillon has never been altered, and therefore provides a rare example of the sound of bell-performance in its original tuning condition. Due to lack of maintenance or poor conservation, the wooden structures that support the bells are at risk of collapse. Emergency work to stabilise the structures has been undertaken but transnational expertise and financial support are needed to save these gems of our tangible and intangible heritage.

The delegation was comprised of Pedro Ponce de Léon, Member of the Scientific Council of Europa Nostra, and Peter Bond, technical consultant provided by the European Investment Bank Institute. On behalf of the Centro Nacional de Cultura, which made the nomination for ‘The 7 Most Endangered’ programme, its President, Guilherme d’Oliveira Martins, and its Director General, Teresa Tamen, were in attendance.

On 28 October, the delegates participated in a technical visit to the carillons and in a guided tour through the Mafra National Palace, considered a key work of the Baroque in Portugal, which was led by its Director, Mário Pereira dos Santos. The technical and financial meetings took place the next day also at the Palace. Besides the representatives from the Directorate-General for Cultural Heritage and the municipality of Mafra, experts in musical sciences, mechanics, chemistry, geology, architecture and civil engineering from some of the most prestigious Portuguese universities took part in the discussions. On 30 October, the delegation gathered with the cabinet of the Secretary of State for Culture, Jorge Barreto Xavier, in Lisbon. The discussion of financing models and the participation of the Portuguese State in the financial plan for the rehabilitation of the carillons dominated the agenda.

“The Mafra Palace complex is unique in many ways but notably for its musical components, namely its six organs and its two sets of carillons. The focus of the technical visit by the Europa Nostra and European Investment Bank Institute team was on the restoration and repair of the carillons and the associated bells and clocks. The preliminary impressions after the visit and discussions were very positive. There is clearly a need to restore to working condition the carillons and other bells, thus adding to the already significant attraction and interest of the Palace complex. The preparatory work and investigations have been thoroughly and professionally carried out by leading Portuguese experts in musicology and structures. The next phase is to refine these proposals with a focus on seeking financing and, in due course, to launching the works. The team was impressed by all that it saw and the manner in which this worthwhile project is being prepared and supported,” stated Peter Bond.

There is political willingness to move quickly forward the intervention. All parties involved, from the local municipality to the Secretary of State for Culture, are committed to implementing this project of national and international importance.

“Nowhere else in the world is there a basilica with six organs of such high artistic and historic values and two carillons of this size and significance. The restoration of the carillons would strengthen the links of the monument to music, through exchanges with universities and music schools. It would also help to attract new audiences and stimulate the integration of the Mafra Palace, which receives around 250.000 visitors per year, into the national and international tourism and musical circuits,” stated Guilherme d’Oliveira Martins.

The President of Europa Nostra, Maestro Plácido Domingo, has expressed the wish to sing at the Basilica of Mafra accompanied by the six pipe organs, which were masterly restored and received a European Union Prize for Cultural Heritage / Europa Nostra Awards in 2012. “I hope the two carillons will be restored soon, so that the sound of the bells can be enjoyed for many years and by many generations to come,” affirmed Maestro Domingo, in a special message read at the award-giving ceremony of the Helena Vaz da Silva European Award 2014 held in Lisbon on 3 October.