The results and recommendations of the rescue missions to The 7 Most Endangered monuments and sites in Europe in 2013 were presented and discussed by heritage and financial experts from Europa Nostra, the European Investment Bank Institute (EIB-I) and the Council of Europe Development Bank (CEB) on 6 December, during the meeting of the Council of Europa Nostra at the EU Office of the Randstad Region from the Netherlands, in Brussels. National and local participants in those missions added their valuable contribution to the discussion, which was moderated by John Sell, Executive Vice-President of Europa Nostra and chairman of ‘The 7 Most Endangered’ programme. The detailed technical reports can be read online. 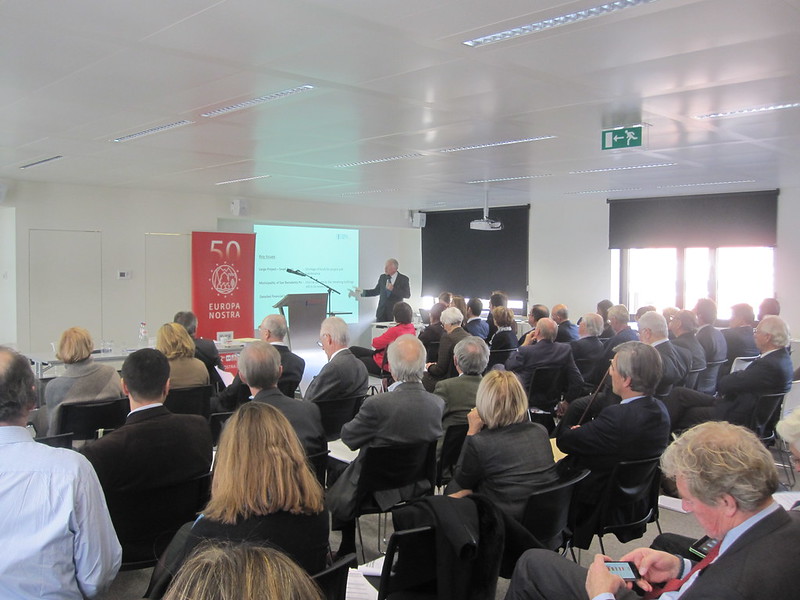 Guy Clausse, Director and Special Advisor at the European Investment Bank, presented the outcomes of the working visit to Vauban’s 17th century fortifications in Briançon, France. Peter Bond, representative from the EIB-I, founding partner of the programme, delivered the results of the missions to the buffer zone of the historic centre of Nicosia, Cyprus, and to the 15th century monastery in Setúbal, Portugal. Richard Deeley, on behalf of the EIB-I, presented the outcomes of the working visits to the Renaissance monastery of San Benedetto Po, Italy, and to the Armenian church of St. George in Mardin, Turkey. Urbano Murillo, in representation of the CEB, an associate partner of the programme, spoke about the results of the mission to the Roman amphitheatre in Durrës, Albania. Denis de Kergorlay, Executive President of Europa Nostra, spoke about his visit to Bucharest on 19-20 November to discuss ways to ensure a sustainable future for Roşia Montană.

In addition to the specific reports, a general report about ‘Funding sources for preserving Cultural Heritage Monuments and Sites’ can also be read online. Prepared by Guy Clausse of the EIB-I, this document provides to individuals and associations interested in heritage preservation, and notably in ‘The 7 Most Endangered’ programme, a non-exhaustive overview on possible funding sources to support their projects.